Tired of Sex: The Unerotic Eroticism of ‘Nymphomaniac: Vol. I’ 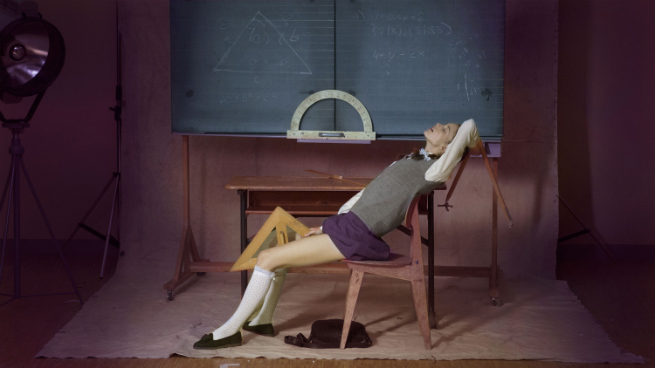 Present-day Joe is played by Charlotte Gainsbourg, a three-time participant in von Trier projects and the daughter of beloved French perv Serge. Her character’s younger teens and twenties self, billed as Young Joe, is played by newcomer Stacy Martin. Young Joe is very beautiful and aggressive, driven at first by competition with an equally beautiful and aggressive blonde friend to see how much emotionally detached sexual experience they can accumulate for sport. As the years go by, she is driven by competition with herself to see exactly how far she can take it without dying in the process. Because of her physical beauty and ambition, she is able to amass a large collection of male lovers without a ton of effort. She feels so little for them, the movie suggests, that she determines their future interactions by rolling a die to decide whether to dump them. However debasing the sex might be, Joe very rarely faces the most debasing thing of all: rejection.

For all her libertinism, Joe is a bit of a pill, as very self-centered people usually are. She never extracts an ounce of joy from her sexual adventures, or even from recounting them to framing device Seligman (Stellan Skarsgård). Hopefully you’d at least get some pleasure out of turning your humiliating and painful bohemian experiences into funny stories, but Joe hardly ever cracks a smile. Nor does she even seem to get off on the power of ruining men’s lives by seducing them away from other women, although she’s also not particularly troubled while meeting one such man’s wife (Uma Thurman) and children. Thurman’s entrance into Nymphomaniac: Vol. I is a jolt of electricity. Finally, after an hour of rutted ennui, we get to watch somebody feel passion onscreen! Joe never feels affected by the consequences of her activities, and so she never even tries to change. She behaves like Candide, or perhaps the horny female Terry Southern version, Candy, but instead of a conviction that humans are good she has instinctive faith in pure nihilism. Joe believes in following her arrow, wherever it goes, even if she pierces a few people’s lives (including her own) on the way and eventually flies off a cliff.

The reasons for Joe’s descent into sex addiction are never fully explained, although that may be part of Volume II. It’s nice that it’s left ambiguous and not necessarily prompted by any one event in her life, although the death of her father, played by Christian Slater, is suggested as a motivating factor, being one of the few times Joe openly breaks down. From birth Joe sets out in search of intimacy and connection via her genitals and finds only alienation from her partners and own body. She loses her virginity to a cute moped tough named Jerôme (Shia LaBeouf), but the act itself is extremely underwhelming. Having had her romantic fantasies about sex punctured, Joe assumes a pose of cynicism that is mostly self-protective, a Plexiglas wall that prevents her from getting hurt. She fears losing control of herself to a man, and so sets out to control men preemptively, as well as her own feelings. This is the most obvious reason why she can’t get no satisfaction, although her resolve is tested when Jerôme appears in her life again. No matter how perverse Joe’s anecdotes become, Seligman continually reassures her that she is perfectly normal, relating her desires and actions to predator/prey relationships in nature, and more obscurely, to Fibonacci numbers.

In failing completely as pornography, Nymphomaniac: Vol. I succeeds and excels as an extremely dark satirical comedy. It’s Danish filmmaker von Trier’s parody of stereotypical European art films that use “art” as a cover for erotic nudity, particularly all the gauzy soft-core movies by male directors about the sexual budding of young women coming of age. The 1933 Czech film Ecstasy showed the first scenes of copulation and female orgasm (via Hedy Lamarr) in a non-pornographic film, and ever since, European films have pushed the boundaries of what can be shown onscreen, in a way American theatrical films are rarely allowed to without risking the wrath of the MPAA. The 1967 Swedish New Wave film I Am Curious (Yellow) became a hit in America and a cultural sensation for reasons having much to do with its naturalistic nudity and sex scenes. Yellow features one scene in which the heroine kisses her lover’s soft member that caused it to be banned in Massachusetts.

No matter how many unfulfilling sexual jaunts Joe embarks on, it never really occurs to her to try channeling all that energy into something else, although she does flirt with botany a few times. She becomes bored with penises of all varieties (which flash as pictures onscreen in a slide show). She approaches sex as a survey, cataloging and comparing male bedside manners: brutish, sentimental, bossy, shy. Her anhedonia compels her to create one chaotic sexual disaster after another for herself without ever gaining the ability to reflect on her mistakes. The punch line of this long joke? “The secret ingredient of sex is love.” That’s right, von Trier is a romantic! The kind of romantic who wears his heart on his close-ups of LaBeouf tenderly licking a nipple.

Like its pseudo-predecessor, Paul Verhoeven’s Showgirls, or Steve McQueen’s masculine version, Shame, Nymphomaniac: Vol. I isn’t really about sex, it’s about striving. They promise explicit realistic sex and then deliver on that promise until you wish you’d never asked, like a porn that continues playing on after climax. The film has moments of eroticism but refuses to sustain them. They are mere flashes, beckoning Joe further down the path of most nonexistence while she chases an ever receding horizon of pleasure. Any initial lust to see sex scenes devolves into groans of exhaustion as Joe launches into another yarn about how boring it was to fuck seven or eight men a night. And then just when you think you’re out, Nymphomaniac pulls you back in. The movie is extremely fun in its own sick little way, as a comment on gender and sex. Nymphomaniac is completely sexually outrageous, just not in the way that you’d think.

‘Entourage’ Movie Shocker! Jeremy Piven Does Not Think the Cast Is the Best He’s Ever Worked With