Metals and Feist’s Escape From the Mainstream 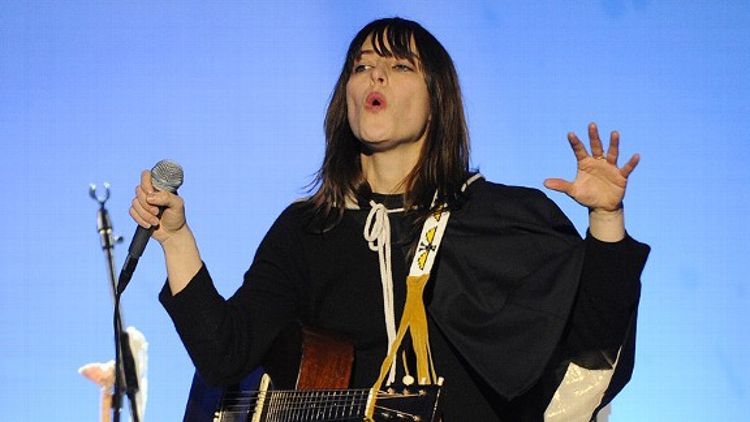 What’s the point of being a musician? The most basic answer might be, “To make music for people to hear.” Many believe in buzzband utilitarianism, where the goal of a perfect band is to make the best music so that it can reach the largest amount of people who enjoy it, regardless of their reasons for enjoying it. While you could say that U2, Coldplay, and Nickelback ‘totally suck’, buzzband utilitarianism would tell you that you are a stuckup a-hole who needs to think about other people’s needs and sensibilities.

Indie artists are different because they usually look to service a hyper-critical niche of people, satisfying artistic expectations above everything else. We’ve been making such a big deal about ‘indie going mainstream’ for the past decade because we now must evaluate some of our favorite branded ‘indie bands’ through the eyes of a buzzband utilitarian.

Feist’s 2007 album The Reminder was a massive success and one of the first notable albums from the ‘OMG indie is going mainstream and this band embodies everything that is right with music’ stable of artists. She fulfilled an expectation that we have had for all independent-looking and -sounding female artists to write something that resonated ubiquitously enough to go mainstream while still retaining its initial charm. It all started when Lisa Loeb wrote the perfect song “Stay” when ‘indie’ used to be called ‘singer-songwriter.’ We’ve seen numerous female artists struggle with the emotional expectations of being the Great Female Indie Hope, most notably represented in the meltdown of Cat Power.

We hoped that one woman would write an album that could be strong enough for a feminist with armpit hair, but also tenderly catchy enough for a sorority girl’s post-workout cooldown mix. Also, it couldn’t be naggy and talk about how men are terrible the whole time over boring piano-playing. It made sense that an ‘indie’ woman would eventually hit the perfect feminine aesthetic that appealed to all types of women without being ‘too girly’ for a man to enjoy. Feist nailed it on The Reminder.

There’s nothing very compelling about Feist’s new album, Metals. There really isn’t a hint of the poppiness that made Feist successful. Upon first listen, the standard fan searches for songs that ‘remind you of The Reminder.’ It sounds like there is something blatantly underwhelming about the new album, as if that was a strategic decision to distance herself the sound (and success) of her breakthrough album. Like she already knows that she can hit a sweet spot between artistic credibility and commodified female-to-female marketability. Metals isn’t made to introduce new people to her brand — it’s for people who already like Feist enough to go on an artistic journey with her. She’s already internationally known as ‘that girl with cute bangs whose MP3s you downloaded’, fulfilling her duties as an era’s heartwarming utilitarian artist.

But maybe she made the right decision, because she’s already pleased a helluva lot of people. When an artist has ‘already gone mainstream,’ they create redefined and very personal expectations for success. Artists either seem to be tired of themselves and the ‘success’ that they once theoretically wanted, or they just want a new personal challenge now that they know what ‘pleasing everyone’ feels like. The storyline is a pretty good red herring to distract critics and fans from ‘being let down’ because we can just celebrate and reflect on the historical legacy of the artist, which might be somewhat deserved in Feist’s case.

In a recent interview with Pitchfork, Feist openly talked about the warped existence of the smash hit song “1234”:

“1234” started to speak on its own behalf. You know when you stare at the sun and then you look at something and you can’t see anything because your retina’s been burned out a bit? There was an external retina burning that happened with “1234”, and it didn’t really speak to the reality. It also cut a lot of tethers to the past that were really relevant to me. It was really double-edged. I had no motivation in me to try to get back to that place. So I needed to make sure that there wasn’t a song on this album that that could happen with.

So maybe Feist lost touch with herself and went into hiding on a rural farm living a ‘normal life.’ Good for her. She constructed an album that she is proud of on her own terms. That’s nice. She lowered expectations, might not sell as many albums, and probably won’t have to tour as hard. Her existence won’t warp into the life of a ‘famous person’ because she already went on that ride and she got tired of it. Totally understandable, especially now that we have ‘humanized’ famous people in the Twitter era.

But it’s not just her choice to ‘get artsy fartsy’ and purposely avoid writing another “1234.” As a society, we have also sort of moved on from some of the most marketable aspects of Feist. Her rise to fame coincided with some important trends in ‘branding’ the indie experience for mainstream markets. First of all, she was ‘Canadian.’ Remember when all of the freshest indie music was being created in Canada? Back before 2008, I would rather have been from Canada than Brooklyn.

Additionally, technology as it relates to music discovery and storage is no longer a big deal. Feist’s appearance in the most famous Apple commercial ever made her a logical tie-in to the digital music explosion. No one really thinks iPods are ‘fresh’ any more and we’re more likely to make fun of a band that appeared on an Apple commercial than praise them for their trendiness. For a brief time, iTunes was perceived as a ‘revolutionary music store that leveled the playing field for artists to instantly reach consumers’ instead of just being perceived as the latest iteration of a retailer that takes too much from artists and labels.

Most artists adapt to changing times, creating new storylines to fuel an album cycle. The Reminder afforded us the opportunity to reflect on emerging opportunities for ‘up and coming indie artists’ getting more exposure than ever. For Metals, Feist’s storyline is about deciding not to pursue mainstream success. She made the album she wanted to make. She’s no longer ‘that girl who was Peaches’ roommate.’ Or ‘the girl from the iPod commercial.’ She’s more than just ‘the indie girl with bangs and a whimsical music video who seemed refreshing in a very VH1 context.’

She decided to write a nice, little album for herself instead of trying to take down the international slutwave movement where Lady Gaga, Katy Perry, and Ke$ha became the most downloaded, most popular artists. A buzzband utilitarian would be at peace with the popular music universe, no matter the outcome and results. Why question the formula that the most successful artists use to become the most popular acts in the world? Trust in the ears of the masses and the artists and marketing teams who function as aesthetic visionaries.

We raised the bar for Feist because she deserved it. After you’ve recorded an album that can be enjoyed by large markets, it’s hard to avoid letting them down. The ambition behind Feist’s Metals might be noble and well-intentioned, but her artistic motivations don’t really free her from the image she’s trying to shed. Feist is still defined by The Reminder.