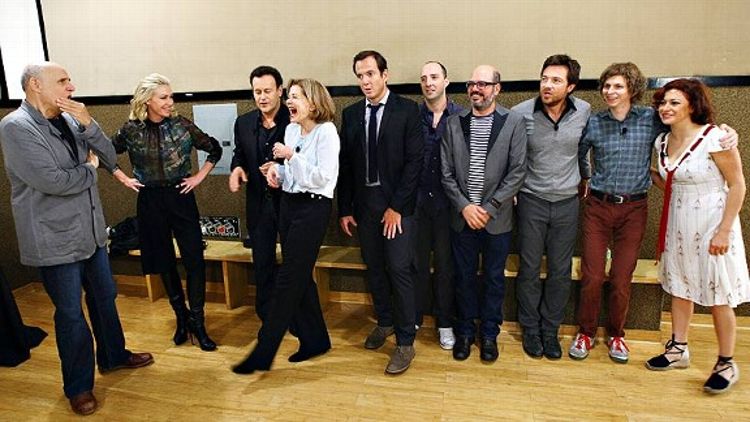 Where were you when you heard the news that brought a generation of Motherboys out chicken dancing into the street? On a Segway perhaps? Or just chilling at the Banana Stand? Did it make your eyebrows raise or fall off entirely, a la Stan Sitwell? Yes, it was just 48 hours ago that Arrested Development creator Mitch Hurwitz, flanked by the cast, declared live from the stage of the New Yorker Festival his intention to make a “limited-run” fourth season of the culty sitcom leading into the long-awaited feature film in the summer of 2013. The subsequent elation amongst a certain class of UCB-chronicling comedy nerds was palpable — a joy almost matched by Michael Cera’s agent and the guy renovating Hurwitz’s pool house. More Arrested Development means all is right with the world, an ancient (by Internet standards) wrong will be righted, a huge mistake of Gob-ian proportions will finally be undone.

Well, Maeby. Far be it from me to greet happiness with a dismissive “her,” but I’m not entirely sure we want this as much as we think we do. Beloved favorites often become beloved precisely because of their absence; at a certain point fandom of a dearly-departed cult hit becomes as much of a self-identifying badge of noteworthiness as it is actual cultural enjoyment. Arrested Development was inarguably great, an avalanche of gags, triple-entendres and frustrated jokewriter bile that achieved a sort of ecstatic anarchy of hilarity. Still, just because we adored something doesn’t mean we need more of it. Arrested Development wasn’t a poor, unloved bastard like Steve Holt — it won multiple Emmys, launched Jason Bateman’s movie career, and tricked Hollywood into giving Michael Cera one. Arrested Development got multiple chances and three full seasons on Fox, a network that’s usually about as charitable as Lucille Bluth after her fourth gimlet. There is nothing particularly unfair about the way the show ended — nor about the way affection for it has only grown via word of mouth, DVD, and ridiculous .gifs since it went off the air. This need to have more of everything — that we somehow deserve it and that what we had (106 20 hours in total!) was somehow insufficient to our ravenous need for puns — seems both a peculiar affectation of the Internet age and exactly the sort of entitled greed that got George Bluth in trouble in the first place.

Furthermore, who’s to say it will be any good? Almost from the moment AD was put to sea on its exploded yacht in February 2006 (via a Friday night burnoff of the final four episodes scheduled against the Winter Olympics; OK, maybe that was a touch unfair) there was talk of bringing it back. First Mitch Hurwitz had a deal to resurrect the show on Showtime only to bail at the last minute. Then hope lived on via a half-decade of softballs lobbed at castmembers during interviews. “When will there be an Arrested Development movie?” as if a big-screen version of a show that couldn’t manage to draw more viewers than American Dreams would be a sound box-office investment. Instead of revisiting the Bluths, Hurwitz spent the last two years staging a quasi-reunion via Fox’s Running Wilde, a sitcom starring Will Arnett and David Cross so terrible that not even the most blinkered Bananagrabber could possibly defend it.

Now the stakes are no lower but the stars are in alignment — or, in Cera’s unfortunate case, in decline — and all systems appear to be go. Five years ago, Hurwitz begged off future Arrested Development development by saying he was “worried about letting down the fans in terms of the quality of the show dropping.” Those worries appear to have been assuaged by time and the presumably sizable checks being dangled in front of him by content-hungry outlets Showtime and Netflix like so many human hands in front of ravenous, bow-tie wearing seals. As much as I’d like to swallow the teamocil with the rest of the fanbase, these lingering doubts remain. Arrested Development succeeded because there was no lesson-learning, no hugging, and certainly no touching. Reunions are predicated on winking familiarity and a need to please the pre-existing audience, not challenge them. It’s much easier to laugh and joke around on Twitter than it is in the multiplex. If Arrested Development comes back and disappoints it will leave a hell of a lot of people blue — and not in the fun, sexy Tobias way either.

Metals and Feist's Escape From the Mainstream