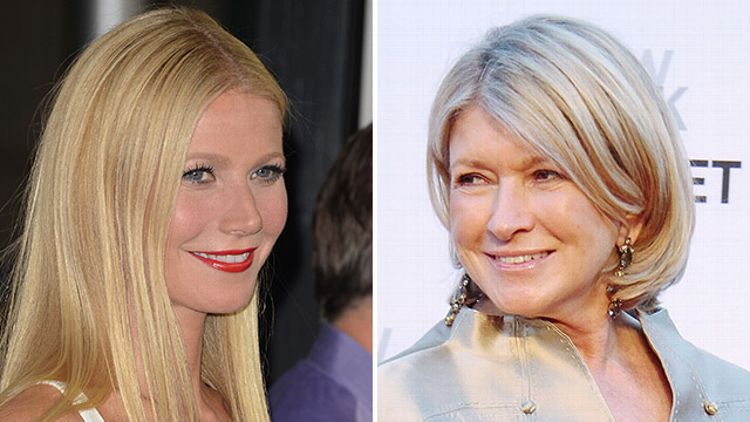 Do you feel that icy wind blowing in, turning the leaves as it scatters them on the perishing autumn grass? That’s the sensation of being subtly frozen out by Martha Stewart, as Gwyneth Paltrow now knows. Nothing extinguishes the fire in your personal outdoor pizza oven/cult of personality like the realization that your heroes might not respect you back. Martha also doesn’t think bloggers are experts, because most of them are not “trained editors” and their recipes aren’t always tested. I guess she doesn’t know that everyone does their apprenticeship training and builds their careers on the Internet now? Like, if the next Martha Stewart came up tomorrow, she’d definitely be a blogger, because there is no other alternative for building that kind of career. Lots of bloggers are amateurs, but so is everyone until somebody gives them a platform. Unless you’re Gwyneth Paltrow, and then you use your clout and fame to give yourself a platform, knowing that it doesn’t matter if your business fails because you have the money to afford it. For Gwyneth, lifestyle branding is just a lark. Gwyneth is merely a dabbler. Martha is a professional. Gwyneth does this shit on the weekends. Martha is in the lifestyle game 4 LIFE.

Martha has a new book coming out about aging called Living the Good Long Life, and earlier this year she told Today about signing up for Match.com. “I’d like to have breakfast with somebody,” Stewart told Matt Lauer with the same casual attitude she brings to preserving herbs. “I’d like to go to bed with somebody. Sleep with somebody.” Who can hook up a hot 71-year-old multimillionaire with a decent-hearted trophy boyfriend? You know that’s probably a pretty fun life to ride shotgun on. Don’t let the control-freak façade fool you for a second; I’d bet you dollars to pumpkin doughnut muffins that Martha gets dowwwwwwwn.

Martha doesn’t actually slam Gwyneth in her interview with Bloomberg. She just throws shade. Delicious, confectioners’ sugar–dusted shade, sifted through a stencil onto a fruit cobbler with the chocolate inscription “You’ll Never Be Me, Bitch!” Here’s Martha “I Started This Gangsta Shit And This The Motherfuckin’ Thanks I Get” Stewart explaining why Gywneth’s attempts at artisanal homemaking for very rich ladies just doesn’t measure up to the O.G. diva’s expertise.

This is some Regina George–level, passive-aggressive, alpha-girl technique. You can’t point to any particular thing Stewart says as mean. She’s actually being very nice and complimentary. There’s just an undercurrent of superiority, a slight condescension to Gwyneth’s aspirations to the lifestyle throne Stewart still occupies and has no plans to vacate anytime soon. I’m sure Gwyneth grew up fantasizing about the Martha Stewart lifestyle, just like any wealthy, carefree white girl from Santa Monica. Given a choice between pies made by Martha or Gwyneth, everyone’s going to go Martha. Gwyneth’s will be some ugly gluten-free mess made out of bramble berries and sediment, and Martha’s will taste incredible.

But why even bother with the shade, given the Martha Stewart brand’s global success? Is Martha threatened by Gwyneth’s Goop empire, which, along with Pinterest, has democratized the sort of information that once could have been found exclusively in print magazines like, say, Martha Stewart Living? It might just be a fun way of venting anger about her home goods love triangle with Macy’s and JCPenney, which recently ended in court. Martha’s line of products is more affordable than most anything on the Goop website, which sells hundred-dollar plain white tees with the cavalier attitude about money that only the landed gentry possess. Gwyneth’s lifestyle vision is aspirational. Martha’s, although expensive and time-consuming, is in many ways much more practical. Don’t worry, Martha. Your rep is safe for now from Gwyneth, Lauren Conrad, and all the other pretenders to the WASPy design throne. No new end tables.