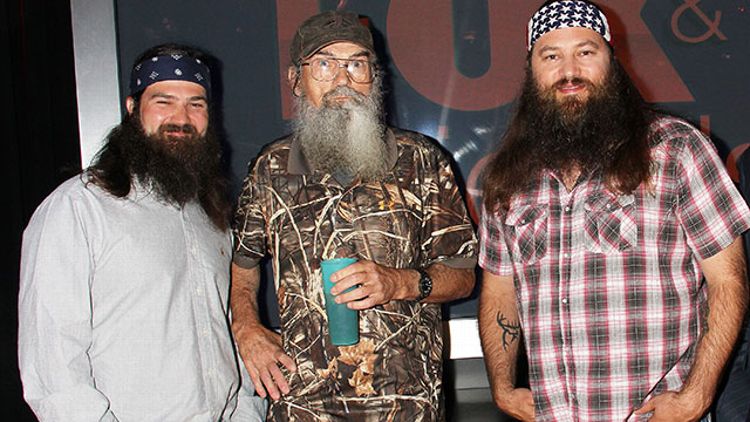 It looks like we’ve got an ol’-fashioned TV network vs. duck call–making family turned reality-star family standoff on our hands. A quick catch-up: Duck Dynasty’s Phil Robertson made some way-over-the-line homophobic remarks in GQ (“[a woman’s vagina has] more to offer. I mean, come on, dudes! You know what I’m saying? But hey, sin: It’s not logical, my man. It’s just not logical”), and A&E put the 67-year-old Louisiana native on indefinite suspension from future filming. Now the Robertson family strikes back.

“The family has spent much time in prayer since learning of A&E’s decision,” reads a statement at the Duck Commander website. “We want you to know that first and foremost we are a family rooted in our faith in God and our belief that the Bible is His word. While some of Phil’s unfiltered comments to the reporter were coarse, his beliefs are grounded in the teachings of the Bible. Phil is a Godly man who follows what the Bible says are the greatest commandments: ‘Love the Lord your God with all your heart’ and ‘Love your neighbor as yourself.’ Phil would never incite or encourage hate.”

Lemme stop you right there, Statement. Phil incited and encouraged a brand of thinking that, regardless of the name you want to hang on it, isn’t as far from “hate” as you’d like to believe. Robertson’s remarks, taken in full, feature a lot of specific, personal worldviews (basically, “sex between men is ickyyyy!”) being flown under the banner of Christian faith and/or absolute truths. This wasn’t just an expression of faith — it was an expression of opinion that’s now further stigmatizing an enormous group of people who don’t deserve this shit from a guy who’s suddenly reality-TV-famous.

Speaking of which, know what hasn’t gotten enough media time? This bit from the same GQ article, from the mouth of the same neighbor-lover who suddenly feels like he’s being misrepresented as some kind of meanie: “I never, with my eyes, saw the mistreatment of any black person. Not once. Where we lived was all farmers. The blacks worked for the farmers. I hoed cotton with them. I’m with the blacks, because we’re white trash. We’re going across the field … They’re singing and happy. I never heard one of them, one black person, say, ‘I tell you what: These doggone white people’ — not a word! — Pre-entitlement, pre-welfare, you say: Were they happy? They were godly; they were happy; no one was singing the blues.”

Philllll. Phil! I mean … are you … have you … ah, let’s just get back to the statement. “We are disappointed that Phil has been placed on hiatus for expressing his faith, which is his constitutionally protected right. We have had a successful working relationship with A&E but, as a family, we cannot imagine the show going forward without our patriarch at the helm. We are in discussions with A&E to see what that means for the future of Duck Dynasty. Again, thank you for your continued support of our family.”

The “cannot imagine the show going forward without our patriarch at the helm” part could be a wave-maker. Season 4 premiered to nearly 12 million viewers, making Duck Dynasty a reality-TV Walking Dead, essentially. Season 4 will premiere on Jan. 15 and has largely finished filming. For now, pray to whoever/whatever you pray to that the whole thing isn’t “resolved” by a limp non-apology. (Like the one Robertson already issued.)