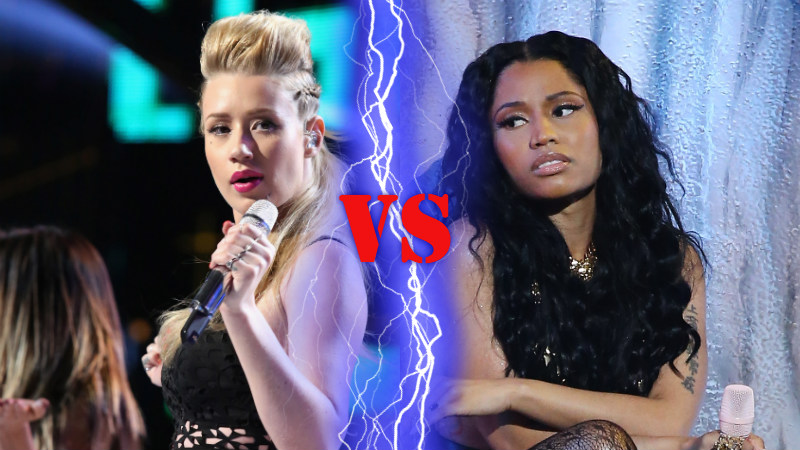 Round 1: In July 2010, a not yet world-famous Iggy Azalea tweeted, “lmao at nikki saying she did the bet awards live. errrrr. if you say so girl.” Azalea, a then-20-year-girl from Mullumbimby, New South Wales, Australia, was living in Los Angeles, trying to get her rap career off the ground, having done brief tours of duty in the rap capitals of Miami, Houston, and Atlanta. Iggy was a relative nobody, taking shots on Twitter at rap’s latest reigning champion, its biggest female megastar in forever.

In 2010, Nicki was promoting Pink Friday, her first studio album, which would eventually go platinum. The first official single, “Your Love,” went to no. 14 on the Billboard Hot 100 chart. By the end of 2010, Nicki had set a record by appearing on seven singles charting on the Hot 100 at once. None of them went to no. 1, though, her own “Super Bass” peaking at no. 3. At the end of the year, Nicki was riding the success of “Moment 4 Life,” her duet with Drake.

Round 2: In 2011, Iggy put out a mixtape called Ignorant Art whose lead video, “PU$$Y,” garnered her a lot of Internet music media coverage and led to her eventually signing with Interscope. It’s no coincidence it was a video that set off Iggy’s career — much of her appeal stems from the fact that she raps in a voice influenced by black Southern female rappers but is a pretty blonde white girl herself. In 2011, Nicki was now one of the biggest stars in the world in any genre. She was the musical guest on Saturday Night Live; Pink Friday went to no. 1 on the Billboard 200 albums chart. She opened for Britney Spears on Britney’s Femme Fatale Tour and then had a huge hit from Pink Friday with “Super Bass,” which went platinum eight times over and sold four million copies. Minaj was newly in command of a personal empire and adjusting to her huge fame.

Round 3: Iggy signed again, this time with T.I.’s Grand Hustle Records. She had hoped to put out The New Classic in summer of 2012 but was still contracted to Interscope. The release date for The New Classic was repeatedly postponed, and whether it would come out at all became a running joke. More important, so did whether it would come out before Azealia Banks released her own heavily pushed-back debut. (It did. Banks’s album is now schedule for this summer.) Iggy was controversially featured on the XXL Top 10 Freshman List cover, alongside rappers like Danny Brown and French Montana. Banks in particular called out XXL for Iggy’s inclusion. In March 2012, Iggy and T.I. put out a song called “Murda Bizness,” intended to be the lead single for The New Classic. In July, still unable to release the album, Iggy put out an EP called Glory; she released a second mixtape, TrapGold, with Diplo and FKi, in October.

Meanwhile, Nicki was headlining the Pink Friday Tour, which later became the Pink Friday: Reloaded Tour, after she dropped second album Pink Friday: Roman Reloaded in April 2012. The album was not without its detractors; Minaj pulled out of Hot 97’s Summer Jam after a DJ criticized Roman’s smash EDM-styled single “Starships” as something other than “real hip-hop.” Lil Wayne and the rest of Young Money canceled their performance at the show as well, in solidarity. She eventually smoothed things over on-air with Funkmaster Flex. Nicki was more of a household name than ever, having performed at the Grammys and the Super Bowl halftime show with Madonna and M.I.A. At the end of 2012, Minaj signed on to join American Idol as a judge. She quickly became enmeshed in a feud with Mariah Carey that was decidedly real, although their sparring didn’t garner the viewers producers hoped it might. After they’d convincingly portrayed sisterhood in Mimi’s “Up Out My Face” video, it was depressing to see the two divas unable to get along. In 2013, Minaj was certified as the most-charted female rapper in the history of the Billboard Hot 100.

Round 4: The New Classic finally came out on Island Records. Its fourth single, “Fancy,” became a huge hit with the assistance of a viral Clueless homage music video, and The New Classic shot up the charts to become the highest-charting album by a female rapper since, well, Nicki Minaj’s Pink Friday: Roman Reloaded in 2012. “Fancy” hit no. 1 on the Billboard Hot 100 (where it still sits after five weeks), and a guest verse on Ariana Grande’s summer hit “Problem” made Azalea the first act to simultaneously have a no. 1 and a no. 2 hit single since the Beatles. Iggy gave an interview where she ruminated on her new fame and claimed she’d “rather be the Stones.” On “Fancy,” the guttural beat by the Invisibles and catchy chorus from zeitgeisty pop genius Charli XCX prop up Iggy’s lazy rapping about how she “can’t shop at no department” and how much she enjoys having nice clothes, physical beauty, and lots of money.

Meanwhile, “Pills N Potions” the lead single from Nicki’s forthcoming third album, The Pink Print, peaked at 24 on the Billboard Hot 100. The song and video showcase the softer side of Nicki, and Minaj has given up her famous candy-colored wigs and bright, heavy makeup in favor of a more natural look. After she’d dropped the hard-as-nails buzz single “Lookin Ass” and ball-death-drop “Yasss Bish,” fans were anticipating more of the hard-flowing Nicki of her mixtape era, only to be greeted with an Auto-Tuned love song about substance abuse.

This weekend at the BET Awards, Nicki accepted her fifth consecutive win in the Best Female Hip-Hop Artist category with a speech that many saw as shade directed at Iggy, who had performed with T.I. earlier in the night in a medley of his song “No Mediocre” and her “Fancy.” Nicki was seen bopping to “Fancy” in the audience in a reaction shot, and she didn’t ever actually say Iggy’s name, but most people interpreted her emphasis on the importance of “authenticity” as a statement against Azalea’s Miley-like cherry-picking of black culture.

Verdict: Nicki’s not wrong, but firing shots at Iggy makes her look insecure. Feuding doesn’t usually make either person in the feud come off very well, and, as with her beef with Mariah, you have to wonder what Nicki’s so worried about. Nicki is clearly a billion times more talented than Iggy, but while she may have once bragged “Competition? Why, yes, I would love some,” I’m not sure she actually would — particularly from someone who looks like an actual Barbie doll, is also dominating the pop-rap crossover spot, and is arguably coasting on the novelty of being a hot white girl with a big ass who can believably imitate the rap styles of better artists.

Nicki always comes off as defensive in her beefs, whether she’s disrespecting legends like Lil’ Kim and Mariah or side-eyeing juniors like Iggy. Nicki probably resents how “Fancy” broke records she herself hoped to break, and that Iggy’s promo cycle is interrupting the fabulous rollout of The Pink Print. Nicki doesn’t want to fight Iggy because of the chance she’ll lose. And she hasn’t exactly made a habit of championing other female rappers. You get the feeling she prefers having the lane all to herself. There’s a horrible tendency to pit women against one another at the exclusion of all the men in that field, most of whom Nicki is easily better than, too.

If Iggy were the Eminem of Australian rappers, it would be one thing, but she’s not. There’s a storied tradition in music of white musicians imitating black vocal affectations and appropriating black sounds to great commercial success — the Rolling Stones and the blues, the Police and reggae, Paul Simon and South African music. That’s not to let Iggy off the hook, just to say that she’s part of a long tradition of repackaging black music through white avatars and making a shitload of money doing it. Still, the repackaging doesn’t have to be devoid of character: Indie white female rappers Kitty (formerly Kitty Pryde) and Die Antwoord’s Yolandi Visser have unique styles that feel original, not photocopied from other flows. I know more about Fergie from her five lines in “All of the Lights” than about Iggy from every Iggy Azalea song that exists.

Iggy raps, but she never says anything. It’s embarrassing of T.I. to put Iggy on a song called “No Mediocre,” because she is the definition of mediocrity. Nicki may currently be the most high-profile figure even attempting to acknowledge that if Iggy were not an attractive young white female, there is no way she would be in this position. Hopefully, Nicki will use her frustration to fuel studio time and not just to lash out further at Iggy, who at this point could still be a one-and-a-half-hit wonder. Case in point: Iggy’s new single “Black Widow,” which features Rita Ora singing a hook cowritten by Katy Perry, is a billion times worse than “Fancy.” Maybe it will tank, and Nicki will feel charitable and put Iggy on a feature. They could do a video based off The Craft or something.

In terms of supporting female rappers and sisterhood and witch-rap, go buy Gangsta Boo & La Chat’s album Witch. The two Memphis rap legends made a whole album about being two bad bitches on the same damn team, with amazing song titles like “Can’t Sit With Us,” and “Thelma & Louise.” You should taste that.