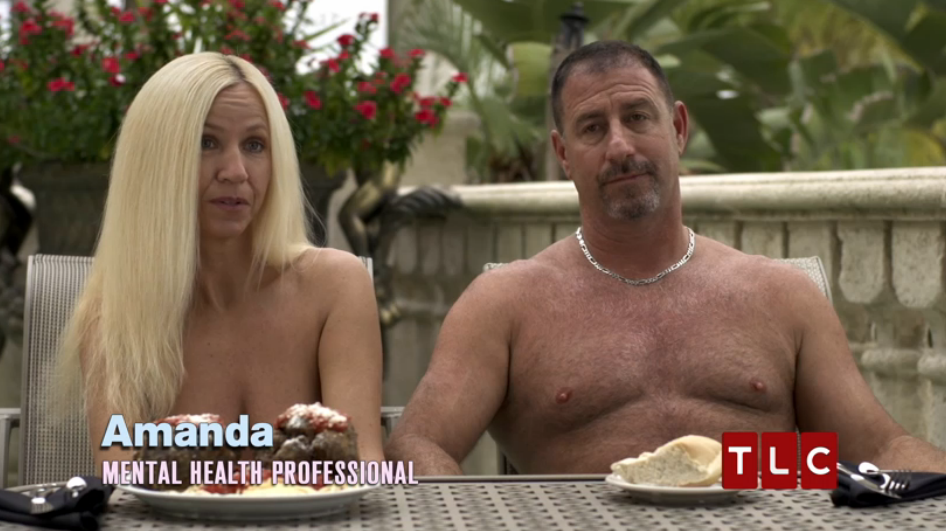 Who Is This Now? Paulie.

Why Are We Watching Him? He’s sought the assistance of specialty real estate agent Jackie Youngblood in his search for a new home.

How Did He Get Here? Paulie is a nudist, so he’s considering homes in a Florida nudist community — which is Jackie’s particular area of expertise. Not just because she knows the market well but because … she is a nudist herself.

What’s the Grossest Thing We See? It’s a tie: either Paulie’s screams of pain when a local artist taking a cast of Paulie’s torso tries to remove it, taking a lot of body hair with it; or when a nude Paulie demonstrates his favored method of bidet use. Seriously, we see him sit down on it facing the taps and lift his legs up to demonstrate to his realtor exactly how he likes to get in there to clean the area.

What Have We Learned? Nudists think they are HILARIOUS.

Who Is This Now? Nev.

Why Are We Watching Him? He’s supposedly trying to help a couple who’ve been “dating” online for years meet in person; in actuality, of course, he’s embarrassing awkward young people for the sake of his dumb TV show.

How Did He Get Here? Nev was tricked by a sad married mother pretending to be a sexy young dancer, and after making a documentary about his ordeal, he parlayed his notoriety into this series.

What’s the Grossest Thing We See? Miranda, who had written to Nev for help meeting her online boyfriend, James, told him as part of their backstory that the person she now knew as James had previously presented himself as Cameryn, a totally different guy in a totally different city. So it should come as a shock to no one that James isn’t actually James at all; she’s a girl named Gabby. And when the truth comes out (as it were), even though she’s just told Nev that she’s only 18, and that her family is preventing her from meeting Miranda (presumably because they’re conservative, so Gabby’s situation might be precarious if she were to identify herself as a lesbian), Nev is SO PUSHY about trying to make her declare her sexual orientation, as if it’s any of his concern. Later, when Miranda reveals that she and Gabby are not just still talking but have been flirting, he could scarcely look more excited than if he’d actually seen them having sex.

What Have We Learned? Nev is a child, and like all children, has no business interfering in anyone’s romantic affairs.

Who Is This Now? Gretchen.

Why Are We Watching Her? She’s working on her relationship with her fiancé, Slade, in an in-patient couples counseling situation.

How Did She Get Here? She’s a Real Housewife of Orange County, which means there’s a segment of the population that’s interested in watching whatever she does, including this.

What’s the Grossest Thing We See? This week’s B.S. “exercise” involves the couples trading partners for a date night of dubious therapeutic value; Gretchen is paired with Kevin (husband to Traci Braxton of Braxton Family Values). First, she rejects the date that had been planned for her because she’d already committed to attend some kind of charity event. Then, when the boot camp directors allow her to go with Kevin, she makes him carry her coat and (giant) purse on the way to the car. Finally, when they arrive at the event, she makes him get out some distance from the red carpet so it won’t confuse anyone who sees the paparazzi photos to see her with someone other than Slade.

What Have We Learned? Gretchen thinks she’s a lot more interesting than the rest of us do.