Lupita Nyong’o Is ‘People’ Magazine’s Most Beautiful Person of the Year … and Yes, That Matters 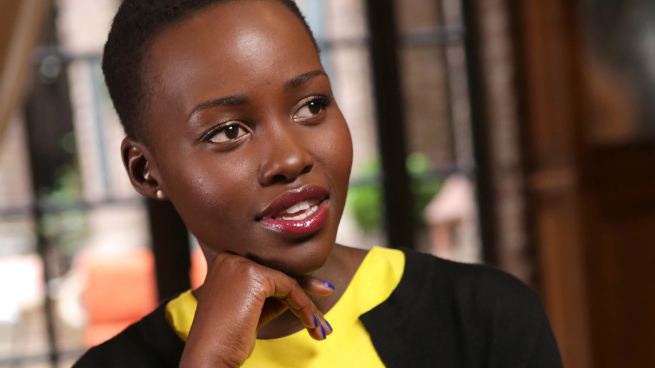 People magazine has been doing its “Most Beautiful People in the World” feature since 1990, as a sort of spinoff of its “Sexiest Man Alive” feature, which began in 1985. The issue is something even people who don’t read People might pick up, and it’s one of the magazine’s best-selling editions every year. It’s not really so much a by-the-book judgment of physical beauty as it is an extension of a common theme of People’s stories: Wouldn’t you love to be best friends with this nice celebrity? For 2014, People has chosen Lupita Nyong’o, hot off her Best Supporting Actress Oscar win for 12 Years a Slave, and now the fourth woman of color in 24 years to win the title of Most Beautiful.

The inaugural “Beautiful People” issue had Michelle Pfeiffer on the cover. It’s always a pretty random honor, since People is a celebrity magazine and generally puts whoever the editors think will sell well on a cover. (Celebrities’ agents are not not involved.) The “Most Beautiful People in the World” almost always happen to be actors and actresses. Cindy Crawford took the title in 1993, when she was the undisputed biggest supermodel alive, but that choice seems sensible for the era when supermodels became mainstream multimedia celebrities. Other than that, it’s been a parade of America’s Sweethearts through the ages: Meg Ryan (’94, duh), Courtney Cox (’95). They put men on the cover in ’96 (Mel Gibson), ’97 (Tom Cruise), and ’98 (Leonardo DiCaprio, also duh), before one assumes the editors realized they already had “Sexiest Man Alive” and should throw the “Beautiful” focus back to women. So they rebooted it by putting Pfeiffer on the cover again (’99), followed by Julia Roberts again (2000). Catherine Zeta-Jones (’01) and Nicole Kidman (’02) were the first non-American women to make the cover, and Halle Berry (’03) was the first minority cover star. Jennifer Aniston (’04) was followed by Roberts (again! ’05), Angelina Jolie (sure, ’06), Drew Barrymore (’07), Kate Hudson (’08), and Christina Applegate (’09, the Samantha Who? years). Then in 2010 it was Julia Roberts (AGAIN!), before Jennifer Lopez (’11) and Beyoncé Knowles (’12) became the second and third women of color to grace the front cover and take the “Most Beautiful” crown. Last year it was Gwyneth Paltrow.

The fashion and beauty world’s immediate embrace of Nyong’o has been seen as an indicator of social progress in the world of fashion magazines. Fashion has championed a handful of black models over the years, but the catwalk landscape has remained predominantly white and reports of behind-the-scenes racism still run rampant. In a speech at the Black Women in Hollywood event thrown by Essence magazine, Nyong’o cited Alek Wek, the South Sudanese British model who became a supermodel in the mid-’90s, as an influence on her self-image: “When I saw Alek I inadvertently saw a reflection of myself that I could not deny. Now, I had a spring in my step because I felt more seen, more appreciated by the far away gatekeepers of beauty.”

She also described praying for lighter skin as a child, experiencing “self-hate” as a teenage girl, and finding no comfort in being told she was pretty by her mom. She describes her powerful first encounters with Wek’s image in the mass media: “A celebrated model, she was dark as night, she was on all of the runways and in every magazine and everyone was talking about how beautiful she was. Even Oprah called her beautiful and that made it a fact. I couldn’t believe that people were embracing a woman who looked so much like me as beautiful. My complexion had always been an obstacle to overcome, and all of a sudden Oprah was telling me it wasn’t.”

Nyong’o, who is now also the new face of Lancôme, seemingly understands the power of these mass-media images, particularly for children who are looking for confirmation that they might be beautiful too. Such images tend to reinforce outdated social norms and focus on making readers feel bad about themselves for what they don’t have (money, beauty, objects), rather than good. But they don’t have to! One of the most important tenets of Oprah’s empire is that you don’t have to sell women self-hate to make a profit. You can sell them self-love instead.

The gatekeepers of beauty are fickle and cruel, and I’m not even sure who they really are, anyway (seriously, who votes on the People “Most Beautiful” list?), but for complicated reasons they are still important. Mainstream fashion and celebrity magazines promote airbrushed, unattainable ideals of immovably faced perfection, but it’s important to keep broadening those ideals to better reflect reality, which is multicultural and features millions of different types of beauty. The question of who gets the cover still matters. Even Anna Wintour’s Vogue seems to have relaxed on the monotone beauty fascism lately. Lena Dunham and Kim Kardashian are nontraditional Vogue cover girls in different ways, but both of their issues sold really well and disproved the conventional wisdom that the Vogue audience demands to see Blake Lively clones on the front every single month.

Nyong’o tells People she thought “light skin and flowing, straight hair” was the standard of beauty, but eventually came to embrace her own looks. She is insanely beautiful, but her air of confidence definitely contributes to her radiance. She is excited to be on the “Most Beautiful” cover because of “all the girls who would see me … and feel a little more seen.”

A Very Serious Conversation With Kip Winger About Being Taken Seriously, Prog-Rock, and Metallica's Scorn