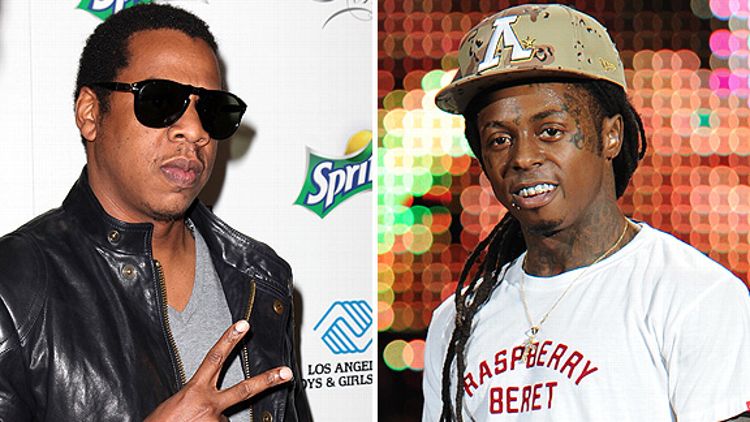 Lil Wayne’s Tha Carter IV leaked last night. It’s his first album since his prison stint, and his first proper album since 2008’s Tha Carter III (in between came the rushed I Am Not a Human Being and his much-maligned alt-rock side project, Rebirth) — and, therefore, it’s a big deal. The album will get an official release on iTunes at midnight on Sunday after Wayne’s performing at the VMAs, but way before then consensus will have formed as to whether or not he delivered on the hype. Right now, though, all anyone wants to talk about is his Jay-Z dis.

Let’s back up. Way back in January, Jay-Z and Kanye West dropped “H.A.M.” and sparked rumors of beef. The line in question was Jay’s, “I’m like really half a billion nigga, really you got baby money / Keep it real with niggas, niggas ain’t got my lady’s money.” To some it looked like Jay was harmlessly poking his competition by explaining their bank accounts are so piddling that they’re practically in line with those of newborn humans, and easily dwarfed by the riches accumulated by his chick, Beyoncé. But to those looking for trouble, Jay was possibly referencing Baby, a.k.a. Birdman, the hip-hop entrepreneur Wayne considers a surrogate father. As Forbes keeps reminding us, Jay-Z does indeed have more money than Baby, and therefore this boast would be accurate, if a bit dickish. On new track “Its Good,” Wayne responds, taking a veiled shot: “Talkin ’bout baby money? I got your baby money / Kidnap your bitch, get that ‘how much you love your lady’ money.” To clarify: Lil Wayne is threatening to kidnap Beyonce for ransom money. Well then!

The sad thing, though, is that we’re probably never going to get a response from Jay-Z. Since patching things up with Nas in 2005, Jay has barely bothered to engage with other beefing rappers. Pretty much the only exception: When Jim Jones (peeved at some label politics from when Jay-Z was running Def Jam) went at him, Jay mostly shrugged it off, explaining to Funkmaster Flex that Jones was “like the ninth guy off the bench just shouting ‘You a bum’ to the superstar on court putting up 50 every night.” Then he released a response track — the mostly forgotten “Brooklyn.”

Jay’s highly effective approach these past few years has been one of total calm. A former associate, Peedi Crakk, put out an entire Jay-Z-targeting album called Camel Face Hunting Season, and never heard back. Jim Jones’ buddy Cam’ron had a few sharp words as well, but he never got a dis song. Game has been trying to get a rise out of Jay for years, almost to the point of obsession. (He recently explained that Hova shrugged him off early in his career, and it still smarts.) The closest Game has come to hearing back was a brush-off on Blueprint 3’s “What We Talking About”: “I ain’t talkin’ bout gossip / I ain’t talkin’ bout Game / I ain’t talkin bout Jimmy, I ain’t talkin’ bout Dame.” And yet Game soldiers on with more dis tracks, resolute in the face of silence.

But Game’s not even the most embarrassing case in the history of ignored Jay-Z attacks. You can take your pick on that: there was former Roc-A-Fella MC Beanie Sigel who took shots at his old boss, and MC Hammer, who tried to convince people Jay-Z worshiped the devil.

So, no, Wayne, Jay-Z will probably not be responding to your threat to kidnap Beyoncé. Don’t take it personally.