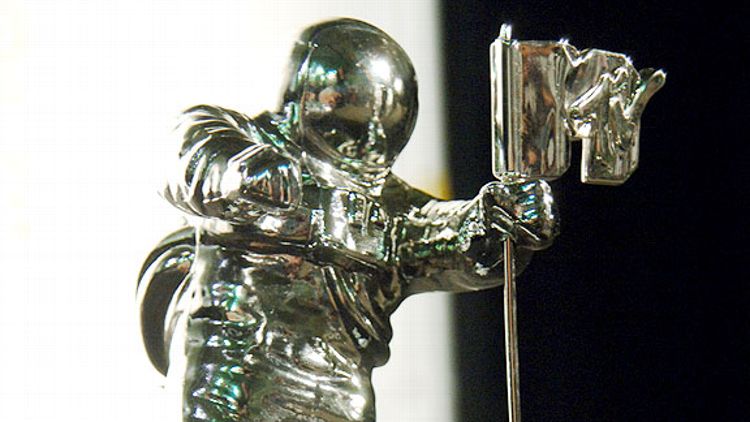 MTV may not air many videos anymore, but they do continue to air video award shows: The 2011 VMAs, the 28th iteration of the self-congratulatory celebration, will air this Sunday night. While ratings for the ceremony have ticked up in recent years, the anything-goes, carnivalesque excitement that once surrounded the event (“Put the tape in your VCR!”) has mostly wafted away in a haze of cheap Jersey Shore cologne and Twilight cameos. And on paper this year’s show promises a new low: desperate, cred-seeking nominations for bottom-of-the-buzz bin acts Tyler the Creator and Kreayshawn, a head-scratching outer-space theme seemingly dreamed up during a bad acid trip (“That idea of … transporting you on a journey through a space-time continuum of music” — put down the bong, Doug Herzog!). Most damning: the festivities will be without a host this year — and nothing is worse than a free-form party without someone there to pour the drinks and/or least make fun of the Jonas Brothers. (OK, scratch that. No host is actually better than a repeat of the Chelsea Handler racial follies from a year ago.)

But this is not a failure we will take lying down (wearing a wedding dress, writhing on the floor)! The VMAs have taught us so much over the years, from an appreciation for Michael Penn to when it was OK to laugh at Pee-Wee Herman again to when it wasn’t OK to laugh at Michael Jackson. And so, in the spirit of cooperation, we at Grantland unhumbly present a list of suggestions on how to fix the VMAs.

Kanye West is single-handedly responsible for the only interesting VMA moments from the past half-decade. Whether his spectacles were intentional or unfortunate, West is the only living artist actively committed to the insane idea that a Video Music Award show on MTV matters — and every year he can be counted on to do his part to make it so.

Our solutions to all of life's problems.
Since he’s all anyone talks about anyway, why not hand him the keys to the whole shebang? He’d most likely balk at “hosting” — there are watches to buy, after all — so the key would be pitching it as a curating gig. The man has impeccable, fascinating taste and an unimpeachable Rolodex: Imagine comedy from Aziz Ansari, off-the-wall collabos between Bon Iver and Pusha T, interstitials dreamed up by Vanessa Beecroft and Riccardo Tisci, and, that rarest of sights, a smiling Jay-Z. It would be over the top, potentially dangerous, and absolutely unmissable.

Make It a Battle Royale

MTV’s past decade has been dedicated to the idea that save for one night a year people don’t like watching music on television. The real story of television over the past decade, however, has been exactly the opposite: American Idol, The Voice, and Glee have seen to that. So why not make the VMAs MTV’s answer to those competitive blockbusters, the RJ Berger to the major networks’ Hung, if you will? Make every performance a head-to-head rumble in the ego-driven pop jungle: Lady Gaga vs. Katy Perry in a battle for flame-shooting brassiere supremacy, Beyoncé vs. Adele in an earnest belt-off, and 30 Seconds to Mars versus literally any other rock band in the world because, come on, right? Fans could vote in real time to determine the winner of a contest only an established, ego-soothing entity like MTV could pull off, all building to the battle-of-the-century rap-off between the two competing armrests of the Throne, Jay-Z and Kanye West. Provided, of course, it didn’t just devolve into a collegial debate over the Modigliani exhibit at MOMA.

Traditionally, the VMAs have been seated a lot like the Oscars — with various factions grouped together (rappers, rockers, Z-listers), their distance from the stage calculated by an obtuse metric involving fame, chances of winning, and willingness to smile when Russell Brand calls them gay. Why not take a page from the Golden Globe playbook and seat the celebs at tables piled high with free booze? And then grab another page — paper books are passé anyway — this time from Miss Manners and mix and match the nominees randomly? Only good things can come from a live television broadcast in which Adele gets drunk with Katy Perry, Tyler the Creator stares hate-daggers at Bruno Mars, and the Beastie Boys are forced to make small talk with Justin Bieber. Just imagine the laughs as Kanye goes out of his way to ignore the members of 30 Seconds to Mars that aren’t Jared Leto! (One additional note: Mumford & Sons will be seated alone at a table located just beyond Parking Lot C at the Nokia Center. Because not even a champagne buzz could make those dudes interesting.)

With a shrinking pool of famous musicians to choose from — the Foo Fighters are now officially the Meryl Streep of the VMAs — MTV has chosen to go all in on flashy pans, apparently using trending topics on Twitter as a nominating guide. Thus the usual suspects (Katy Perry, Eminem) are joined by the aforementioned Kreayshawn (who doesn’t have an album out), Tyler the Creator (who has a terrible one), and proud graduates of the throw-some-words-in-a-certain-order school of band-naming, Foster the People and Young the Giant. Chasing the notoriously fidgety Internet demographic is a risky choice, but probably the only one remaining for the show — but by announcing the nominees so far in advance (a month = a year in web time) we’re left with a roster that reads like the archive of a trendspotter’s Tumblr. Waiting until the absolute last minute to announce key categories would have allowed zeitgeistier sensations like Skrillex, the Weeknd, and Fall Creek Boys Choir to make the cut.

The nostalgic programming broadcast during MTV’s 30th anniversary earlier this month caused many a wise man to remark that “MTV Classic” should be its own channel — and we wholeheartedly agree. Rather than pursuing increasingly disinterested tweens with promises of Victoria Justice and Hunger Games spoilers, MTV should embrace its past and make the tepid “lifetime achievement” award a real, multifaceted thing. Instead of offering a tribute to Britney Spears (which is really happening!), the network could celebrate its rich history by celebrating, say, the grunge era (Cage the Elephant and Yuck perform alt-rock covers and/or their original songs — no one can tell the difference! Eddie Vedder plays his ukulele in a touching tribute to Alice in Chains’ Layne Staley! Dave Grohl and Courtney Love beat each other to death with royalty checks live on stage!) or ’90s hip-hop (the Game recites every Tupac song like Dave Chappelle imitates Samuel L. Jackson)! Puffy signs Biggie’s kids to onerous contracts! Busta Rhymes hosts a solemn memorial to Jeru the Damaja only to discover that Jeru isn’t actually dead!) The VMAs should gank the feeling of collaborative, random celebration that flourishes amongst the olds at the Rock and Roll Hall of Fame induction dinners — only with less Paul Shaffer.

If there aren’t any interesting videos for MTV to reward — and there aren’t, we checked — why not use some of the money that Pitbull was going to waste on his performance and fund old-fashioned videomaking instead? Set it up like a contest: Interesting artists and directors are paired off and given the same amount of time and cash to make a video that will premiere live at the ceremony. A winner is voted on by fans, and costs are recouped by selling the clips on iTunes at $1 a pop. Imagine Michel Gondry directing Nicki Minaj, Michael Mann hooked up with Rick Ross, and Ridley Scott directing whatever video he first directed 30 years ago.

In lean, narrative-free years past, MTV has attempted to play kingmaker by inviting less-than-almost-famous acts to the show: think the Hives and the Vines in 2002 or Florence and the Machine in 2010. Instead of wishing for stars to arrive fully-formed or casting at coolness (Jessie J is not a thing that is happening, America!), the network should go all in on the underground and use its bully pulpit to give shine to charismatically intense live performers like Fucked Up, Titus Andronicus, Japandroids, Yelawolf, and Meek Mill. Best case: new stars! Worst case: terrified parents. Win-win!

At this point, anything would be better than the same bicoastal two-step between Radio City and downtown L.A. Possible alternatives: the Condoleezza Rice wing at Muammar Gaddafi’s compound, that island in Dubai shaped like a Palm Tree, Simon Le Bon’s summer watering hole, Pittsburgh.