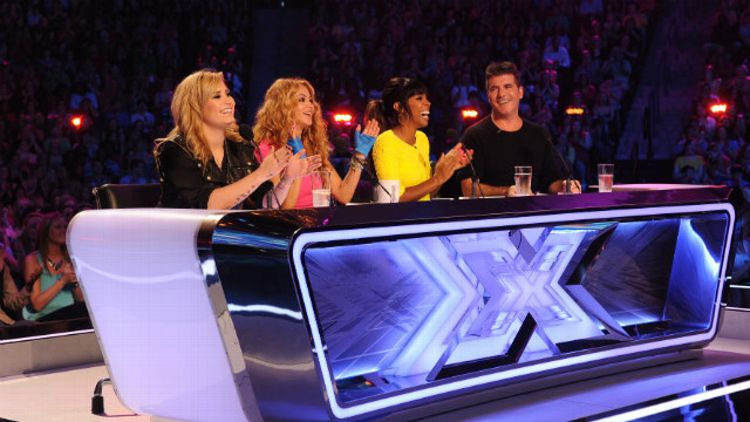 The first season of The X Factor arrived with wild-eyed ambitions. Boy-band fabricator and devourer of karaoke worlds Simon Cowell promised to extinguish American Idol’s Nielsen sun with a highly refined sonic death ray imported from his homeland. It did not work out that way.

The second season of The X Factor arrived with Britney Spears, and with renewed promises that hey, we’re serious here, this time we got it. Watch out, Idol. We’re coming for you, dawg. Maybe double-check the lock on the front door, we’ll waltz right in and rearrange your throw pillows. You don’t know what Britney is capable of, she really doesn’t like your pillows. The Earth spun on. Britney never even touched the pillows.

The third season of The X Factor arrived last night, with no discernible fanfare and much-diminished ambitions; we suppose that if you’d pressed your ear to the railroad track in the hours before its debut, you may have felt some gentle vibrations on your cheek as the wheezing locomotive somewhere in the distance sputtered its way toward you, dragging behind it several forgettable months’ worth of prime-time schedule filler. But you probably didn’t bother; it’s pretty hard to get excited for the reboot of the country’s third-most-popular televised singing competition. You’re over it; we’re all over it. Whither the spinny chairs? Not here. That’s the other one. That’s the one that a few people seem to care about, sort of, to the extent that people still care about such things.

But we watched it anyway. Old habits are hard to break. You never how deep Cowell’s V-neck will plunge, how many simultaneous colors Lovato can dye her hair, how many people are going to murder Adele songs. These aren’t good enough reasons to continue making this kind of poor viewing decision. But we’ve never had much respect for our time, so.

Let’s run through the premiere. This isn’t going to be a regular thing. But why not, for old time’s sake? OK, terrific.

Simon Cowell and Demi Lovato, the best thing about the previous season, are still around. But there are two new judges on the panel: Kelly Rowland of Destiny’s Child, and Paulina Rubio, of being famous everywhere but in the places where The X Factor’s ever-shrinking audience is measured. L.A. Reid is gone, drastically reducing the number of onscreen dick-measuring contests with Simon, robbing the show of its only real drama; you palpably felt the tension when the battling executives would flop ’em down on the judging table and throw handfuls of million-dollar bills at one another while America got out its play-along-at-home rulers. We miss L.A. Reid. But L.A. Reid has better things to do with his time, like literally anything else. We hope L.A. Reid is sitting at the Coffee Bean right now, thinking about rare birds or which Friday Bentley to drive tomorrow.

They’ve also restored the contestant teams to their first-season state: Girls, Boys, Groups, and Teetering on the Edge of the Musical Grave, Waiting for a Light Breeze to Deliver Them to Sweet Oblivion (Over 25s). There was a different arrangement for the coaches’ cohorts last season, which we’ve already forgotten. We think they were assigned to groups based on the likelihood they would sleep with a member of Emblem3. They changed that back to the Original Formula. Fantastic. Emblem3 weren’t available to put it in everybody this time.

There are also minor format changes we won’t see until later weeks. You don’t care. People will sing, people will judge them, people will tell you that you should be watching The Voice instead because Adam Levine and Christina Aguilera are going to bicker over a truck driver who flunked out of Idol nine years ago. The more things change, etc., etc.

Button-eyed hosting-muppet Mario Lopez still has the gig. (He killed Khloe Kardashian for tuning out of a 20-minute conversation about his new hair pomade made from koala essence and caramelized pioneer bones; anything you’re seeing on E! was shot years ago and cleverly edited to make it seem like she’s still alive. She’s not.)

Simon Cowell’s the same. Never change, Simon Cowell. We will follow you into the dark.

The feeling that the world’s most boring elf is sitting on your chest and lilting an off-key rendition of “Killing Me Softly” remains gloriously intact. (If you try to pick up the remote, he still sighs and makes a half-hearted attempt to slap it out of your hand. So you just sit there and let him finish. It’s easier that way.)

The premiere was only one hour! You can’t underestimate how important this is. This is like a hack in a Third World jail entering your rat-infested cell in the middle of the night and asking, “Only one bamboo shoot for the finger tonight, boss?” We would like to throw Rupert Murdoch a parade. These shows don’t need to be two hours.

In related news, the Season 13 premiere of American Idol will be 1 million hours long. They’re mixing things up over there, haven’t you heard?

“Worse” is, like, a really relative thing, you know? We’re all one year closer to death. That’s worse. We can probably all agree that we’d like to be one year further away from death instead.

This show still has contestants! And they sang. Let’s see a few of them.

First, you’re all, “Wow, these kids are annoying. And khakis onstage?” But then you’re all, “Wow, they are adorable. Take me to the snuggle room immediately, I need to spoon something right fucking now.” They’re like a She & Him who do it. You know they went home after the show and giggled and cried their way through some very mutually attentive lovemaking. She & Him don’t do it, right? Maybe they should rethink that. Look at what they could be if they put aside the guitars and harmonicas for a minute. They could make all the love.

If you were to watch the entire season — and we’re in no way suggesting that should or would happen — you will see no one better. Lillie McCloud almost tricks us into reinvesting. Almost.

If you’ve ever wanted to watch a karaoke DJ reenact the suicide scene from Rules of Attraction in front of four giggling judges, we’ve got the performance for you! Note: razor blades, bathtub not included.

Don’t watch Rion Page unless you want to cry. It’s not going to be the kind of crying Alex and Sierra do. It’s going to be the other kind. Let’s stop right here because those are enough feelings for one post.

Thank you for taking this brief journey with us. None of us are better for it, but at least we can write off that unwisely spent hour on our soul-tax returns.