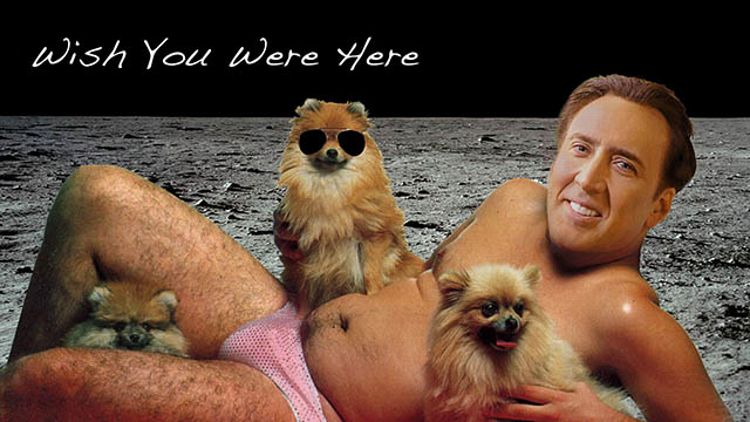 Nicolas Cage knows that he’s the man in the meme. In an interview with Moviefone following the Toronto International Film Festival screening of Joe, a David Gordon Green–directed drama in which Cage plays an ex-con who mentors a 15-year-old boy (played by Tye Sheridan), Cage addressed his virtual footprint, a FrankenCage crafted out of YouTube clips and blogs like Nic Cage as Everyone. Cage has previously stated that he doesn’t mind the Internet’s obsession with him, and reiterated to Moviefone that the coverage helps him stay “relevant with younger generations” who might otherwise have passed on ancient artifacts like Deadfall. Cage may be weird — he shops in excess, he loves comics so much that he named his son Kal-El and took the last name of Marvel figure Luke Cage to distance himself from his uncle Francis Coppola — but the eccentric celebrities who tried to outbid him on his dinosaur skull simply can’t compete in the meme arena. Cage, who doesn’t have a Facebook or website of his own, says that confronting his digital double is unavoidable, because people will send him links to Tumblrs featuring his face and “I’m like, ‘I don’t know! I don’t know why this is happening!'” A Cage and a twin, locked again in the claustrophobic embrace of a metafilm.

Cage knows the flavor of his presence onscreen is strong, bracing, and umami, and calls his method of acting “Nouveau Shamanic.” Roger Ebert was protective of Cage, praising him for his ability to be “daring and fearless in his choice of roles, and unafraid to crawl out on a limb, saw it off and remain suspended in air,” writing that he “always seems so earnest. However improbable his character, he never winks at the audience. He is committed to the character with every atom and plays him as if he were him.” He doesn’t discriminate, works hard, and respects even the bees (oh god, not the bees!), which has earned him the reputation of being simultaneously über-talented (Leaving Las Vegas, Wild at Heart, Honeymoon in Vegas) and hilariously alienating. His online fandom predates YouTube and consists of legends of men in leather jackets eating Fudgsicles, the actor desiring cake, and rage comics. Cage seems to be in the camp of people who adhere to the idea that you might do well to say yes to everything without reservation, just celebrating himself, being Miley.

This has resulted in the kind of fame that invites riffing and interpretation, like Christopher Walken’s, Samuel L. Jackson’s, and even Keanu Reeves’s, whose sad sandwich eating inspired a holiday. The subject’s acting quirks have to be immediately recognizable; their vocal tone and inflection are distinct enough for viewers to identify while blindfolded. They make career choices that seem out of step with their statuses: Walken in Puss in Boots and Jackson in Snakes on a Plane jump to mind as being real brain-thumping professional moves, but a lot of fun to watch nonetheless. It seems as though the actor is consciously engaging with the weird machine that picked him out of the Screen Actors Guild pool as an Internet icon, playing along with us even though they don’t know what exactly earned them their GIFs. Seeking out that kind of fame deliberately doesn’t work (I refuse to link to you, “Mass Text” by Tay Allyn) because it has to come from a place of earnestness, but it doesn’t seem to suffer from the actor using it for publicity. It’s a joke that comes out of nowhere and hugs its recipient while wet-willying him, leaving no scars (Cage the meme king is still taken seriously enough to earn early performance raves for Joe), delivering the blows gently and with affection, as if the attacker were wearing fuzzy mittens. In a community known for bullying or tearing down anyone or anything that crosses its path on a bad day, bestowing the meme honors on a celebrity acts like a form of reverence, a way to acknowledge style as symbol, something that stands up to mockery.

Ryan Gosling, another meme prince, once compared his fan-generated “Hey Girl” series to Fabio’s pigeon, in which scenario Gosling is Fabio and the web is the bird. It’s a story (and accompanying photo set) that belongs on the front page of some important chapter in the forthcoming Book of Internet, one that tells of a self-serious male supermodel who had been dive-bombed by a rogue avian creature while riding a roller coaster at Busch Gardens. Fabio may have said no to something at some point in his professional life, but it wasn’t soap operas, a role on a Suite Life of Zack & Cody spinoff, a series of margarine commercials, a women’s clothing line, Dude, Where’s My Car?, or a sax-heavy album. He was beaten up by a flying animal, and there he sat, his shirt unbuttoned just an extra notch or two, his blond mane wind-whipped like fake butter on vacation. It was the opposite of the salad lunches and beach strolls of the “Stars Are Just Like Us” column: No, this was nothing like us; this would have happened to nobody other than Fabio.

The meme is a powerful thing, conflating character and celebrity, dual-casting you as yourself in everything no matter what other role you choose to play. It captures the essence of the celebrity, a whiff of authenticity, a through line that just feels real, even if it isn’t. As Cage said, “Once something is written it becomes the mindset and the culture […] There really is nothing I can do about it but accept it.” Don’t ask how it got burned onto the world, just let it burn.