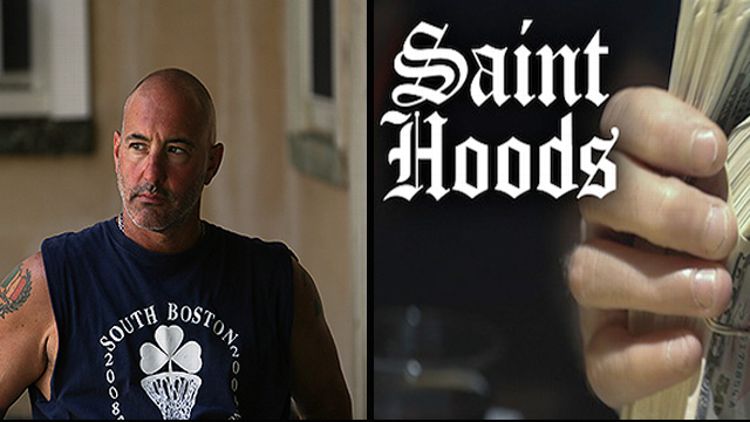 Just about this time two years back, James “Whitey” Bulger — the greatest gangster the city of Boston has ever produced — was arrested by the FBI. He was living in an apartment in Santa Monica, under the assumed name Charlie Gasko, with 30 guns, his girlfriend, and $822,000 in cash, mostly in $100 bills. And he hadn’t been seen in 16 years. “Everybody was shocked,” says Steven “Rocca” Costigliola, 50, a roofer, bookie, one-time Whitey underling, and newly minted reality TV personality. “Everybody thought he was dead, or hiding in Ireland somewhere. A lot of people thought the Feds never really wanted to catch him. That it’d be best if they didn’t.” We’re walking along the beach in Rocca’s native South Boston, and, technically, we’re not here to talk Whitey, but Saint Hoods, the Discovery Channel series that stars Rocca alongside a cast of colorful ex-cons (“Bear” Davis, The Tin Man) as they go about the business of bookmaking in the city of Boston. This being Southie and all, Whitey has a way of popping up.

On the show, rival crews run sports gambling operations while competing for territory. Delinquent customers are roughed up, TVs go flying through attic windows, silent threats are delivered through the cryptic ordering of whiskey shots. And if you have eyes and ears, I don’t need to tell you that it’s all made up. Discovery Channel blurs the line (a mild disclaimer warns only of “dramatizations”), but Rocca doesn’t bother pretending like it’s not scripted. “We’ll read it and go, ‘Shit, let’s talk about the time we did this and this,'” he explains. “Because sometimes, they try to get us to say stupid shit.” So, more or less: Discovery hired ex-cons to play themselves pretending to commit crimes, and those fake crimes may or may not be similar to real crimes they may or may not have, at one point, actually committed.

As the latest attempt to Jersey Shore–ify the reaahhal hawwdcooahh Bawwston (see: Wicked Single, Southie Rules), it’s uneven at best (the blatantly fabricated narratives, in particular, might make you wanna throw your own TV out an attic window). But Rocca — grizzled, fit, and possessor of one of the greatest rolling Boston accents you’ll ever hear — is a natural on camera. Driving around in a Cadillac yelling about the fuckin’ yuppies, he doesn’t have to do much to convince you he’d snap on a dude with the quickness.

I mention I could see a future in gangster movie character work, and he nods. “My father had me out of bed every day since I was 14 years old working my fucking balls off,” he says. “I would love nothing more than to finish off with an easy job.” Right now the show’s off the air: It premiered in the summer, then was pulled off the schedule. (Says the network: “Discovery is very excited about the show and will be announcing the time slot for all eight episodes of Saint Hoods in the very near future.”) Meanwhile, Rocca’s working part time with the Teamsters, which, unfortunately, as a convicted felon, is the best he can find. “My record has always come back to haunt me. This is the first time in my life that my record has helped me out.”

It’s one particular tick on that record that got him this gig: When Discovery found out he’d had dalliances with Whitey, its interest was piqued. It was the early ’90s, and Rocca was working with one of Whitey’s “top henchmen.” Whitey’s infamously cuddly relationship with the FBI is well-documented — it was his crooked FBI handler, back in ’95, that tipped Bulger off to flee Boston and an upcoming arrest — and it snared Rocca.

“Whitey had ratted out some people, one of them being the guy I was working with,” Rocca explains tersely. “I would call [on a wiretapped phone] and discuss business, booking, whatever. I got indicted on it.” He fought it until he ran out of money, then took a 17-month bid at the U.S. Penitentiary at Lewisburg, the same place Goodfellas subject Henry Hill did his stint. “Whitey’s a piece of shit rat liar, and a bully,” Rocca says now. Still, he looms large. We’d met outside the L Street Bathhouse and turned along the waterfront toward Castle Island. It’s the same stretch, Rocca pointed out, with a touch of melodrama, where Bulger used to take his walks: “Whitey made his presence known. He’d want you to see him, staring at you, pointing. Putting the fear in you.”

We loop back, taking in a bustling beachfront that, 20 years ago, was practically abandoned. The unlikely revitalization of Boston’s famous filthy harbor means that, today, Southie lifers are cashing out, selling newly desirable waterfront property for sums unimaginable when this was gangland, and moving up the North Shore. The Costigliolas have been in Southie since Rocca’s grandfather, a butcher, came over from Sicily; seeing the neighborhood change seems to pain Rocca personally. When he was a kid, familiarity defined the place, and the Boston Police Department was all “Mickey Mouse cops,” guys too fat to actually want to get out of their cruisers and chase you. But it’s all over, he clucks: “If you want a name for your article, it’s ‘The Last Days of Southie.'”

Still, though, he seems to know everyone: Every few feet it’s “hey kid,” “hey Jimbo,” “hey bucko.” At one point he spots a friend getting out of a car, pretends to slam the door on his head, then moves on with a chuckle. Later, his boxing trainer runs up to tell him he’s loving the show. The trainer pumps my hand, too, sure he’s seen me around before.

We walk up to 8th Street and Mirisola’s, the Italian restaurant where Rocca and his buddies usually hang. (It’s across the street from the L Street Tavern, where Chuckie tells the story about his uncle stealing the Statie’s car). Then we catch sight of Pat Nee across the street. Rocca tells me to turn the tape recorder off and hang back, and he trots over.

On the show, Nee runs the Southie crew. In real life, he’s a former combatant of Whitey’s — they tried to kill each other once or twice — turned accomplice. Nee did time for helping Whitey run guns to the IRA: In 1983, they loaded a small boat, named the Valhalla, with a half-million dollars worth of mini–machine guns, shotguns, and a ton of military explosives, then sent it into the Atlantic. A year earlier, Whitey killed Michael Donahue, a local truck driver who had the misfortune of giving his friend Brian Halloran, a hood and suspected informant, a ride home. A second gunman on the scene was never identified; according to Bulger’s former muscle Stephen “The Rifleman” Flemmi, that man was Pat Nee. Nee would have been called to testify during the Bulger trial, but was excused after incessantly insisting he’d only invoke his Fifth Amendment rights against self-incrimination.

“Pat’s getting a raw deal right now,” Rocca says, after hustling back. “Everybody’s fucking talking shit about stuff that he has nothing to do with.” The local media has hammered Nee for doing the show, but Rocca waves it off. “Pat’s a family man. He’s got kids and he’s got grandkids and that’s no. 1 for him, how to support them. We’re all looking for a way to support our family. We’re all looking for a payday.”

The Boston Globe, reporting from Southie the day Whitey was caught, captured a perfectly apt scene: the lifers, trying to make sense of it. Some were cautiously pleased; others lingered on that long-ago party line, that Whitey was good for the neighborhood, that he gave people jobs and kept out the drugs. Others just kind of shrugged. One gentleman, apparently too busy to stop, drifts by the camera. “Yep, we gawwt Whitey,” he shouts out. And then he turns back, just for a moment, to offer a perfect tease of a non sequitur: “If they can catch Osama bin Laden, they can catch anybody!”

That particular swirl of clannish insularity, outsize brashness, preternatural pride, and an above-all fealty to just cut the fuckin’ bullshit already — if you’re wondering why pop culture’s still so obsessed with roughneck Boston, that, right there, is it. Reality TV has tried to caricaturize it, and can’t quite seem to get it right. For now, then, we settle for the real thing.

Meanwhile, Rocca will keep an eye out for that payday. At one point we talk about Massachusetts’s recent move to legalize gambling, and he’s quick to sketch out some plans. “It won’t take long until everything is legal,” Rocca says. “And when it is, I want in: my own weed shop, and my own book. Me and my crew, we could put together a nice little book. A nice little book.”