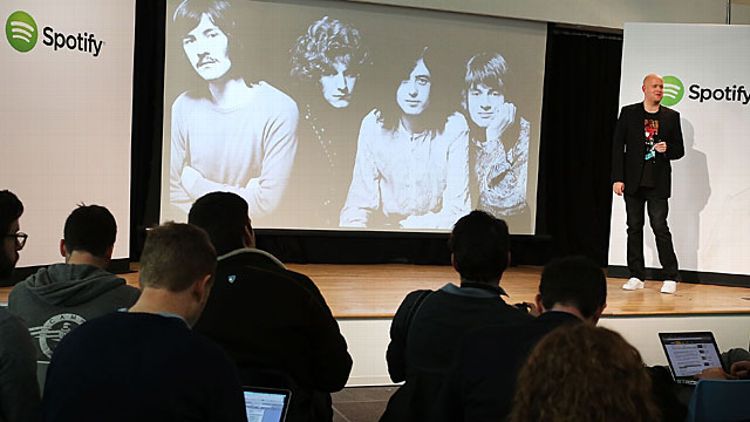 Led Zeppelin, one of the very last iconic bands to withhold their songs from streaming services, finally caved. Spotify added the first two albums today and will continue adding two releases per day until Sunday, when the rest of the catalogue will be added. Strange strategy, but terribly exciting for the 450 people who’ve been waiting their entire teenage lives to hear Led Zeppelin while wanting to do it chronologically, record by record, without paying any money, while also experiencing at least a little of the between-albums anticipation fans must have felt in real time. I guess. (Despite the rollout weirdness, it’s great news. If you’ve got all the Zep records in your iTunes but use Spotify much more [hi!], this changes everything/some of your playlists.)

YouTube’s 2013 in review, set to the sound of “Blurred Lucky Gentlefox” by Macklemore & Kid President. [h/t]

Speaking of YouTube: The company made $5.6 billion on ads this year. Jesus.

Will Arnett, Aaron Paul, and Amy Sedaris are voicing an animated Netflix series called Bojack Horseman. We’ll find out if Netflix has a new Archer on its hands in six months or so.

The SAG Awards have unleashed their nominees. Our girl June Squibb got some love for Nebraska.

There is a teaser for Wahlburgers. Marky looks pretty bleak about doing this, no matter what he says.

Emojis have jumped from your phone into an art gallery. (Should we thank Aziz Ansari?)

Stereogum took a bullet for us all and ranked Kanye’s 17 best rants from 2013. (“Rant,” while rarely the correct word for Kanye’s insights, is a special kind of misnomer here, considering the no. 1 spot goes to … a song. Great list though. Except “YOU AIN’T GOT THE ANSWERS, SWAY!!” is no. 1 forever.)

And Yeezy actually took that Grammy snub in stride! [h/t]