Skip It, Watch It, or Binge It? Netflix’s ‘BoJack Horseman’

BoJack Horseman is a raunchy cartoon about a humanoid horse, voiced by Will Arnett, who starred on a dumb hit sitcom called Horsin’ Around 18 years before the series takes place. Created by Raphael Bob-Waksberg, BoJack is Netflix’s first dip into adult-oriented animation, and it got renewed for a second season on Tuesday, four days after its debut. The voice work comes almost exclusively from TV staples and comedy-nerd heroes like Patton Oswalt, Alison Brie, Aaron Paul, Amy Sedaris, Paul F. Tompkins, Aisha Tyler, and Kristen Schaal. But despite all that talent and a deep reservoir of bizarre humor and spectacular sight gags, BoJack’s 12 episodes are an oddly slow burn in the laughs department. This show — particularly at the outset — is much more interested in making you nod, smile, and get into its narrative than making you chuckle.

We here at Grantland Industries know your time is important. So let’s answer the crucial question: Should you skip it, watch it, or binge it?

Does your life need this cartoon? If you’ve got cable, you can flip to FXX right now and watch hundreds of Simpsons episodes playing in sequence. If you’re a South Park fan, Comedy Central has nearly every episode available to stream for free. Netflix itself has Archer, Bob’s Burgers, The Boondocks, The Venture Bros., and Adventure Time competing for your adult-toon slot. So if BoJack’s nearly laughless pilot isn’t enough for you to justify a new show on account of its newness or its Netflix-ness, and if BoJack’s only marginally better second episode isn’t enough, either, then yeah, go watch any of those other cartoons. You’re fine.

And man, if you’re an aesthete, definitely skip: If there’s a unified style here, it’s “stoner’s high school notebook full of animal doodles.” Aside from all the (amazing!) man-size pigeons and hippopotami (more on those in a minute), there’s nothing especially creative happening, visually. It’s lazy colorful realism, with clunky movements reminiscent of a web series, which BoJack more or less is.

If you have patience and/or live in a state that allows the use of cannabinoids, BoJack does get a lot better, on an episode-by-episode basis. It’s not till Episode 3 that BoJack sleeps with his onetime TV daughter, now an adult Hollywood train wreck. (She’s also … a human. Casual, weird bestiality!) In the one after that, BoJack’s made to listen to a rock opera composed and sung by his roommate, Todd (Aaron Paul); at the end, his version of constructive criticism is: “That was — and I don’t say this lightly — worse than a hundred September 11ths.” Strong comedy lies semi-dormant in this show’s DNA, even with wonky pacing and execution. It takes awhile to know what you’re watching, but once you’ve figured it out, it has its pleasures.

While BoJack traffics in many things we’ve seen many times — cursing, sex, a phenomenally self-involved protagonist — it is, at its core, something new and unique. It’s surprisingly fun to spend time in a world where the entire animal kingdom has been anthropomorphized and integrated into society. (How or why this happens is not clear by the midpoint of Season 1, making it that much goofier.) Watching the animal sight gags accumulate is enough reason to slowly work through an entire season of often unfunny, sometimes boring, always-too-long 25-minute episodes. For example: 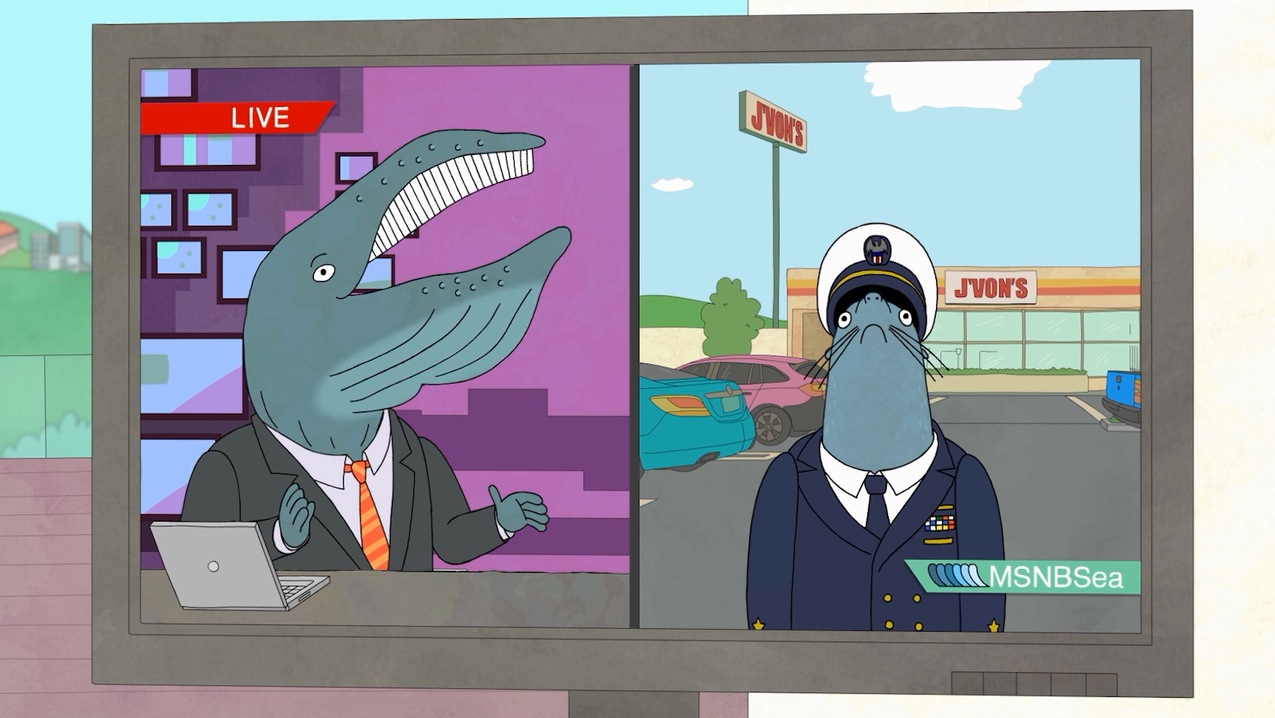 That’s a Keith Olbermann–esque whale (voiced by Olbermann) anchoring MSNBSea; his sign-off is blowing water out of his spout. This is played quick and straight. We’ve also got lemurs wilding out at an around-the-clock rager, a rhinoceros playing muscle for a drug cartel, a mariachi trio comprised of two toads and a human, and a pelican bartender. There’s a dolphin diva named Sextina Aquafina. Paul F. Tompkins plays a shallow, muscle-shirted yellow Lab named Mr. Peanutbutter, another former sitcom star.

There’s so much more. In lieu of “cock-a-doodle-doo,” a jogging rooster screams, “WAKE UP, IT’S THE MORNING!” Ditzy dogs in a supermarket talk about how they love chocolate, but it will literally kill them. A high-strung penguin — one of many characters voiced magnificently by Patton Oswalt — is an employee of Penguin, the publishing house, where Antarctic editors do belly slides in reception and occasionally throw themselves out of windows because business is so bad. In Episode 5, there’s a funeral home run by maggots. 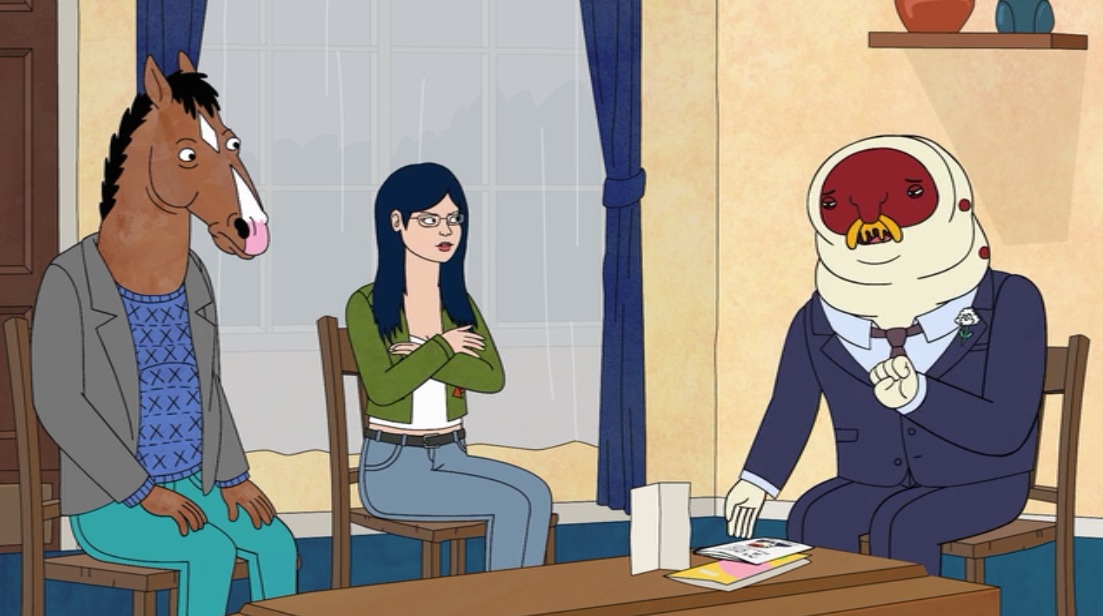 The jokes play mostly in the key of “ah, I see what you did there,” but that can be a beautiful thing. The little Easter egg moments are generally worthy, too, like the crawl on MSNBSea: “New Yorker Goes to Italy, Complains About Pizza” gives way to “Scientists Discover Water on Ocean Floor” gives way to “I Wanted to Write Novels, You Know.”

BoJack swings at the low-hanging fruit of celebrity culture, but does so with enough dark, idiosyncratic passion that the topic becomes fun again. BoJack’s youngest TV daughter, Sarah Lynn, grows up into a cross between Britney Spears, Lindsay Lohan, Miley Cyrus, and every young starlet who has fizzled or fallen. “I’m at a place right now where I never need to grow as a person or rise to an occasion because I can constantly just surround myself with sycophants and enablers until I die tragically young,” Sarah Lynn tells BoJack after they hook up. “Yeah — it’s pretty much too late for me. Welp, them’s the breaks! Take it sleazy, everybody!” In a flashback to Sarah Lynn’s childhood, where she fantasizes about a post-showbiz career, her momager blithely proclaims, “Sweetheart, Mommy didn’t do what Mommy did to that Star Search producer so that you could be an architect.”

The most striking component of BoJack is that bleakness. Arnett is gently expanding out of his typical gruff, clueless man-child shtick and adding extra loneliness, sadness, and abandonment. This guy/horse is going on two decades with no purpose. Gob Bluth screwed to his own hit record; BoJack makes love to his sitcom reruns. It’s clear, as BoJack works on his high-stakes autobiography with ghost writer Diane Nguyen (Alison Brie, definitely the best performance here), that the golden years weren’t shiny because BoJack was famous, but because he got to escape his own messy childhood and join a TV family.

Like BoJack, Arnett is living — probably forever — in the shadow of a hit show. It’s not long before that real-life parallel becomes hard to resist. Especially, again, if there are cannabinoids nearby.