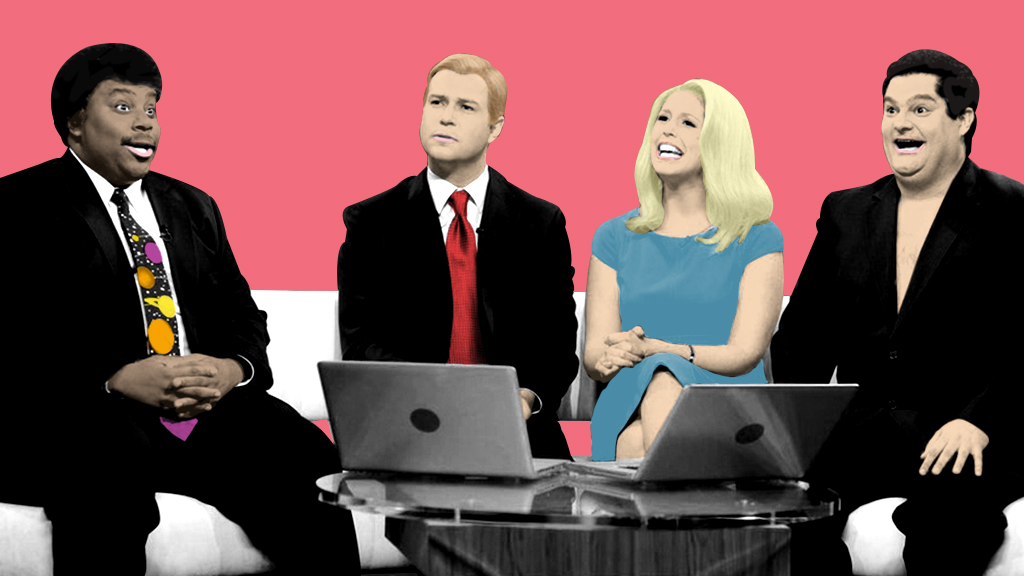 Forty years ago, in the beginning, the first two words in Saturday Night Live mattered far more than the third. In 1975, only certain types of people watched television late on a Saturday night: loners and stoners, outcasts, shut-ins, the very young, and the very, very bored. Naming the show after its suspect time slot was a dog whistle to those likely either to see themselves as a member of the cast of misfits or to see the future of TV. It was an invitation to escape. Sure, the destination was a graveyard — but look at everybody dancing!

In fact, for the first year and a half of the show, the title had only two words. Though it never broadcast from tape, NBC’s Saturday Night didn’t become Saturday Night Live until March of 1977. (An ill-advised ABC variety show starring Howard Cosell had been using the name.) It’s not that the “live” part of the show was an afterthought, exactly. According to Tom Shales and Jim Miller’s indispensable Live From New York, Lorne Michaels, when he wasn’t palling around with Paul Simon or gobbling ’shrooms in the desert, insisted on it. Live TV was both an homage to and an echo of the earliest days of the business, when outsize talents like Milton Berle and Sid Caesar were making up the rules as they went along. Michaels knew his target audience was too young to connect to that history, but he hoped the same spirit of invention might somehow translate and give him the spiritual space to start something fresh, as if rebooting the entire medium were the only way to save it.

Still, it wasn’t an easy sell. To those on the outside, it was an oddity, a throwback affectation. NBC hadn’t broadcast an original series live since Howdy Doody went off the air in 1960, and the lack of safety net made for some rough landings. On one early occasion, viewers tuning in to see wacky samurai were instead greeted by a blank, gray screen. To those on the inside, the format was an ever-present, ever-tightening noose. “Everyone was quite terrified about the live aspect of the show,” comedian and frequent guest Robert Klein told Shales and Miller. When asked what she remembered about her early hosting turns, Candice Bergen told them simply, “I remember the terror.”

Fear, of course, can be fuel. And in retrospect, it’s easy to see how the impossible demands of the live schedule came to define SNL, both comedically and culturally. (As Albert Brooks put it, “What happens when you stay up until eleven-thirty? Guys like Belushi do nine gallons of coke to make it up that late.”)1 Even when the ferocious coke snowstorms of the ’70s and ’80s thawed into an ocean of the diet, liquid, and legal variety in the ’00s, all the heavy lifting still occurred in the wee small hours of Tuesday’s infamous all-night writing session. The show’s manic energy still built and bubbled like a pressure cooker throughout the week, requiring an insane level of calibration to correctly time the eventual explosion. (In a February interview, Lorne Michaels said that current star Kate McKinnon had to learn not to “peak too soon” at dress rehearsal.) It’s a zero-to-100 — and then back to zero — lifestyle that can lead to brilliant inspiration and dangerous cases of whiplash. Lorne’s stubborn insistence on doing it live has shortened careers, wrecked marriages, and driven highly paid executives batty. And yet, here’s the funny thing — funnier, even, than Albert Brooks measuring out drugs by the gallon: As SNL rounds the corner into its fifth decade, doing it live is the very thing that has guaranteed the show immortality.

There was a time, not too long ago, when none of this seemed likely. As SNL celebrated its 30th anniversary, the live broadcast remained existential but also provided plenty of angst. On Comedy Central, programs like The Daily Show reminded people of the nimbleness and value of editing. On Fox, MADtv reminded networks of the economy and control of tape. And with SNL running like a machine — a patented 30 Rock–style fart machine on occasion, but still — the lack of delay led mostly to aggravation. Think of Ashlee Simpson’s infamous jig or nearly anything featuring Jimmy Fallon during his six-year tenure. A fan first and a performer second, Fallon broke so many times, the studio had to be swept clean after every sketch. To watch episodes from this era now is to wish for less cowbell. It’s borderline criminal that Will Ferrell’s permanent record is marred by Fallon’s inability to hold it together. Check out the immortal “Behind the Music” sketch and see what stands out: Other than Ferrell’s bulging midsection, it’s Fallon’s off-book giggle. (He had one job!) Ferrell was painting masterpieces, but, thanks to the single-take nature of SNL, what we’re left with is a handful of Polaroids.

In fact, what finally pushed SNL, kicking and screaming, into the Internet era was a fateful move away from immediacy. When “Lazy Sunday” exploded onto a nascent YouTube in late 2005, it blew the doors off the show, transforming it from clubhouse to open bar. Even the name seemed prescient: Saturday nights could now be experienced anytime, anywhere — even in line for a cupcake shop or while buying tickets for a “dreamworld of magic.” Andy Samberg and his Lonely Island crew triple-handledly rescued Saturday Night Live — not from irrelevance, maybe, but from a long, slow fade on the cultural fringe. That’s precisely where Lorne had intentionally set up shop in the ’70s, of course, but the mainstream had changed plenty since then, as had the definition of cool. Now, inclusivity was in. Access was to be expected, not earned. By freeing Saturday Night Live from both the limits of Saturday nights and the pressures of being live, the Digital Shorts helped establish the show as a truly 21st-century brand: a highly specific type of gentle irreverence available at any hour to be consumed and shared at will. In past decades, SNL attempted to climb upward, into movies. Now it spread sideways, onto Hulu and DVRs. It gobbled up real estate in prime time, it devoured late-night talk shows. The rigors of SNL once chased stars away. Now, as former writer John Mulaney told me recently, everybody comes back.

So why, then, does the live show persist? The answer has more to do with the ways television has changed than how SNL has. In 2014, none of TV’s old rules seem to apply. Hit shows leak viewers like colanders, established stars and brands earn recognition but no ratings, and even towering juggernauts like American Idol have been brought perilously low. With broadcast options expanding and network margins shrinking, the definition of success continues to be defined downward. Only one thing appears immune to the ravages of this new diminished reality: the live broadcast. Sports, awards shows, and ginned-up, back-to-the-future events like musicals have all seen their viewership soar of late. (This week’s Emmy Awards were no exception — with 15.6 million viewers, Monday was the most-watched night on any network since the Oscars on March 2.) All sorts of industry buzzwords and acronyms can be used to explain this, but the only one that really matters is FOMO: fear of missing out. A culture of instant reaction needs something unexpected to react to. Dramas can be saved and savored, reality shows can be binged, but live broadcasts have become essential, immediate viewing.2

For this reason alone, Saturday Night Live will never die. While its quality still varies, the ratings now rarely do. (In fact, during NBC’s recent disaster swoon, SNL was one of the few points of light. In the 2012-13 season, the 38-year-old show provided the network with its highest rating in the coveted 18-to-49-year-old demographic.) And the show’s value goes far beyond traditional metrics. While other networks appear corporate and remote, Studio 8H provides NBC with a very public greenroom, a place where talent gathers and — this is key — actually has fun. Never exactly cutthroat (in front of the cameras, anyway), SNL has become even warmer and cuddlier in recent years, positioning itself as a safe landing spot for all manner of troubled celebrities and politicians. Lindsay Lohan and Sarah Palin may be targets, but they and their handlers know SNL will always provide them with the chance to be in on the joke. Increasingly, that’s something the audience wants as well. Even those of us who rolled our eyes at Jimmy Fallon breaking cheered when Bill Hader would regularly shatter as Stefon. The fragility of the gag is now baked-in. Yesterday’s cheap Polaroids become today’s coveted Snapchats. The moment is more valuable than the memory.

There’s no question this past season was the weakest in at least a decade. Saturday Night Live has endured the loss of major stars many times over, but it’s rarely had to replace so much vital glue: If Kristen Wiig was a supernova, Bill Hader and Fred Armisen kept the lights on. Still, I’ll keep watching — not in the hope that something will go wrong, but with faith that things will eventually go right. (That 2015 is a major anniversary and 2016 is a presidential election help considerably on that score.) Down years happen to SNL, but they’re no longer potentially fatal. In fact, they barely matter at all. The franchise matters more than the players;3 the potential matters more than the reality. SNL is never truly sunk, because it never stops splashing. Great things don’t always happen. But we tune in because, in a manner unlike any other series on television, there’s always the delicious possibility that they will.

Skip It, Watch It, or Binge It? Netflix’s ‘BoJack Horseman’