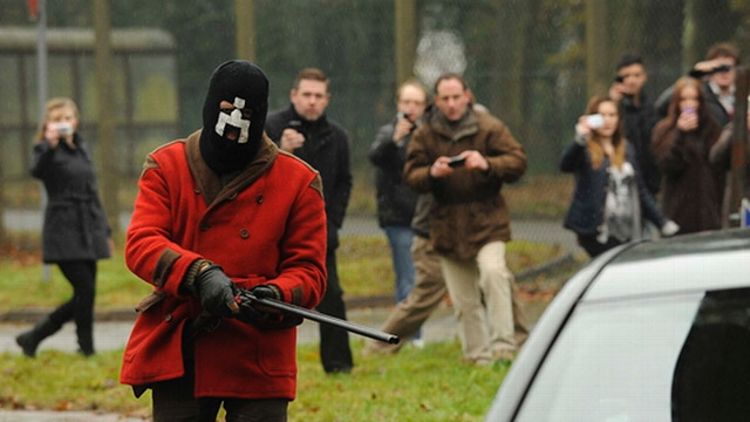 Note: DirecTV decided to air episodes out of order last night, so this is the recap for next week’s episode. I’ll recap last night’s episode next week. Long live the Audience network!

One of the many great things about the episodes of Black Mirror we’ve seen thus far is that you haven’t had to do too much explaining and rationalizing to yourself about them. I won’t say that’s a hard-and-fast tenet of good sci-fi — I’ve gotten a kick out of plenty of convoluted, hole-filled genre premises in the past (hi, distant “White Bear” cousin The Purge) — but it definitely helps provoke loftier levels of rumination if you’ve got a solid slab of a foundation. “The National Anthem” and “The Entire History of You” are pretty close to airtight, as far as covering all visible bases of their premises; they require no cross-examination of their plausibility, because of course it’s plausible; that’s the whole point, that’s why it’s scary. “White Bear,” however, is the first installment that I found myself dismantling afterward, rather than building upon in my mind. For me, the difference between it and its predecessors is the difference between horror and sci-fi: Its visceral punch is undeniably effective, but it didn’t leave me with nearly as much to mull over on the ride home (from my couch to my kitchen).

As a nightmare, which “White Bear” definitely is, it impressionistically filters through all the themes of dehumanization that Black Mirror has had so much fun (“fun”) with so far, warping them into an inescapable, familiar-but-not terrorscape. When Victoria (Lenora Crichlow of the original U.K. version of Being Human) finally gets the “backstory” from Jem (Tuppence Middleton) — a mysterious signal suddenly showed up on every electronic device with a screen, turning almost everyone into mindless, endlessly recording drones, and a special few into homicidal maniacs — it seems a little too much like the premise for a bad Dumpuary thriller than what we’re accustomed to from this show. Even once the curtain is pulled back and the central ruse is revealed, there’s still a blanket of absurdity over the premise. So they set up a state park and visitor center designed specifically to punish one person? People show up by the busload to record this on their phones? What do they do to the first-degree murderers? Is this bankrolled by the government? By WorldStarHipHop? Nice torture budget, alternate-future U.K.!

The one interesting question at the center of the episode is actually a pretty juicy moral one: whether our bodies or our minds are accountable when we commit a horrendous crime, and how much justice relies on memory. The episode deliberately builds our sympathy for Victoria for its first half, because she’s scared and has no recollection of how she got there, and we can identify with that. But even once we’re told this person we’ve been empathizing with and rooting for was guilty of aiding and abetting a child’s murder, it’s hard to be mad at her — horrified at what she did, sure, but at the memory-less husk of a person in sweatpants who just endured hours of psychological torture and is about to endure it again? Do you deserve to be punished if you don’t remember what you did? There was recently a great, brutal episode of Radiolab that discussed this moral dilemma with regard to mental illness. If we can pin a crime on a physical part of the brain, does that free the rest of the person from blame? A trickier, stickier version of “White Bear” could envision a future when would-be death row inmates just get their memories wiped. Even if such a thing “cured” criminals, even if they went on to live productive, meaningful lives and contribute positively to their communities, would we be OK with that, or would our lust for justice outweigh our desire for peace?

“White Bear” is a far, far less interesting episode without the amnesia factor, and though the idea of wiping Victoria’s memory every day doesn’t seem exactly practical from a justice standpoint, the episode seems even sillier without it. I don’t think the White Bear Justice Park would get many visitors in real life, but the episode is an interesting, if far-fetched, musing on social revenge. It’s like an elaborate curse you mutter at someone so absorbed in the act of recording that they don’t obey common courtesies, brought to precarious life — “I hope in the future they punish people like you in a theme park where you get chased around with a shotgun and everyone just records it on their phone!” Of course, if we all have our Grains implanted by then, this isn’t even an issue to begin with.