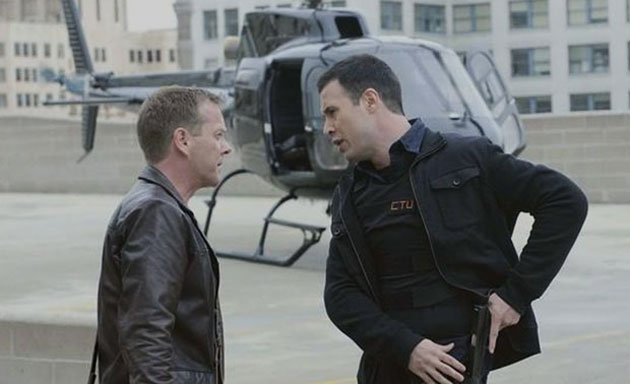 At Comic-Con this weekend, Freddie Prinze Jr. let it slip to ABC News that he is not a fan of his former 24 co-star Kiefer Sutherland. His experience acting alongside Sutherland was apparently so traumatic that it made Prinze Jr. want to quit the business entirely. It’s the beef nobody could have predicted, between two sons of Hollywood who have both made good in their own way. Was Freddie out of line? Does Kiefer have something to hide? It’s time to chop up this unexpected new beef.

In December of 1966, Kiefer William Frederick Dempsey George Rufus Sutherland and twin sister Rachel are born to Canadian actors Shirley Douglas and Donald Sutherland in London.  Kiefer is named for writer/director Warren Kiefer, who directed Italian horror films under the pen name Lorenzo Sabatini and gave Donald his first real feature-film gig. The Sutherlands move to Corona, California, and divorce in 1970. Kiefer follows his mother to Toronto in 1975, where he attends school. As a young man, he moves to Hollywood and becomes roommates with another aspiring actor with an established father, Robert Downey Jr. Sutherland lands his first American break playing the bully in Stand by Me, and quickly becomes a name after The Lost Boys. After a varied film career whose highlights include Twin Peaks: Fire Walk With Me, A Few Good Men, and a thrilling broken engagement to Julia Roberts, Sutherland signs up for 24 in 2001. 24 is a huge hit, a conservative wet dream that taps into post-9/11 vigilante fantasies. 24 establishes Kiefer as a bona fide TV star, but in the late 2000s he undergoes a rash of legal problems; a drunk-driving arrest in 2007 is his fourth DUI since 1989. In 2009 he head-butts Proenza Schouler designer Jack McCollough in a misguided attempt to protect Brooke Shields. He later apologizes.

Freddie Prinze Jr. is born in Los Angeles, California, in 1976,  the son of Chico and the Man star Freddie James Prinze Sr. and wife Kathy Elaine Barber. New York transplant Freddie Sr. is a Puerto Rican and Hungarian comedian with a history of depression. A year after Freddie Jr. is born, his father tragically dies at age 22. Chico and the Man‘s producers decided to replace his character (Chico) with a 12-year-old, rather than cancel the show, and it runs for several more years. Freddie Jr. moves with his mother to Albuquerque, New Mexico. After graduating from high school, he returns to L.A. in 1994 to start auditioning, landing a guest role on Family Matters and then becoming a teen heartthrob through movies like I Know What You Did Last Summer and She’s All That. In 2002 he marries his Last Summer co-star Sarah Michelle Gellar. After a string of critically panned moderate successes including two Scooby-Doo films, Freddie signs up to star in a sitcom called Freddie for ABC that only ends up lasting a season. In 2008 he joins the creative staff of WWE  for a year. In 2010 he signs up for the role of Counter-Terrorism Unit operative “Cole Ortiz” on 24’s eighth season, which is its last.

Round 2: “The Most Unprofessional Dude in the World”

In 2013, Fox announces the miniseries 24: Live Another Day, a 12-episode, one-off season that takes place four years after the last episode of the eighth season. It airs in May of 2014. Over the weekend, Freddie Prinze Jr., who is at Comic-Con to promote his voice work on Disney XD’s Star Wars Rebels, gave a no-holds-barred interview with ABC News in which he revealed that he hates Kiefer Sutherland. Like, hates. Sayeth Prinze Jr.: “I did ‘24,’ it was terrible. I hated every moment of it,” Prinze said. “Kiefer was the most unprofessional dude in the world. That’s not me talking trash, I’d say it to his face, I think everyone that’s worked with him has said that.”

He says that the experience scarred him. “I just wanted to quit the business after that. So, I just sort of stopped.” He references his time with the WWE for a positive comparison: “I went and worked for Vince McMahon at the WWE for Christ’s sake and it was a crazier job than working with Kiefer,” he said. “But, at least he was cool and tall. I didn’t have to take my shoes off to do scenes with him, which they made me do. Just put the guy on an apple box or don’t hire me next time. You know I’m 6 feet and he’s 5-foot-4.” SHOTS FIRED BY FREDDIE PRINZE JR.! Sutherland does have a reputation as a loose cannon, and the stories about his drinking are legendary. However, it’s a pretty low blow by Freddie to come at Kiefer for his height, although “just put the guy on an apple box” is some hilarious shade.

Round 3: Turning the Other Kiefer Cheek

On Monday afternoon, Kiefer Sutherland’s rep told the press,“Kiefer worked with Freddie Prinze Jr.more than five years ago, and this is the first he has heard of Freddie’s grievances. Kiefer enjoyed working with Freddie and wishes him the best.” Other people dug up receipts of Sutherland circa Season 8 telling Parade magazine “We have some great actors joining us — Mykelti Williamson is the head of CTU, Freddie Prinze Jr. is playing my partner.” Considering the partnership didn’t go as planned, it’s pretty astounding that Prinze Jr. didn’t spill before now, although maybe nobody asked? Or he just figured there’s a statute of limitations on trash-talking a former employer that ends after five years.

It’s an interesting matchup, between two children of actors who chose to become actors themselves. Both had stints as teen-film heartthrobs and ended up on TV. Even if Kiefer Sutherland is a nightmare to work with, Freddie Prinze Jr. comes off as bitter for dissing him five years after the fact. Then again, perhaps it’s a testament to how difficult white male stars like Sutherland and others of his generation, like Sean Penn and Charlie Sheen, are protected as long as they’re profitable. Naturally it would be frustrating for someone like Prinze Jr. to come into an established work situation like 24 and behave professionally while watching everyone ignore the unprofessional work habits of the show’s big star. Prinze Jr. is getting more attention for the remarks than he’s gotten in years. It might even help him land a good TV role during pilot season, if that’s what he wants. Who knew he had it in him?