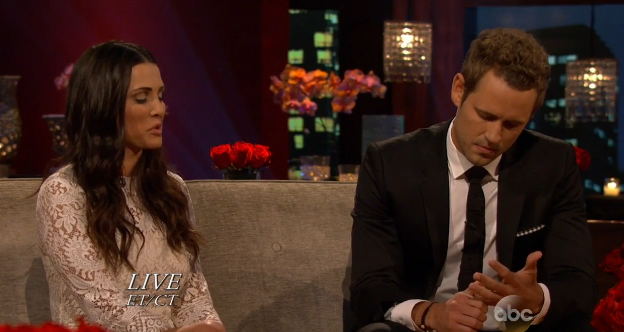 The Bachelorette is over. Thank God. Josh M. and Andi get to ride off into the Atlanta sunset with a lifetime supply of Suave Salon Professionals haircare products, and Nick V. is shown the studio door, not before lobbing a barely audible reality-etiquette-breaking grenade into the studio audience. But we’ll get to that in a second. First I want to talk about Nick’s journey, which is more interesting than either of the show’s winners, and seems to have ended with a pile of dead roses in a rustic wicker wastebasket and most of America believing he should be slapped with a restraining order.

I don’t think Nick is a creep, I think he just made the naive mistake of thinking he could imagine away the entire Bachelorette machine from his “relationship” with Andi. In the early stages of the season he was labeled the skeptic of the show who was gradually convinced to “trust the process.” But I don’t think Nick ever did come to trust the process, because why would a normal human being ever want to trust this shitty process? Rather, Nick’s strategy was to conquer the process so that he could ignore it. He was self-aware enough to realize he could brand himself as the “normal” one on the show, à la Sharleen Joynt on Juan Pablo’s season. But this did not make him “normcore,” as my colleagues have suggested elsewhere on this website. It made him straight-up mumblecore. 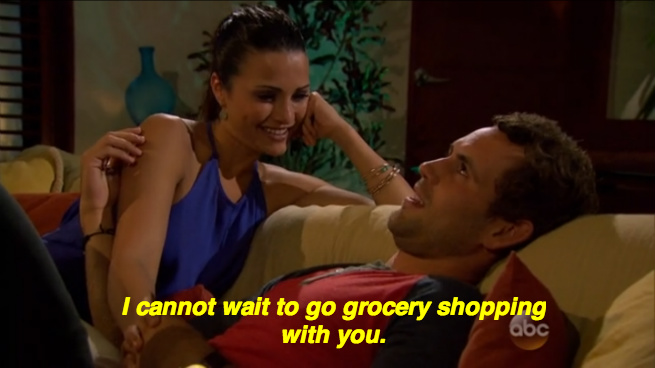 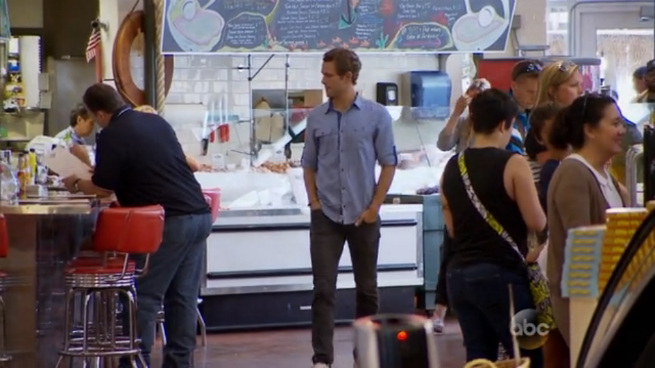 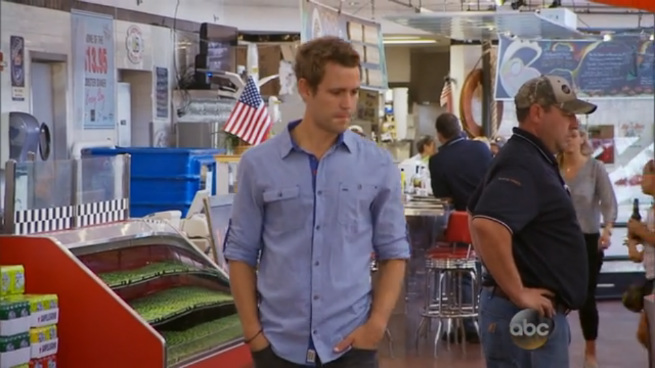 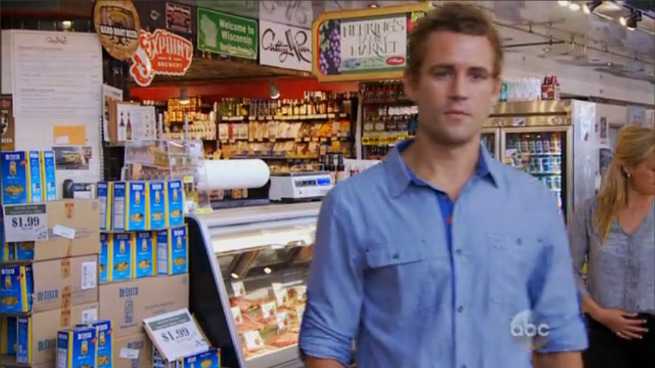 The drawbacks of being mumblecore:

Mumblecore as a lifestyle is a strategy of willful self-denial. It’s naive and calculating at the same time. Nick’s fellow contenders at one point alluded to the fact that he had probably “watched every season” of the show and was analyzing how and when each one-on-one date and elimination would come to pass, and that this was a sign he was in it for the wrong reasons. I think that’s probably a fair assumption, if an unfair conclusion. Of course Nick watched a lot of tape, because he probably had the idea in his mind that if he studied hard enough, when game time came he could concentrate fully on falling in love and feeling real emotions.

Nick is a 33-year-old man who grew up in the Midwest. I don’t wanna profile too hard, but I’d be shocked if he didn’t own a few Get Up Kids albums in his lifetime. He’s wearing Chucks during his second failed attempt to talk to Andi at the Men Tell All taping. He’s wearing a skinny black tie to the After the Final Rose taping. On some level he knows what type he’s bringing to the table. It was almost too easy to frame the final days in the Dominican Republic as the geek vs. the jock, a battle that the aughts taught us the geek should always win because his feelings are more real and delicate than anyone else’s in the whole wide world, and therefore should be catered to. “When Andi sent him home, Nick was devastated, the likes of which we’ve rarely experienced in this show,” Chris Harrison said at the top of ATFR, furthering the narrative like the reality pro he is. 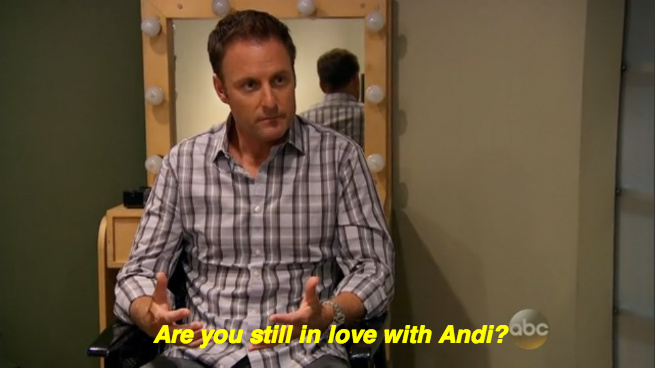 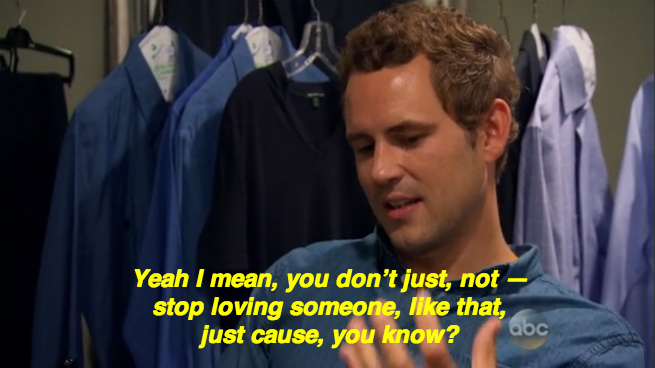 NO, NICK. I DON’T KNOW. YOU’RE SUPPOSED TO STOP LOVING THE LADY YOU MET ON THE TV AND GO GET ALCOHOL POISONING ON BACHELOR IN PARADISE WITH ALL OF THE OTHER KIDS.

So this was Nick’s game. Play it real, and assume that Andi (and America) wanted real. Say she makes you feel like a “teenage boy with a crush.” Ramble a lot. Talk about how much you ramble. Dig a tunnel to the center of the universe.

Nick’s three reported attempts to meet with Andi after shooting wrapped on the season proper was his storm-battered ship of true emotions fighting to escape the perfectly engineered clutches of Seahaven. But, with some producorial help, he fought his way through, all the way to the wall. And in this moment on After the Final Rose, he had one last chance to prove how real he truly was. Andi “deciding” that the right time to finally talk to him was with a studio audience on live television should have been Nick’s first warning sign, but at this point he had so completely imagined away the trappings of the reality show he had been on for the past several months that he committed the ultimate Bachelor/ette faux pas: pulling back the curtain on the Fantasy Suite. 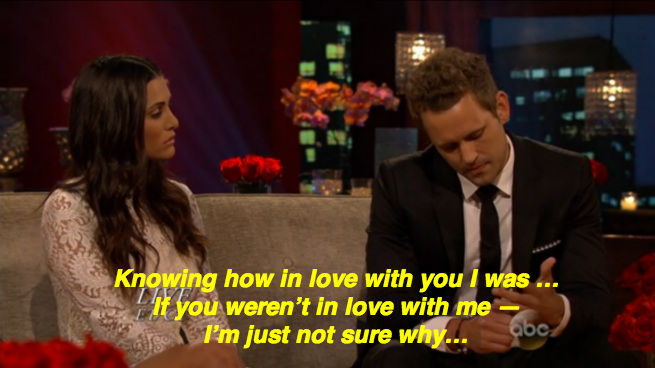 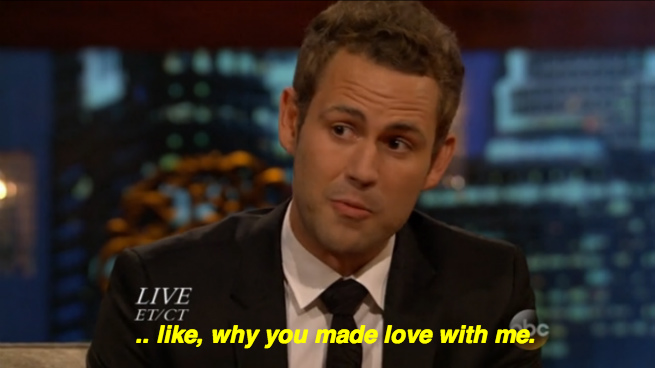 AHHHHHH NICK! WHAT ARE YOU DOING, NICK!? 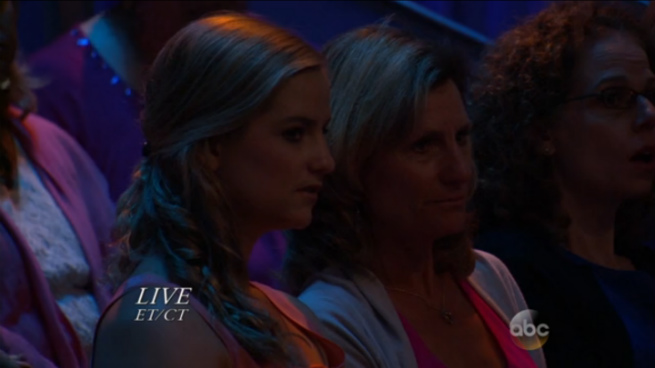 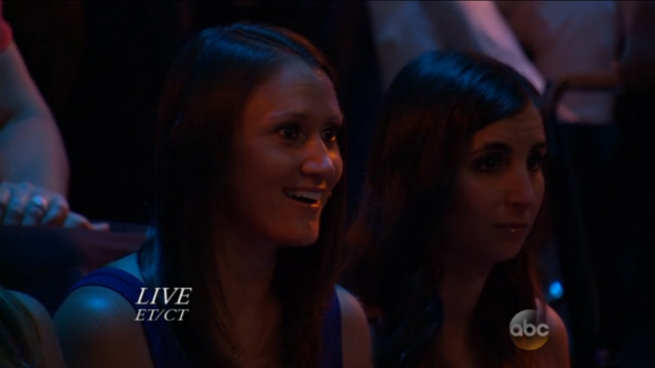 NICK HAS GONE MAD! NICK HAS SHOT AN ARROW INTO THE CEILING!! EVERY POP CULTURE REFERENCE TO DOMED BIOSPHERES! 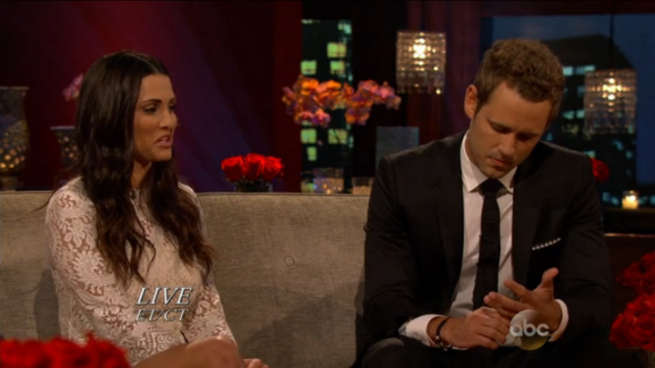 Here is the thing about being Mumblecore Nick: You are so certain of the raw purity of your emotions, so sure that you are different than all the Joshes and Viennas and Jakes and Michelle Moneys out there, so sure that you are essentially unproduceable, that it is stupidly easy for you to be produced. And look at that, you walked right into a “moment” for a dull-as-rocks season finale desperately in need of one. People now know about your bedroom activity in more specificity than they do that of most Bachelor alums. But by all means, don’t sell out and do a stint on Paradise. That would cheapen your real, unique emotions.

A film by Nicholas Viall