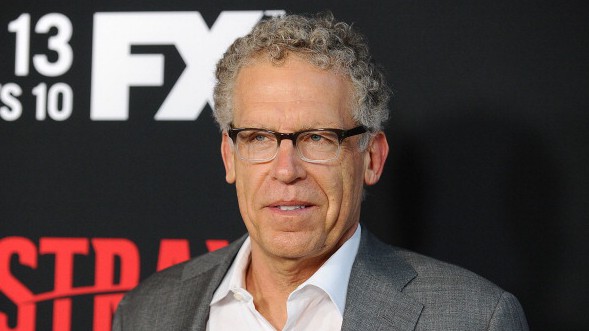 As Amos Barshad recently pointed out, Damon Lindelof and Carlton Cuse were jointly responsible for Lost, but they’ve always been different enough showbiz lifers that there’s not much to gain by comparing them. So let’s just focus on how hard Carlton Cuse is winning! Not, you know, over Damon Lindelof, but just in general, in life and Hollywood.

As Lindelof toils on The Leftovers, Cuse now is juggling five television shows in various stages of life. Monday’s Colony is the fifth of those, a “naturalistic drama about a family forced to make difficult choices as they balance staying together with surviving an existential threat to the human race.” The setting: near-future Los Angeles. The vibe: probably dystopian. The hook: ALIEN TAKEOVER.

The pilot’s happening at USA, the network’s third pickup for the upcoming 2014-15 season. It’s Cuse’s third pickup this year, the others being an Amazon pilot and an A&E straight-to-series order. So now’s a great time to do a status check on all the irons this guy’s got in the fire.

Cuse’s role(s): Co-showrunner with Kerry Ehrin (Friday Night Lights), executive producer, writer
Ratings rundown: The premieres for Seasons 1 and 2 pulled more than 3 million viewers each; those numbers dipped to the mid–2 million range during the course of both seasons.
Longevity: In the middle of this spring’s second season, A&E ordered a 10-episode third season.
Metacritic rating: 66 percent
Greenwald sez: Nothing yet — sorry.

Cuse’s role(s): Showrunner
Ratings rundown: FX’s 13-episode first season just aired its third installment. The premiere drew 2.99 million viewers, and the subsequent episodes dipped to the low 2 millions.
Longevity: Season 2 hasn’t been picked up yet. When the pilot was ordered back in September 2012, director/executive producer Guillermo del Toro said his novel trilogy could sustain a show for roughly three to five seasons.
Metacritic rating: 72 percent
Greenwald sez: “So a documentary The Strain is definitely not. Which is fine! TV needs more flights of fancy. What’s worrisome about the first few hours of the series … is how little room there is for any kind of truth at all: in emotion, in character, or in dialogue.”

Cuse’s role(s): Writer and executive producer alongside Raelle Tucker (True Blood)
The scoop: A&E’s adaptation of France’s The Returned, which is broadcast in the U.S. on SundanceTV. Ten episodes were ordered straight to series back in April.
Premiere date: TBD, likely late 2014 or early 2015
Greenwald sez: About the original version, anyway: “It’s … excellent, one of the more insidiously affecting series I can remember watching. Like Top of the Lake, The Returned hews to its own dreamlike logic, though in this case it feels more like a nightmare.”

Cuse’s role(s): Writer and executive producer alongside Randall Wallace (writer of Braveheart and Pearl Harbor, director of Heaven Is for Real and We Were Soldiers)
The scoop: Amazon put in a pilot order for this period piece “about a Virginia family divided on the eve of the American Civil War” in June. The project started at ABC back in 2011.
Premiere date: The pilot will probably appear in Amazon’s third pilot presentation experiment in late 2014.