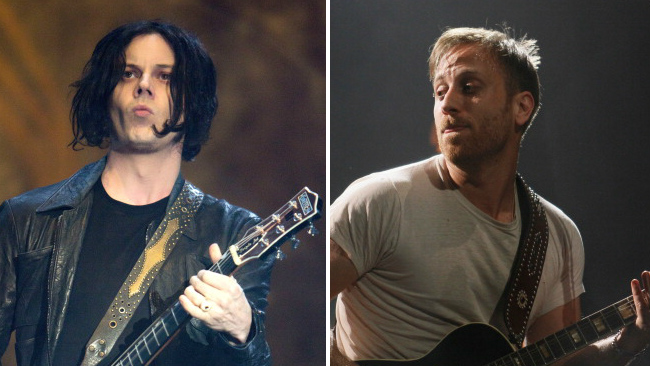 Over the weekend, Jack White posted a long message on his website, apologizing and making amends for a variety of recent transgressions — and, thereby, effectively deading his beef with the Black Keys. It’s too bad, really: The feud between the two rival camps of white bluesmen wasn’t exactly a back-and-forth so much as it was White just unloading over and over again, which wasn’t only entertaining in its own right, but also sowed the seeds for a possibly drawn-out bit of warfare, one that might have given us our fill of angry rock-dude posturing for years to come. Alas, it seems to have already come and gone. And so, let us reminiscence on what once was?

For years, any tension between the two acts was largely speculative. Sure, when the Black Keys broke through nationally, with 2003’s Thickfreakness, it was impossible not to make the comparison to the White Stripes, another bare-bones bluesy duo. But the White Stripes were so hot then — that was the year of Elephant and “Seven Nation Army” — that it hardly seemed to matter to the monolith (for their part, the Black Keys claim to have not heard the White Stripes when they first started out). Years later, though, with the Black Keys an increasingly dominant mainstream rock act, we’d hear rumblings. From a 2012 Rolling Stone piece: “‘I’m a lot more to do with Jay-Z than the Black Keys,” [Jack White] told me in 2010, and though [Dan] Auerbach won’t talk about the incident, White apparently blocked him from entering his studio in Nashville not long ago … Responds White: ‘Anything you’ve ever heard anyone say about me is 100 percent accurate.'” Interesting.

And then (relatively speaking, of course) all hell broke loose. In TMZ-acquired emails from his divorce proceedings, White insists his children not attend the same Nashville-area school as Black Keys frontman Dan Auerbach’s offspring: “My concern with Auerbach is because I don’t want the kids involved in any of that crap … That’s a possible twelve fucking years I’m going to have to be sitting in kids chairs next to that asshole with other people trying to lump us in together.” And then, also: [Auerbach] gets yet another free reign to follow me around and copy me and push himself into my world.” Of course, these were private emails, full of Jack alternately hectoring and pleading with his wife (with whom, upon first separating, he threw a divorce party) to resolve their issues without lawyers and mediation, in the best interest of their children, and so if you read the whole thing, you don’t walk away thinking “BEEF” so much as “the dissolution of a relationship between two people who once loved one another deeply is extremely painful to observe.” Still: BEEF!

And then it was the Black Keys’ turn to fire back, and so they reared back and … were actually totally sweet about the whole thing? Speaking to Rolling Stone, Auerbach basically went no comment (“I don’t know him, so it’s extra-unexpected”), letting his man, drummer Patrick Carney, do the talking: “I actually feel embarrassed for him. “I don’t hold grudges, man. I really don’t. We’ve all said fucked-up shit in private, and divorce is hard.” That’s something all parties can agree on: Carney’s ex-wife has written publicly about their complicated falling out; meanwhile, Auerbach is currently sorting out his separation from his wife (they’re figuring out who gets to keep “Bob Dylan’s hair”).

Ultimately, Carney redirected his ire toward the messenger: “Like, TMZ? Honestly, they should be fucking ashamed of themselves … Everybody should be scrutinized? I don’t believe that. I think that if you come off with a strong platform or moral agenda, then, yeah, maybe you should be scrutinized if there’s a conflict there.  Like, if you’re a TV evangelist who’s doing something awful … But you’re a fucking rock musician, you’re a fucking actor, you’re a fucking model or whatever. It’s your job, you know what I mean? … No one’s doing anything illegal, it’s just that people are living lives that get complicated …  Those e-mails that Jack White wrote that got leaked, as fucked up as that shit is, that was a private conversation, and it doesn’t register to me. You know how horrifying it would be if all of our private shit was aired? And people go sniffing around looking for this shit. And ultimately it’s no one’s business.”

How did White respond to that surprising bit of tenderness? By doubling down, of course, on how the Black Keys are super wack. In his recent Rolling Stone cover story, White explains that his basic stance still stands: “There are kids at school who dress like everybody else, because they don’t know what to do, and there are musicians like that, too. I’ll hear TV commercials where the music’s ripping off sounds of mine, to the point I think it’s me. Half the time, it’s the Black Keys. The other half, it’s a sound-alike song because they couldn’t license one of mine. There’s a whole world that’s totally fine with the watered-down version of the original.”

“Some people will hear that and say ‘Oh, Jack White thinks he’s the first person to play the blues.’ But certain acts open up a market for a certain style. Amy Winehouse: Did she invent white soul? Wearing a beehive? No. But she did something brand new and fresh, altogether as a package, and you see who’s in her wake, from the Duffys to the Lana Del Reys. Adele selling 20 million records? That would not have happened if Amy Winehouse was alive. The White Stripes did the same thing, and in our absence, you’re gonna find someone to fill that. And you get a band like the Black Keys, who said they never heard of the White Stripes? Sure.”

And then, before the mild-mannered Auerbach had the chance to be pushed far enough to respond, White cut himself down. Explaining both that he’d felt pressured to elaborate on points he’d originally made in the private realm of the divorce proceedings, and that a lot of what he said would have been justified and understood in a “behind the curtain” conversation, White nonetheless does toss up the white flag: “I wish the band the Black Keys all the success that they can get. I hope the best for their record label Nonesuch who has such a proud history in music, and in their efforts to bring the Black Keys songs to the world. I hope for massive success also for their producer and songwriter Danger Mouse and for the other musicians that their band employs. Lord knows that I can tell you myself how hard it is to get people to pay attention to a two piece band with a plastic guitar, so any attention that the Black Keys can get in this world I wish it for them, and I hope their record stays in the top ten for many months and they have many more successful albums in their career.”

Of course, at no point does he actually cop to liking their music, or finding it worthwhile in any way; from shouting out Danger Mouse to wishing their record stays in the top ten for an indeterminate “many months,” it’s all a masterful evasion of actual opinions being held. And so, yeah, sure, I would have loved for Jack White to continue blasting the Black Keys for years and years, right in the face of all their calm civility. But, sadly, that’s not going to happen. Decency, maturity, and conciliation won the day. And we are all worse for it.

See all Know Your Beef

Remembering Alice: The 'Brady Bunch' cast pay their respects to the late Ann B. Davis, who died this weekend at 88.