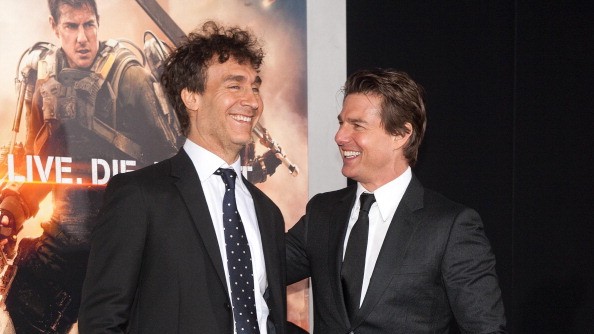 Doug Liman is the 48-year-old American director who was placed in charge of the Summer 2014 Tom Cruise Action Blockbuster. And that movie, Edge of Tomorrow, was surprisingly tricky to make. Here at the 33-year mark in Cruise’s career, one might assume he sticks with directors who’ll follow the well-worn path to a by-the-numbers explosions-and-running movie — but one might be wrong.

For example: Eight weeks before production was set to begin on Edge of Tomorrow, Liman wasn’t satisfied with the third act. He’d had two-thirds of the script completely rewritten and worked through five writers. Tension built among Liman, Cruise, and Emily Blunt. “I was a little under pressure and I snapped,” Liman tells the L.A. Times. “And Emily said, ‘Easy, I’ve never made a movie like this before!’ I fired back, ‘Well, neither have I!’ The room sort of ground to a halt. My producer Erwin Stoff told me later it was the most incredible thing he’d ever heard anyone say: The director telling the stars of the movie that, basically, he had no idea what he was doing.”

That’s a moment when a major actor like, say, Will Smith may have walked. Not Cruise, though. “It didn’t faze me at all. Good. Whatever. There’s no doubt about this guy’s talent, no doubt about his taste and his commitment,” Cruise told the Times. “And one of the ways Doug works, you’re developing the tone as you’re working.”

The Times accordingly tunneled into the many ways Doug Liman can be an “interesting” guy to work with. Consider:

• Liman didn’t just go $10 million over budget on The Bourne Identity — he also made his production crew stay late one day, lighting a forest near Prague so he could play paintball. That also would’ve been a great time to give the “I don’t know what I’m doing!” speech. Probably the best time.
• When Mr. and Mrs. Smith also tilted over budget ($26 million, in this instance), “Liman used his own money to build a set inside his mother’s garage in upstate New York — and destroyed it with a hand grenade,” as one does. Also on that movie, Liman got screenwriter Simon Kinberg (Sherlock Holmes, X-Men: Days of Future Past) to write about 50 different endings. He wound up going with the first one.
• On the second day of filming for Edge of Tomorrow, Liman just reshot everything from the first day.
• Further along, a big scene set at Normandy was supposed to take two weeks and ended up lasting almost three months. Liman called it “workshop-y.” For Blunt, it was more “almost broke my nose on a broadsword–y, WTF are we doing here–ish.”
• Liman has no patience for overbearing studio notes. “I make movies for me and posterity. I’m more scared of history than I am of the studio.” Also: “It’s no secret that my process is a little bit loose and can be a little bit infuriating to a studio if they don’t know what they’re signing up for.” Imagine this guy applying for a regular-person job.

Liman’s general reasoning for his improvisationally frustrating methods? He wants to make a completely different film every time. “I can’t imagine anything else as upsetting as realizing I’m redoing something I did before,” he says. And that happens to be exactly why he got hired for Edge of Tomorrow. Per producer Stoff (The Matrix, I Am Legend): “He has an ability to take a tried and true genre and find something completely new in it, push the familiar genre elements to the back and use the genre to explore something brand new and completely original.” For what it’s worth, the Times says Edge of Tomorrow depicts Tom Cruise “in a totally new light,” which isn’t what the standard-issue Cruise marketing would have you expect.

Liman’s friends, who sound realistic and not terribly supportive, tell him, “You’re only one or two bombs away from being unhireable.” And Liman agrees. His last film, 2010’s Naomi Watts–Sean Penn political thriller Fair Game, did decently with critics but never got a wide enough release to top $24 million — on a $22 million budget. Before that was 2008’s Jumper, which starred Hayden Christensen, and earned $222 million worldwide but tanked with critics. 1996’s Swingers, 2002’s The Bourne Identity, and 2005’s Mr. and Mrs. Smith were all successes — but they’re not enough to tip the confidence scale when it comes to getting in bed with a guy whose style has spawned the term “Limania.” (And it’s not a cool thing, Linsanity-style.)

Edge of Tomorrow might be able to win Liman’s reputation a few points. It made $20 million in 28 cities abroad this past weekend, earning unimpressively in Europe but showing early signs of an eventual success in Asia. Cruise has been raking in much more overseas than in the U.S. for years now, with recent films like Oblivion, Mission: Impossible — Ghost Protocol, and Knight and Day earning twice as much internationally. If Edge of Tomorrow could miraculously stretch anywhere near a $90 million premiere, the way Godzilla, The Amazing Spider-Man 2, and X-Men: Days of Future Past have done in the past month, maybe we wouldn’t hear much about Limania next time around, when he and Tom Hardy adapt Tom Clancy’s Splinter Cell spy game. Unfortunately Edge is tracking to debut at roughly $30 million, so expect a story about Liman being fired after he spends 100 consecutive hours trying to show Hardy the right way to sneak up on someone.

Blockbuster Talk: Did Angelina Jolie Redeem the Mistress of All Evil in 'Maleficent'?