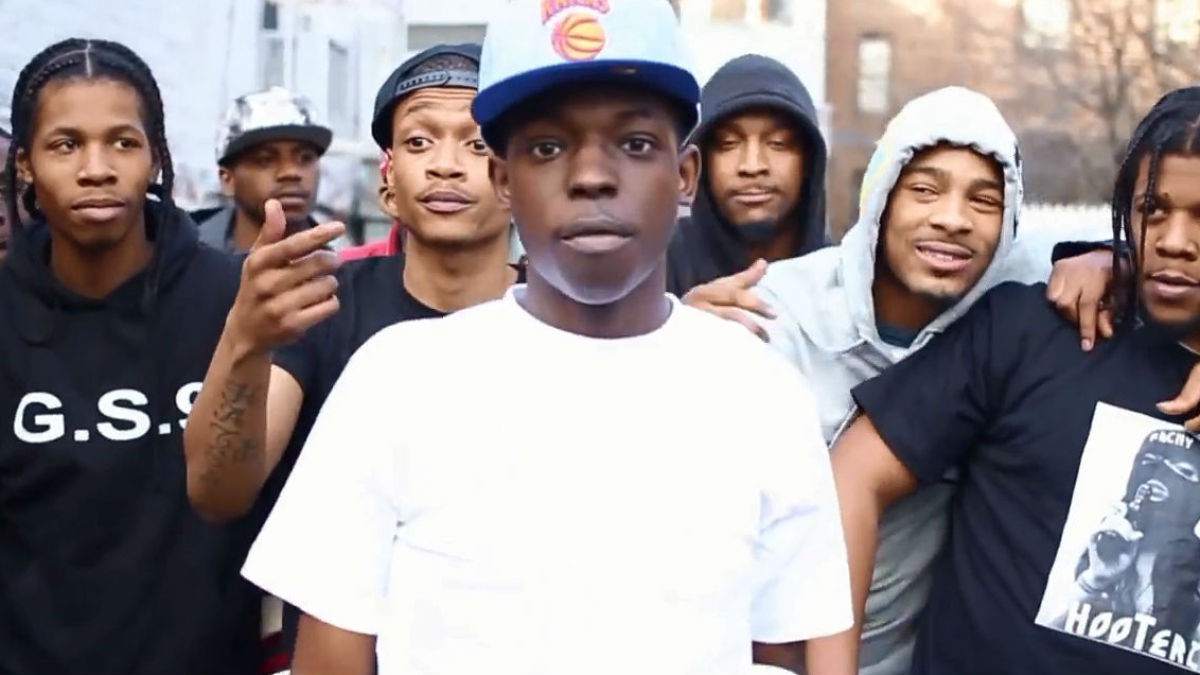 Every day, something major happens in pop culture that I don’t care about. Something that I once would have obsessed over. Something that a former self would want to talk about at length. Now I would rather spend that time thumbing through New York Magazine’s “Best Doctors” issue.

When following the number “27” with the word “old,” snarls typically come from people in their early thirties. Because that “3” in the tens column is a reminder that you’re en route to 40, an emotional rounding up that is the opposite of the “2.” In your twenties, you can hold on to youthful brazenness by rounding down.

Either way, we’re all old.

The worry, however, is losing the ability to understand why you once liked something. Or why people think something is entertaining. Or cool. To suddenly become appalled at things once enjoyed, not only at your former self’s passion, but at anyone who continues to find it intriguing. And, above all, to arrive at a place where you’re denouncing entire segments of culture because a slice of it no longer sits well with you.

It’s a balancing act, staying culturally relevant — wanting to exude social responsibility, but having little desire to be the old dude in the club.

My most recent struggle with age and culture and the convergence of writing about it and living it — and occasionally not living it, because I get tired faster these days — comes from the surprise contender for rap song of the summer.

Before hearing the song, two red flags were immediately thrown in the air. The song has “n​-​-​-​-” in its title and his surname is a fun way of saying “murder.” Despite an ongoing personal vacillation between not truly minding, growing tired of, and feverishly enjoying rap songs with “n​-​-​-​-” in the title (the second biggest rap hit of 2014 had such a stamp), it’s becoming increasingly difficult to support anything murder-related at this age, in this age.

But I did joyously whisper “Murder Inc” for years. And not just on songs that made you grimace and frown. But on happy songs. Like the “I’m Real (Murder Remix)” by J.Lo featuring Ja Rule.

Remember the murder remix? That was a thing. The “Murder Inc” drop was often more happy than menacing.

Seeing the word “shmurda” doesn’t exactly make me tremble. Watching Bobby Shmurda mimic how he would shoot a variety of guns, however, channels less a Charlie’s Angel and more someone who’s just finished shooting a variety of guns. If you’re looking for authenticity, it’s right there. And I am fully content with not liking that, plain and simple. I’m an esteemed veteran of the “Paper Planes”/“Made You Look”/“No Mo Play in GA” school of mimicking gun shots. But watching a 20-year-old air-shoot a gun as he raps about selling crack since the fifth grade isn’t an ideal voluntary listening and viewing experience — the first time I heard the song, I debated tapping out all together.

I didn’t, though. Because the song’s entry point, the primary reason it’s become popular at all — a Vine — is about joy.

It’s the Shmoney Dance, it’s objectively phenomenal, and it has made July a considerably more fun month. On mute, Shmurda looks like he’s dancing to “Waterfalls” with a bad hip, which is why the dance has become a dubbed-over meme instant classic.

And then there’s the nonchalant throw of Shmurda’s snapback, and the sheer lack of concern for where it might land (there actually isn’t any proof it ever hit the ground). Looping the entire sequence — over and over and over again — is a weird cousin of the “tough guy with a soft side” archetype. Because I’m not convinced the dance, nor the song, takes off if this isn’t a song about guns and drugs and brawling.

The song currently sits atop the new Billboard Twitter Emerging Artists chart, which measures the number of song shares on Twitter, and it helped secure Shmurda a record deal with Epic Records earlier this month.

With these highs and lows, there’s a genuine internal conflict about how to understand “Hot N​-​-​-​-.” Luckily, there doesn’t have to be a polarizing verdict. There’s power in realizing that within the same song, there can be a multiplicity of reasons you’re simultaneously drawn in and eager to pull away — reasons that have nothing to do with age, maturity, or responsibility. And feeling both is OK.

Unless you are Bobby Shmurda, a member of his crew, or perhaps a G-Star RAW distributor, you have no idea who he’s talking about for perhaps the first 10 listens, should you make it that far. I only knew Chewy, Shyste, Monte, and Tones were people because I saw their names capitalized in the lyrics. And if I’m making an educated guess, we’re not dealing with the likes of Ali, Murphy Lee, Kyjuan, and City Spud.

But there is something absolutely captivating about the listing of Shmurda’s crew. Even if you don’t know who they are, dedicating part of a verse to friends is a tried and true early-career maneuver in rap. It creates a community. And few things serve as a more effective rallying cry than “Free ________,” even before it’s clear what the person did or if we actually do want them free. (See: Weezy, Pimp C, Gucci, Boosie, Earl, B.G., others.)

It’s a sign you aren’t forgetting your people. And that will typically be a crowd-pleaser, regardless of the content surrounding it.

Hopping back to the St. Lunatics for a second: perhaps you remember “Luven Me” from Nelly’s first album, Country Grammar. On that song, he spends the entire third verse listing every person in Missouri he’s ever met. Like “Hot N​-​-​-​-,” it’s an interesting use of definite song space, choosing the liner notes method for your introduction to the world. But even though I still don’t know a single thing about Herky Jerk, Yellow Mack, Cooter, and Coach — the names Nelly drops — I will never forget where they fall in that verse. And that Nelly appreciated them. Because shout-outs are a form of immortalization. 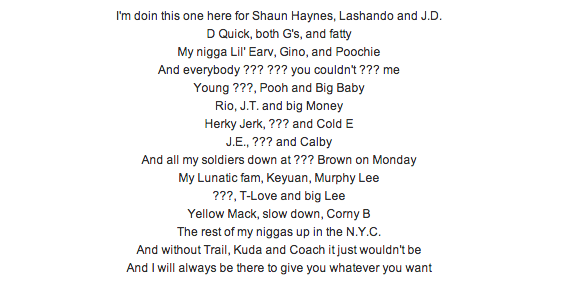 A Slovenian Lyrics Database, on Nelly’s “Luven Me”

Time will tell if the same is true about Meeshie. And Trigger. And Phantom. And A-Raw.

And that beat. It’s not original. Nor was it originally for Bobby Shmurda. But it is great.

Jahlil Beats is very good at his job, a veteran of making menacing beats for the summer months. He is, after all, the man behind Meek Mill’s 2011 hit “Ima Boss,” a song that similarly channeled the club and home invasion.

That was a transcendent beat. A once-a-year piece of production that brings corpses back to life. The beat for “Hot N​-​-​-​-” is not that. It’s not a beat that inherently stops the summer in its tracks like, say, “Pop That.” Also: The beat isn’t even new. Jahlil Beats gave a version of it to Lloyd Banks for a song called “Jackpot,” for an album that never happened, more than two years ago.

But Shmurda’s song fits with these times. “Hot N​-​-​-​-” accomplishes a rare feat, simultaneously exuding New York from the clothes to the crew, with a sound that feels like the last three years of Chicago, laced with multiple “Shawty” references and a dance that’s more likely to come from an Atlanta teen than a young man from East Flatbush.

For better and worse, it’s as if he and the song and the song’s periphery were concocted in a lab. Shmurda as Rap Game Deadpool.

There’s just two minutes and 17 seconds of actual rapping on “Hot N​-​-​-​-.” That’s about a minute less than Kendrick Lamar’s “Control” verse. But like that verse — because it’s just that, a verse — there is no chorus. Shmurda’s song gives you a glimpse into his life, but it doesn’t tell a story. He just sort of shows up, starts rapping, and then, just like that, it’s over.

But there is something musical in the song — a quasi refrain — that compels.

On three occasions, Shmurda vocally stretches a word out — almost singing — as if he’s closing out one section and beginning another.

“Get up out my trap houuuuuuuuuuse.”

“Shawty love the way that I floss ouuuuuuuuuuutttt.”

“But GS for my gun squuuaaaaaaaaad.”

It’s an odd moment of exultation in a noticeably grimy song, almost like a fanfare. It’s a moment that gets people excited. You don’t need to know the lyrics — you can just scream “Ahhhhhhhhhhhh!” and lose it for a few seconds. In fact, it’s a little more pleasing to just vocally launch a vowel into the air than pretend as if you actually have a gun sqaaaaaaaaaad.

The song needs a lyrical moment in which you can ignore the subject matter. These three points in the song are just that. This, along with the dance, are the much needed “fun” parts of the song. I can truly understand why someone would have reservations about “Hot N​-​-​-​-” if they haven’t heard it in a social setting. There’s an aspect of it that’s easily dismissible, or upsetting. And, on its own, it’s not difficult to simply turn off the radio or close the SoundCloud tab. It’s an entirely different thing to be at a party and not jump around and not do a dance and not let a moment wash over you and not pretend that rap music gives you all the feels, regardless of what is being said. I tried for about two seconds this past weekend. And I immediately failed. And I couldn’t be happier that I did.

A friend said this in passing when discussing Shmurda’s claim of selling crack when he was 10 years old. I wasn’t thrilled to accept the degree to which Shmurda is telling the truth, but I also had to helplessly shrug. We don’t know if Shmurda is telling the truth. But I kind of wish he was lying. Imagine Shmurda as New-New, a student at The Dalton School who sneaks out to Brooklyn on the weekends. But I know I’d hate that also, him behaving in a way that simply glorified this unfortunate lifestyle that so many are brought up in — and those existing at a distance from are continuing to profit from. I didn’t know what I wanted, so I was stuck simply with what Shmurda was telling me in his song.

If you’re gonna have fun, if you wanna be yourself, you want to dance, man. A lot of people out here, a lot of people going around talking about grown men don’t dance and gangsters don’t dance, man I dance all day. If you feel good, and you wanna dance, dance. That’s what I like to do.

Bobby Shmurda said this about his dance in his first interview, with Global Grind. There’s something about this quote that immediately wipes out much of my reservations about him and his song. It’s very “Black man in America, you got to be a hard motherfucker, but we all know n​-​-​-​-​- that’s hard all the motherfucking time. You can’t forget to enjoy your goddamn life. We all know n​-​-​-​-​- that’s hard at seven o’clock in the motherfucking morning, you like n​-​-​-​- wait a minute n​-​-​-​-, you angry at breakfast, n​-​-​-​-? You gangbanging on bacon, n​-​-​-​-?”

And I really appreciate that. It’s charming.

Somehow, my takeaways from this song are violence and fun. But they’re in different silos. Day and night. It’s as if Shmurda’s saying, “There is a time to be violent and there is a time to have fun.” Which makes me think, Well at least he’s having fun?

And, again, I don’t know what to do. So I just do the dance. And hope for the best.