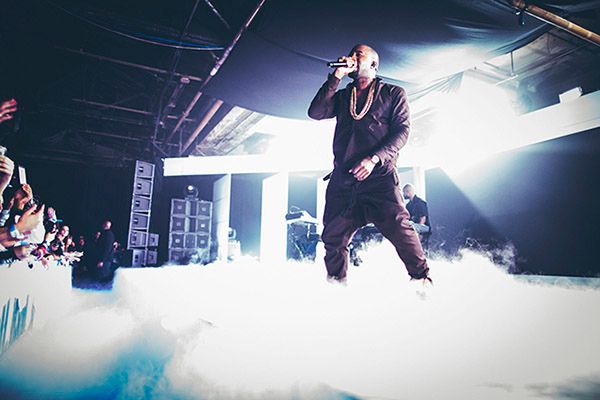 Most people’s reaction to GOOD Music crew album’s Cruel Summer was something along the line of “the singles were fire/oh man, R. Kelly should sing every hook ever/ehhh rest of it was kind of boring.” For true believers in the Gospel of Kanye, however, there was terrifyingly palpable cause for concern. That’s because, for the first time ever, it felt like Kanye wasn’t fully invested. Every other thing Kanye’s put out — even, or actually, especially, his derided 808s & Heartbreak — felt so obsessed over you could practically see the sweat dripping off it. I mean, how could Kanye West not care? Kanye West cares so much about everything. That’s what makes him Kanye West.

The explanation, as our own Rembert Browne had helpfully sketched out, wasn’t that Kanye was cruising, necessarily. He was just getting out the way to let his minions get on. And last night in New York, where Kanye played to a relatively small crowd at the launch party for the Samsung Galaxy Note II, was further proof he hasn’t gone happy and lazy quite yet. Playing a private corporate event seems like a perfectly good time to take a night off, right? Wrong. Mr. West is always on.

While Pauly D and short guys in fitted Yankees caps with Scandinavian model girlfriends snapped cellphone pics from the VIP room, ‘Ye blazed through his rich catalog, punk-rock no-breaks style. Swapping out the skirt he was wearing on the Watch The Throne tour for a more conventional “open black dress shirt and mad chains” look, Kanye got sweaty fast, skipping from the new stuff to the early classics (I sincerely hope he never, ever stops playing “Through The Wire”). He had some props: giant backdrop screens were showing Planet Earth-esque footage of mud slides and melting lava and stuff; meanwhile, the intense smoke machine blasts during “Power” and “Stronger” nearly suffocated us all to death.

The best part, without a doubt, was 808s ballad “Say You Will.” First of all, Kanye told us it was one of his three favorite songs — and, like, of course Kanye West’s favorite Kanye West songs is “Say You Will.” Then, with the track playing out underneath him, he told us an auto-tuned short story in the second person. Junot Diaz style! (Well, the second-person part. The Auto-Tune, not so much).

It was about being back in New York, and texting a girl you want to hang out with, and her texting back that she’s going to her friend’s birthday party but that she’ll hit you up later. You say cool and you go about making your place all nice, getting some wine and some potpourri, and then you wait. But then it gets to be late and she still hasn’t come over, so you text her just a question mark because you’re “too cool to say shit.” And then she says that they got some bottles and sparklers in the club and things got turnt up but she’s still coming over, so now you’re up alone and you’re trying to stay awake — it’s the “battle between sleep and your dick, sleep and your dick, sleep and your dick. Which one is going to win? Can you stay up for your dick?” And then — well, I don’t want to spoil it. This is Kanye’s story. Let’s let him tell it.

So, yep, despite what recent developments may have led you you to believe, ‘Ye’s not taking it easy. For now, and most likely for forever more, our dude stays committed to the cause.