Rembert Explains the ’80s: James Brown & ‘Friends’ at the Beverly Theater in 1983 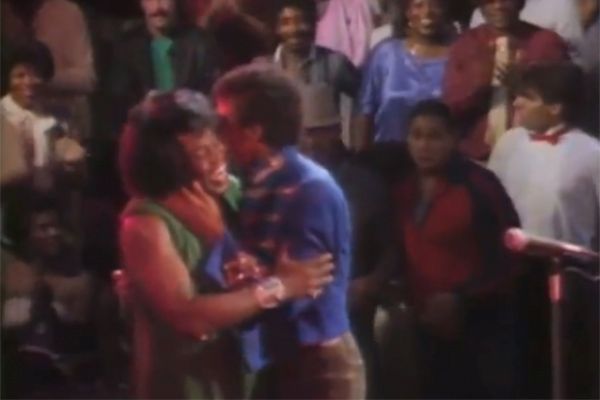 Welcome back to our series Rembert Explains the ’80s. Every so often, we’ll e-mail 25-year-old Rembert Browne a video from the 1980s that he hasn’t seen. Rembert will write down his thoughts as he’s watching the video, then we’ll post those thoughts here. This week’s installment was selected by Grantland reader Michael Ognenovski: James Brown and “Friends” at the Beverly Center, circa 1983. If you have an idea for a future episode of Rembert Explains the ’80s, e-mail us at hollywood@grantland.com.

0:19 I am very fluent in James-speak, but know that your ears aren’t fooling you. He’s yet to say a word in English.

0:20 James’s hair was looking wild but spectacular on this summer evening in ’83.

It’s apparent, however, that the humidity was taking its toll.

“We got another fantastic people for you. You’re too much to be a person, you’re just a people.”

Know that this is the most beautiful thing you can say about someone, I think.

0:44 Kanye rants have NOTHING on James chats. Not even close. Example:

“The surprise is here. A young man I watched grow and grow. Like I said, the artist was so beautiful, you have to jump back sometimes and kiss yourself.”

All said while James is clutching the microphone stand almost for support, with his eyes closed and the zipper on his vest-shirt almost down to his navel. He’s turning the Beverly Center into Pride Rock.

1:12 How much talent does our special guest have, James?

“So much talent it’s running out his ears.”

That’s a ton of talent.

“Let’s give another standing ovation for a young man sitting behind you that you have no idea is in the audience.”

“We talked about this, James. You introduce me, I wave in my Sgt. Pepper jacket, and then you go on with your show. WE TALKED ABOUT THIS, GODFATHER OF SOUL.”

1:45 But here’s the thing. When James repeats something eight times, there’s really no fighting it. Mike knew he wasn’t going to stop, either. James could have gone on like that for 10 minutes.

1:56 Everyone in the crowd is losing his mind, rightfully so, seeing as that, as previously mentioned, this is the greatest moment of all of their lives.

2:05 Brown just stopped the band with a single hand gesture. Only one man should have all that power. His name is James Brown.

EVERYONE ELSE IS FAINTING.

2:19 Mike’s curl is looking fantastic right now. There’s also a subtle part going on, which I very much respect and admire.

2:28 Mike is imitating James, and James is losing his mind.

This will never get old.

2:40 Mike and James hug, which is precious, but equally important is the Easter Bunny band to whom I’ve yet to give any attention.

Sorry, was distracted by two of the five greatest entertainers of all time sharing a stage. Know that your baby-blue getups have been noticed and appreciated.

2:43 Mike is whispering something in James’s ear again.

2:44 STOP WATCHING THIS VIDEO. DO NOT GO TO 2:45. CLICK THE NEXT VIDEO RIGHT NOW. IT IS IMPERATIVE THAT YOU LISTEN TO ME RIGHT NOW.

1:17 Oh, what’s that, James? Michael’s multiple whispers are something worth reporting to the rest of this already-spoiled crowd? Very interesting.

1:35 Michael has retreated to the back of the stage and James has launched himself to the microphone. What’s on the agenda, Godfather?

“And also, give him a big round of applause because he just insisted that I introduce: PRINCE.”

There’s no way this crowd deserved all of this. This was 29 years ago, and I’m sure it’s still the only thing they talk about.

1:49 James is really looking for Prince:

2:12 We see a figure moving through the shadows, one we’re supposed to assume is Prince, but for the first few seconds it’s just a dark blur.

Prince is getting a piggy-back ride from the 10-foot wolf-man from the ’85 American Music Awards.

2:16 Prince just took one of his gloves off with his teeth and flung it into the crowd. And then his human vehicle dropped him off at the stage. Of course that’s what just happened.

2:27 It’s unclear, based on Prince’s immeasurably high level of sass, whether he’s happy to be here. Part of me doesn’t think he knows where he is and part of me thinks he’s about to punch Michael in the face.

Prince got himself a guitar. This, my friends, is how Prince attempts to steal the show from Mike.

2:59 Prince is shredding. This is golden. Tame, but golden.

3:18 Prince just really seductively touched his neck. Just thought I should point that out. Also, all of his clothes are still on. Weird.

3:33 Prince is kneeling and air-humping. It’s about to get downright nasty in here.

3:47 Why did all the ladies start screaming?

There goes the guitar and the shirt. That’s why.

3:57 Sorry Mike, he might have just won this round.

This is great. Two superstars doing their best living room James Brown impressions in front of the man himself. Well done, gentlemen.

4:10 Prince just made his first audible sounds, but they weren’t English words.

They were Prince mating call howl-moan-growl-purrs. I wonder if any of the ladies in the crowd are still alive.

4:21 Prince is about to consummate his relationship with the microphone stand. Congrats to the two of them.

4:31 For a second I forgot this was originally a James Brown concert.

4:38 Prince is also making James-like hand gestures, causing the drummer to hit the symbols. Is James still there? Maybe he just went home.

4:44 Prince just bowed. He’s done. Time to get a ride back to his seat from his personal bearded wagon. Bye, Prince.

This can’t be good.

This is so good.

Bye, Prince, for real this time.

4:53 James just walked over to the lamppost mosh pit to give Prince his jacket. What a guy. Where is Michael? This is kind of a mess. Prince is definitely the drunk girl at the party right now.

5:01 But throughout all the excitement and mayhem and surprises, the band never stopped playing.

Way to go, band. The true unsung heroes of this, one of the greater, weirder, more spontaneous concert happenings, perhaps ever.

Final Note: For those of you that were present at this show, know that August 20, 2013, marks the 30th anniversary of this event. And when it is time to do the Oral History Bracketology 30-for-30 Thinkpiece on it, your voice will be of the utmost importance. Can’t wait.