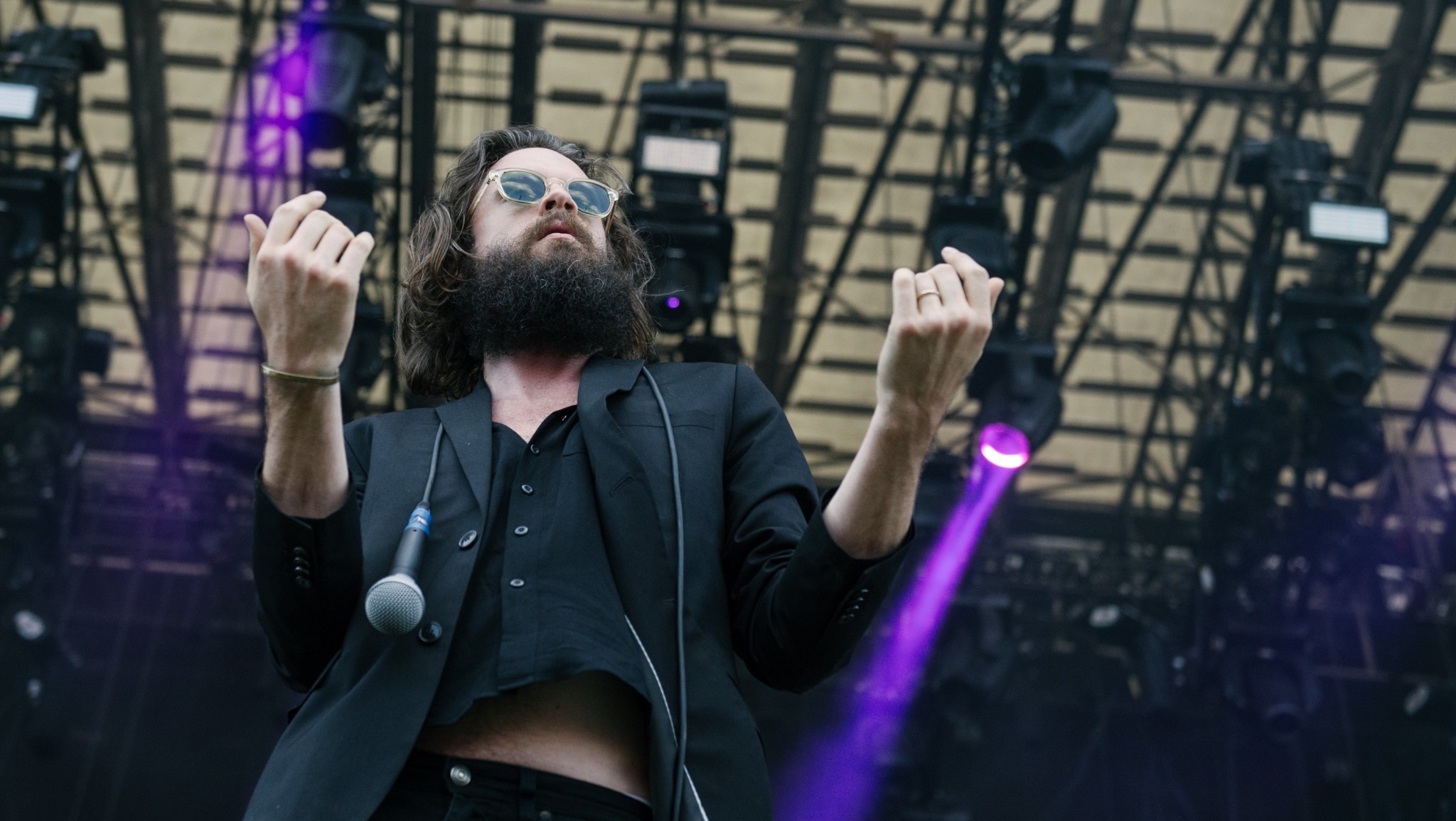 Father John Misty found himself, partially, through banter. The man born Josh Tillman 34 years ago on the American Mid-Atlantic coast began transforming from a milquetoast singer-songwriter into the swaggering young don we see in front of us today when he realized he was funny onstage.

“There was some moment where I had to reconcile with the fact that I was better at banter than I was at entertaining with songs,” he told Matt Pinfield in a 2012 interview. “[It] telegraphed against my songwriting in this really violent, inappropriate way. Like, why is this guy being so funny around these tales of woe? I had to really stare that thing in the face and just be like — I cannot do nothing with this information.”

It’s about as dramatic a musical role reversal as you can imagine: from seven albums of hushed, ignored folk to two shining titans of literate rock and roll — 2012’s Fear Fun and 2015’s I Love You, Honeybear — that remind you of the genre’s long-too-dormant potency. As our own swaggering young don Sean Fennessey wrote in his excellent FJM profile from earlier this year, “Misty wasn’t necessarily meant to become this character — a soulful lounge lizard with a heap of vinyl outstacked only by his Philip Roth novels — but a metamorphosis was nevertheless taking hold.”

On Wednesday night at Manhattan’s SummerStage — the lovely if at times a bit too serene venue/outcropping plopped into the bourgier east side of Central Park — Misty kept at it. As a consummate banter professional, however, he made sure to give us all new shit.

“With this next tune,” he said before “When You’re Smiling and Astride Me,” one of the early set list burners, “I’m gonna join the proud lineage of men who come to this park at night to expose themselves to strangers.” Later, after having clambered down into the crowd: “A big thank-you to everyone I just accidentally punched in the face with my pelvis. And my feelings.” Then on to one of his tried-and-true tropes: making fun of #brands. “I’d like to thank my sponsor, Capital One. Anyone max out their Capital One cards buying tickets to this show? They didn’t just send you another card. Those bastards. They don’t want us to live the good life.”

As if rising to the challenge, the crowd got a bit saucy, too. At first seeing the Father John Misty experience trot onstage, one fellow commented dryly, “He hired a band that looks just like him” — sharp suits, no ties, long hair, general insouciance. “Cool.” A kid, stumbling awkwardly through the crowd, muttered, “Excuse me … excuse me,” then defended himself: “I’m only kind of drunk.” After Misty ad-libbed a tender, lone “fuck,” a cheery concertgoer nearby responded in kind: “Beautiful.”

Meanwhile, Misty didn’t need the talk to entertain: He had the moves. He dropped to his knees and crooned; he hopped up on the drum riser to flail; he walked around with the mic in hand, his guitar slung around his back as if he were a bandoleer. At one point, he even tossed it up high in the air for his abiding roadie to expertly grab. And there were all kinds of other little flourishes to keep one entertained. In the canned laughter on “Bored in the USA,” there was a fearful thrill. On his jealous-lover ode “Nothing Good Ever Happens at the Goddamn Thirsty Crow,” he reminds you to wonder: How, exactly, does one pull off the bedroom maneuver purportedly known as the Georgia Crawl?

Thankfully, he did keep on chattering, eventually going back to the public-exposure theme and unspooling one strange riff off the crickets — they were cheering him into removing his shirt? It turns out, he tells the crickets, that there are plenty of men in Central Park more willing to disrobe. “They’re wearing trench coats. They’re oily.”

By the end of the set, he’d found himself alone, his acoustic in hand, plucking out “I Went to the Store One Day” — an atypically plaintive, heart-poundingly direct love song — to a perfectly inviting chunk of silence. A rare moment of full-on candor. Fuck. Beautiful.