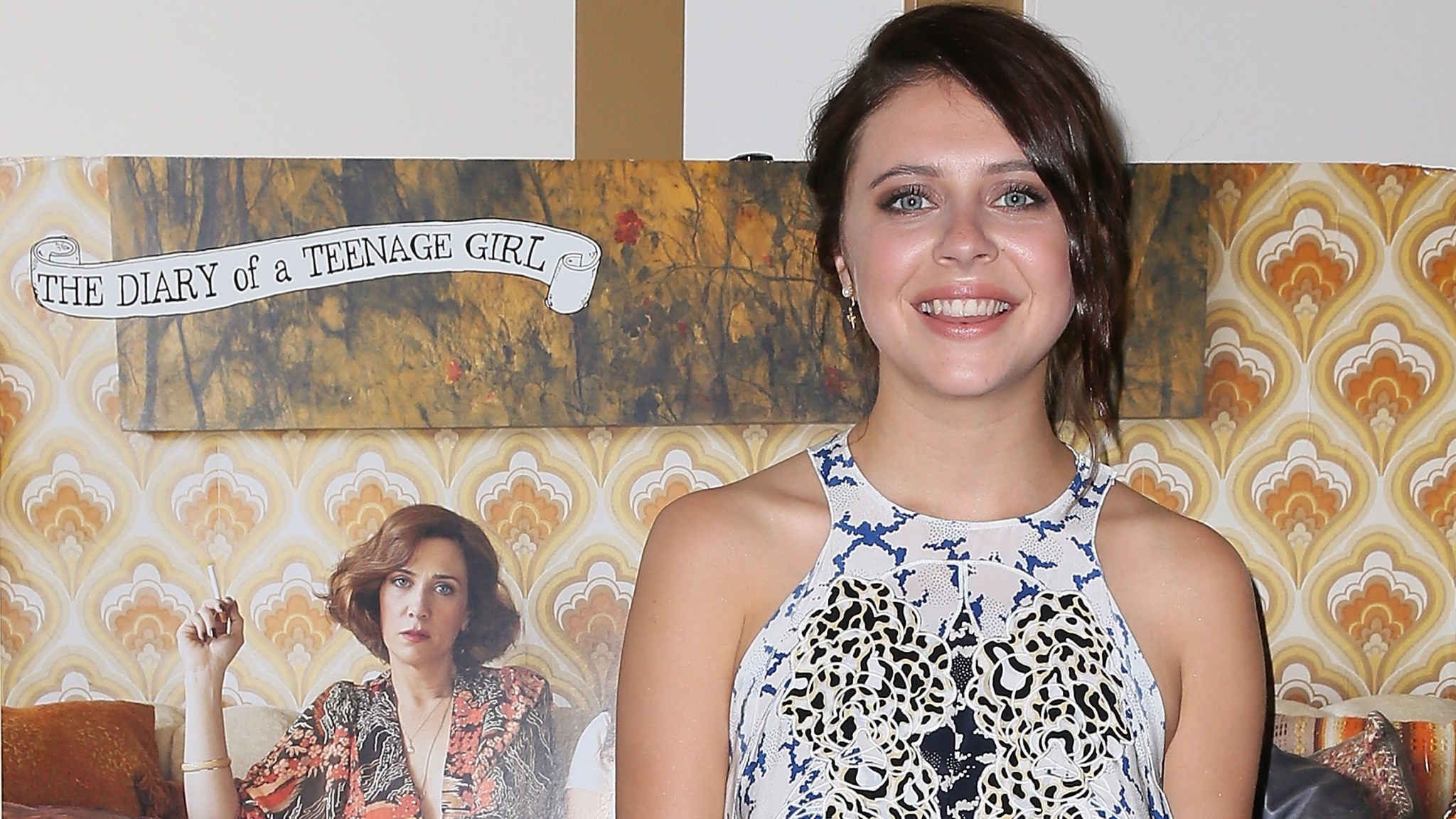 Marielle Heller’s directorial debut, The Diary of a Teenage Girl, casts English actress Bel Powley as Minnie, a libidinous 15-year-old who undergoes a sexual awakening upon losing her virginity to the thirtysomething boyfriend (Alexander Skarsgård) of her mother (Kristen Wiig) in a post-Woodstock San Francisco. Adapted from Phoebe Gloeckner’s graphic novel of the same name, it is the rare coming-of-age story told exclusively from the female perspective.

This is all to say that The Diary of a Teenage Girl is an outlier in the cinema: a film made by women, about women, for women. I spoke with Powley this week about Hollywood’s nagging aversion to depicting realistic, intimate sex from the female perspective, her show business parents, and her latent desire to be prime minister of Great Britain.

As you continue getting more jobs in Hollywood (especially with a project like The Diary of a Teenage Girl), do you get a sense that the industry is still more comfortable making movies about gratuitous violence than intimate sex? That tendency to shy away from people’s sexual experiences?

Yeah, I also think we shy away from sex generally to an extent, but I think for boys at least, you’ve grown up with people making movies about you wanting to have sex. Everything’s really normalized for young men, even if it’s made into a joke, which I’m sure is really frustrating when people are like, “Oh my god, ha-ha, you wanted to have sex with an apple pie!”

Where do you think that stems from?

I think it stems from the patriarchy wanting to keep a lid on female sexuality. I’m not talking about just in Hollywood, I’m talking about just in life. And then in Hollywood, that fact kind of mixed with this Hollywoodized version of a woman, and a woman being so skinny and tan and sexy and passive all the time. It’s just a disaster for young women growing up. It takes us so long to learn to love ourselves, and to accept yourself for who you are, because you’re constantly bombarded with these Kendall Jenners and Cara Delevingnes and whoever is that chick of the moment. And you’re like, “Why aren’t I like that?”

Did you have those worries in your upbringing?

Yeah, it’s easy for me to admit I definitely did not love my body or my face until like three years ago, until I was 20. It took me a long time. Where you’re like, “Oh, right, I have to live in this skin for the rest of my life, I better learn to deal with it.”

And I think this movie supports that. Did Minnie’s sexual awakening parallel with your experiences growing up?

I’m not going to talk too much about the sex I had when I was a kid, but yeah, it definitely did. I think the one thing I related to implicitly, which pretty much is me, is the way Minnie’s brain and her heart works. I think when you’re a teenager, what you feel emotionally is very specific to being a teenager. Something to do with hormones or some shit. You’re so irrational, everything is so much on the surface. You oscillate between so many emotions at one time. Everything feels so extreme. Someone touches your tit and you’re like, “Oh my god, maybe I’m in love with them!” You confuse sex and love and you get broken up with and you think you’re going to die. Do you know what I mean?

Everything feels like a matter of life and death. That was high school.

Exactly. Me too. That’s what I mean. That’s universal. Everyone feels like that. That’s something I related to implicitly. I think I also had that thing that Minnie has: When I became a sexual being, there were a few years in my life where I needed sex and I needed to be touched in order to feel like a whole person and in order to feel like I was accepted. It’s that very negative thing that women have where they feel like they need male attention to feel like you’re accepted as a woman in a friendship group or society or whatever. So it was definitely overcoming and realizing that that wasn’t necessarily true. And also growing up as a woman, you feel much more alone in your sexuality because it’s not something we talk about. I remember hearing boys in school talk about and make wanking jokes. All talk about masturbating and stuff.

Because women pretend they don’t do it, which is weird, and then it makes you feel like a freak if you do do it.

Everyone has their own take on sex scenes. How was your experience?

I’m simulating sex in a room full of people [I] don’t know — wearing like three Band-Aids, that’s it.

Some actors describe getting turned on by these scenes.

Oh my god. Like, I’m not a boy, but I cannot imagine getting an erection during a sex scene. You’re still shooting a movie, you’ve still got someone coming and going, “Oh, let’s test the light next to your face, and could you move your left nipple like three centimeters to the right?” Obviously there was that weird aspect of simulating sex in front of people I don’t know, but also I felt very comforted that the sex we were trying to portray was through a female lens — Minnie’s point of view. And also, it’s not this Hollywood version of sex, which is always really hot and steamy and everyone looks so good. It’s like, no, sex most of the time can be really awkward and you can get in funny positions, and you don’t look amazing. So, I felt really comforted by the fact that this was meant to look really normal.

Was that the goal on set?

Everyone knew that. The director of photography actually said to me very early on in filming, “By the way, you’re not going to look, like, super hot in this movie. You’re not going to look really good.” It’s damaging to young people to present these fake people onscreen, because it doesn’t represent a real person.

Being at the relative start of your film career, where do you want to go?

I’m so open to different things. The only thing I’d say is I’ve set the bar pretty high in terms of good female roles with Diary, and I want to continue in that vein. I’m not saying I only want to work with female directors. But I want to continue to work with emerging female directors. I also want to just play 3-D, fleshed-out female roles, and that sounds like not much to ask, but it actually is a lot to ask in Hollywood. So many times you get sent scripts where it’s like the token chick, where the woman is just there to serve the man in the film. Or it’s tied up with a bow at the end, where they end up together.

I just did this movie called Detour, which is by this English director called Chris Smith. It’s an American film, though, and I play a stripper in it, who isn’t necessarily a strong female — she’s still a victim in some ways — but the character is well rounded and fleshed out. And in the first draft of that movie they wanted my character to end up with Tye Sheridan’s character, and there was no reason for it. And I said to the director, who’s also the writer, there’s no point [to have this] in this movie.

Do you think audiences actually want the happy ending? Hollywood’s rationale always seems to be, “We do it because that’s what the people want.”

I don’t know, that’s a good question. It’s not what I want.

[Diary] has done well at festivals; hopefully it has mass appeal.

It got rated 181 in the U.K., which was really awful. We thought it was going to be the other way around. We thought it would definitely get rated a 15, and we thought maybe here it would be an NC-17. So, I don’t know.

You have to understand that they rated The King’s Speech R here.

Considering your father’s an actor and your mother is a casting director/writer, people often assume you were born into Hollywood.

[Laughs.] It annoys me when people assume that because my parents were in show business that I’m some “show business child” — that I was, like, always going to do this.

Geeky in what way?

I was like really academic and kind of precocious, and was really good at math — I did it at a very high level. I wanted to go to Oxford or Cambridge. I wanted to be prime minster.

Maybe it still is!

Sam Fragoso (@SamFragoso) is a writer and editor whose work has appeared in The Atlantic, Vanity Fair, Playboy, NPR, and elsewhere. A book of his interviews with emerging filmmakers, Talk Easy, will be published by The Critical Press in 2016.