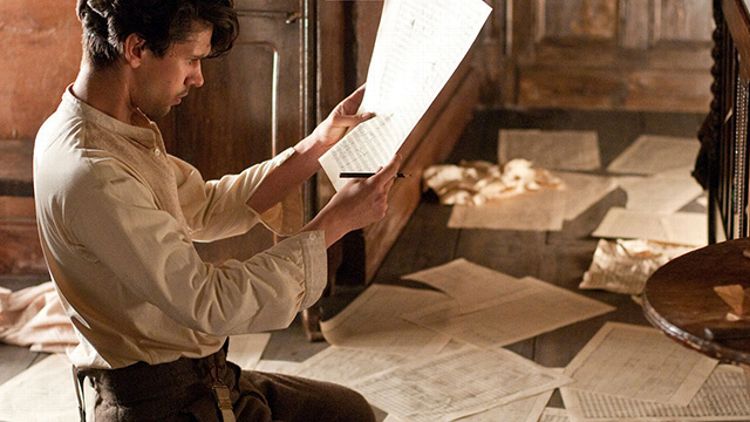 Much has been made of David Mitchell’s initial assessment that Cloud Atlas, his acclaimed time- and genre-hopping 2004 novel, was unfilmable. He could also have said, with equal confidence, that it was unrecordable.

Adapting Cloud Atlas to the screen presented directors Tom Tykwer and Andy and Lana Wachowski with challenges ranging from the practical (how to depict 19th-century Polynesia as convincingly as 22nd-century Korea; how to make Halle Berry look white) to the metaphysical (how to convey the everything-is-connected grandeur of it all). But the difficulty wasn’t just a question of re-creating Mitchell’s phantasmagorical images. One of the most daunting challenges concerned one crucial piece of music, which plays a central role in Mitchell’s novel. The task fell to the composing triumvirate of Reinhold Heil, Johnny Klimek, and Tykwer himself, an accomplished pianist who has co-written the scores of most of his films.

The book’s title is a reference to the Cloud Atlas Sextet, written by a fictional, young 1930s composer named Robert Frobisher, the protagonist of one of six loosely connected narratives that make up the novel. Frobisher’s story is told through a series of letters to his lover back home. To believe him — and one wonders if one should — the Cloud Atlas Sextet is one of the greatest pieces of music ever written. “When it’s finished, there’ll be nothing left in me,” Frobisher writes. “It’s an incomparable creation … Will never write anything one-hundredth as good. Wish I were being immodest but I’m not.”

Such a masterpiece is more easily described than composed, as Tykwer & Co. discovered.

Mitchell, who pens opera librettos in his spare time, writes passionately and elaborately about classical music. “Considering that he is not a musician himself,” the German-born Tykwer told Grantland, “at least not a professional, it’s really impressive the way David has sunk his teeth and his emotional perspective into the world of music and the creation of music.”

Here’s how Mitchell (as Frobisher) analyzes the sextet:

Echoes of Scriabin’s White Mass, Stravinsky’s lost footprints, chromatics of the more lunar Debussy, but the truth is I don’t know where it came from. Waking dream.

In his more detailed breakdown of the piece’s structure — which follows that of the book itself — it becomes clear the sextet is a mirror for the novel.

Spent the fortnight gone in the music room, reworking my year’s fragments into a “sextet for overlapping soloists”: piano, clarinet, ‘cello, flute, oboe, and violin, each in its own language of key, scale, and color. In the first set, each solo is interrupted by its successor: in the second, each interruption is recontinued, in order. Revolutionary or gimmicky? Shan’t know until it’s finished, and by then it’ll be too late.

A couple of factors took some of the pressure off the composers. First, Frobisher may be a gifted composer, but he’s also a megalomaniac, so some of the superlatives can be dismissed as braggadocio. “We were kind of holding on to that thought that he’s slightly delusional,” says Tykwer. “Otherwise it would have been an impossible task.”

Second, Mitchell admits his writing was far from sacrosanct. As he told The Guardian: “I don’t know my musicological stuff — my fictitious composer’s knowledge had been cribbed from essays in CD booklets.”

And so the composers allowed themselves to approach the source material in the same way the directors did to make the novel filmable: by making a series of bold but necessary alterations. Tykwer told us that he and his team tried initially to match the original instrumentation Mitchell prescribed: “We actually recorded stuff with it and it wasn’t very satisfying for the film. By itself it was kind of interesting, but it didn’t really work in the score.”

In the end, they scored the Cloud Atlas theme — which Tykwer describes as “Debussy-ish” — several different ways. Just as Tom Hanks, Halle Berry, Hugh Grant, et al. play a multitude of characters, the theme goes through a series of reincarnations.

“We looked at the Sextet, ultimately, as a character next to the characters of people.”

The theme is interpreted six times. Tykwer is giddy at the chance to enumerate them: (1) Frobisher’s initial piano performance, (2) a symphony, (3) a rendition by a jazz sextet, (4) nursing-home Muzak, (5) futuristic Korean street music, (6) a solemn hymn sung by a hoard of clones.

Julian Sancton (@jsancton) is a writer living in New York. He has contributed to Vanity Fair, Esquire, Bloomberg Businessweek, and Playboy, among other publications.