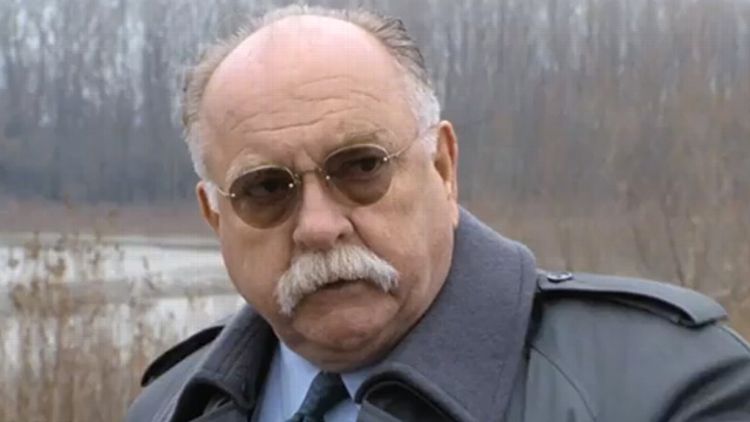 The fall 2013 movie season is enamored with space, sure, but it’s also significantly preoccupied with delightfully rambunctious old people. The Jackass crew brings us the prankful Bad Grandpa this Friday, and next week a bunch of revered film actors team up to get handsomely paid and engage in some geriatric naughtiness in Last Vegas. Old people getting into trouble, especially the kind of trouble society commonly deems as age appropriate, is a time-honored narrative trope, so we thought we’d dive into the archives and find our favorite examples for this week’s Hall of Fame. Caution: multiple Brimleys ahead.

Bryan Curtis: Question for the under-thirties in the audience: Do you know who Wilford Brimley is? I didn’t think so. Let me explain. If you were a child of the ’80s, Brimley was a kind of national grandpa figure, offering America a Werther’s Original in such fare as Cocoon, Our House, and Ewoks: The Battle for Endor. He was Jean-Claude Van Damme’s Cajun helper in Hard Target. These days, you can see him talking about his diabetes on daytime TV.

For one brief, wonderful moment, Brimley went bad. It was in The Firm, which featured so many name actors that it also turned Hal Holbrook bad. Brimley played a character named William Devasher, who handled security for the firm. In other words, he did naughties to keep the mob-controlled lawyers under his thumb. Here, he shows Tom Cruise some pictures of Cruise having an affair. I’ll never forget Brimley’s words: “Not just screwin’, Mitch. The kind of … intimate acts, oral and whatnot, that can be particularly hard for a trusting young wife to forgive and impossible to forget.” The first sign Brimley had turned heel was the dark glasses.

I learned today that Brimley was only 59 years old when The Firm was released. We liked our bad grandpas young back then.

netw3rk: In the 1980s, Olds were so hot, y’all. Ronald Reagan was in the White House struggling with the early stages of Alzheimer’s; the Golden Girls were thanking America for being their friends; and the Old Pack of Hume Cronyn and Jessica Tandy (CroTan), Don Ameche, and Wilford “Diebeetus” Brimley were making big-budget Hollywood movies. Fun fact about Brimley: At the age of 6 he turned 52, because he’s half-walrus and that’s how they age. Cocoon was the story of a bunch of Florida pensioners who break into a pool that’s actually a storage facility for alien cocoons with incredible regenerative powers. Reinvigorated by swimming with these stony alien testicles, our cast of Olds has parties, gets into fights, and uses terms like “blue steel” to describe their boners. Wait, where are you going?

Mark Lisanti: Maybe I fudged a bit to create an ad hoc Brimley-behaving-badly triple feature, and maybe I didn’t. What’s going on behind the YouTube Hall of Fame curtain is not important.

What’s important is filmmaking. You know how you can tell expert filmmaking? When you pull up a clip called “Blood River — Wilford Brimley’s Feet” and it turns out it’s dubbed into Italian, and you can still follow the story. With no understanding of the language at all, you still learn everything you need to know — Brimley’s relaxing in a bordello tub with his dogs up on the rim, entertaining the staff with his mouth-harp virtuosity while he gets a shave. And then Ricky Schroder bursts in, agitated about something — Silver Spoons residual checks, or that the peach-fuzz on his lip doesn’t yet merit that luxurious suds-and-razor treatment — and sees the horses charging over the hill. Old Brims keeps his cool and sends the boy on his way, rifle in hand. There’s no way he’s getting out of that tub before the ladies finish their work. That’s just basic respect, son.

Jack Palance at the 1992 Academy Awards

Rembert Browne: The only courteous moment in this brawl is Martinez not socking the 72-year-old Zimmer in the face. Instead, he calmly grabbed Zimmer’s head and guided his old, round body to the ground, forcibly. You know better than that, Don. Brawls with pitchers with Jheri curls is no place for a man of your age.

Requiem for a Dream

Emily Yoshida: Ellen Burstyn just wants a little pep in the autumn of her life. Is that so much to ask for? When she’s not delivering jittery Oscar-reel speeches to Secretly Cool Actor Jared Leto that will make you want to call your mother immediately, she’s divvying up greens and blue, pacing in front of the television, and wiping her sweaty palms and taunting the refrigerator — like she’s 22 all over again! Come to think of it, why shouldn’t we let over-sixties do the FDA-approved (in 2000, maybe) equivalent of methamphetamine washed down with a nice strong cup of joe? We should all have the right to live that goal-oriented lifestyle right up to the moment that our hearts and jaws give out. We can do crosswords when we’re dead.

Andy Greenwald: Grandpa! Where’d you learn to swear like that?!?

Chris Ryan: This scene turned me off dentists over the age of 60 for the rest of my life.

Zach Dionne: It can get lonely out here for a Cloud Atlas fan. But even critics of the Wachowskis’ mosaic-style interpretation of David Mitchell’s dazzling novel tended to admit that the Timothy Cavendish part was fun. It’s hard to resist Jim Broadbent as a foolhardy goof, Hugo Weaving in drag as the stocky, violent Nurse Noakes, and a quartet of elderly buddies escaping their nursing home. It’s one of the film’s rare sequences of pure fun. (A longer version, one with the essential bar-fight finale, is unembeddable — find it here.)

Tess Lynch: Isn’t the deal that you get past a certain age and you can do whatever you want within the confines of the law? Isn’t that kind of the reward for getting old? I’m not here to judge. Toast that roach like a young buck would, Elvis. Toast him mean.

Astroturfing: Rendering the Entire Internet Meaningless, One Fake Post at a Time