Astroturfing: Rendering the Entire Internet Meaningless, One Fake Post at a Time 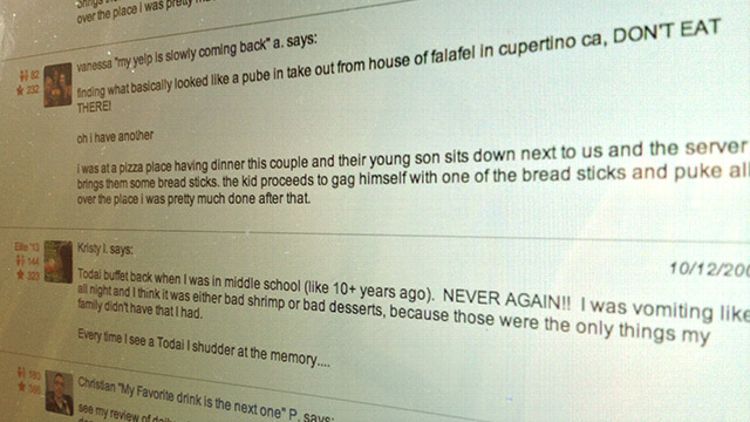 Yelp, besides being a nice place to read porny food prose and find mechanics, is a great website if you feel like becoming a paralyzed, paranoid lump. All you wanted was to choose a place from which to purchase your takeout dinner. You sat down and searched for hamburgers in your area, and then you clicked on the top-rated result. What you should have done was write down the restaurant’s address, get in your car, and drive there, but what you did instead was read a good chunk of 939 reviews; you automatically skipped past the five-star gushers and settled into the one-star stinkers for a critical read. Hmm, this guy spied a roach in the bathroom. That was a deal-breaker for you, as was one woman’s graphic tale about food poisoning. You clicked back and checked out the second-best reviewed restaurant, repeating the actions you took with the first one. You felt a mounting sense of anxiety as the clock crept toward ten, when all of the burger joints except the really scary-sounding ones would close, and then it occurred to you that maybe everyone on Yelp was a liar. Maybe there had been no roach, and no food poisoning, and all you had spent the evening reading were snippets of review wars between neighborhood restaurants, all played out by paid shills, or astroturfers. Then you went into the kitchen and ate a stale cupcake for dinner, confused and broken, the unspent $12 in your pocket a meager substitution for the faith you once had in humanity, which is worth at least $25.

Astroturfing extends beyond Yelp into any corner of the Internet that might alert a person or organization to a potentially reputation-damaging post. On Monday, an excerpt from NPR reporter David Folkenflik’s upcoming book, Murdoch’s World: The Last of the Old Media Empires, was released, detailing Fox News’s comment-thread manipulation of “negative and even neutral” blog items, with Fox News staff creating fake accounts to counter critical articles and engage with the (presumably real) commenters who supported them. They concealed their Fox News–related accounts by using wireless broadband connections, going to great lengths to appear legit even though their comments still smelled a little fishy to the trained eye.

In fact, the more aware you become of astroturfing, the more you’re able to sniff it out wherever you go. Last month, the New York Times reported that 19 companies had been fined a total of $350,000 in penalties by the New York attorney general’s office for posting misleading reviews commissioned by reputation-monitoring firms in an attempt to boost the crowd-sourced ratings. The Times points out that this practice can be much more than annoying when employed by “dentists, lawyers, [and] even an ultrasound clinic,” which is absolutely true; at the same time, astroturfing reminds us of how reliant we’ve become on the opinions of strangers, people who we’ve never met but would never jump to conclude were lying to us. Usually, I don’t find myself feeling like Old Man Yells at Cloud, nostalgically pining for the Internet-less yesteryear, but surely we found places to eat before we could Google the shit out of them. At some indistinct point between churning our own butter and the creation of review aggregators, we still made decisions, visiting different restaurants because people we knew had recommended them or they were situated at a convenient location along our commutes. We entered establishments — a dentist’s office, a manicurist’s salon, a new diner — unarmed with any prior knowledge or prejudices, with steely stomachs and open eyes. And so must we still, because once the power of a loud chorus of anonymous voices was proven to have a direct impact on a business’s credibility and profits, the next logical step was to manipulate that system.

The trouble is, there’s a fine line between people robotically policing the Internet on behalf of the entities who pay them to do so and those who are personally invested in the defenses they type. The Church of Scientology has been known to flood blog posts and message boards with Church-positive comments, using copyright-infringement accusations to prevent Google from indexing websites that criticized it; last July, an Amazon review page for Susan Crawford’s Captive Audience: The Telecom Industry and Monopoly Power in the New Gilded Age was inundated with slams from broadband company shills, all written in a similar vernacular and containing unnecessary biographical information, from accounts lacking real-name verification or from users who hadn’t bothered writing any other reviews (Techdirt noticed that the one-star reviewers of Crawford’s book had, on average, written 1.4 Amazon reviews total, while the five-star reviewers had written an average of 113.9). Astroturfing, when done well, is only obvious when you’re wearing your skeptic’s hat, and donning it means admitting not only that people have different opinions and beliefs — things that stand between you and your ideal dinner, or ultrasound technician — but that everyone is not, in fact, altruistically chipping in to help their fellow humans find the best product or service available. The skeptic’s hat is a hat that reminds you that people can be snakes, which is no fun, plus it ruins your hair and makes you look frazzled and overly suspicious.

Fox News’s thread-bending may have been impressively and dishearteningly stealthy, but it all comes back to the sites that exist solely to consolidate reviews, like Yelp and Citysearch, because as everyone knows, only fools read the comments on anything else. Business owners — like, say, the super-crazy proprietors of Amy’s Baking Company who became infamous after appearing on Kitchen Nightmares last spring — can interpret online criticism as bullying, which has led to claims that Yelp is at the center of an extortion ring attempting to force businesses to purchase advertising from it in order to boost ratings and somehow alter its filter to work in the business’s favor. Though these claims seem to be largely without merit, Yelp itself is a business in need of revenue, so if a disgruntled business owner calls customer service to complain about poor ratings, Yelp may, as a former account executive told Buzzfeed, imply that “buying Yelp ads would solve all their problems.” That’s a far cry from online blackmail, but it certainly doesn’t assuage any fears that the authenticity patrol robots don’t come preprogrammed with their own self-serving agendas.

For the companies that employ astroturfers, reputation management is about much more than protecting a product: They’re attempting to control their image, trying to snatch back their reputations from the unwashed hordes who take their business failures personally. The web tends toward chaos, and any entity that attempts to dominate it and make it a slave is punished, as Walmart was in 2006 when it employed bloggers in a fake grassroots campaign (and again in 2010). For the folks on the ground, many of whom (according to the New York Times) reside in Bangladesh, the Philippines, and Eastern Europe, it means being paid (albeit very little) for fabricating opinions and posting them online, which plays on the blogger’s ultimate fantasy: being paid for what you do for free anyway, morality be damned. And for us, who just want to find a decent Thai place that delivers past eight, astroturfing serves as a reminder that, even online, human impulses are as layered as giant Vidalia onions. Sometimes our actions come from a pure place — like when you sought to drive more business to your friendly local handyman or to dissuade people from visiting a dermatologist who wronged you mightily — but often, they don’t. Sometimes the most surprising thing about our virtual marketplace is how little it has really evolved past its analog state, how we’re still so clumsy in navigating it, and the manic way in which we grant and then revoke our trust. Even when it’s just a hamburger.