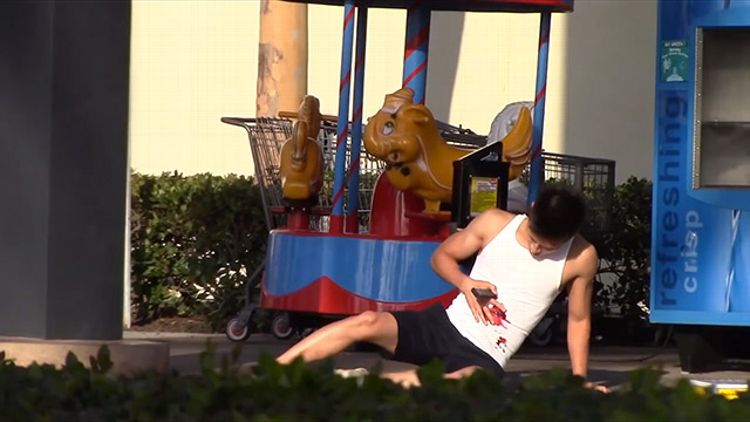 Most Internet pranks can be classified depending on what role you, the viewer, play: You’re either the victim, one of the pranksters, or just a member of the audience. As with offline pranks, there’s an extreme moral spectrum covered here: On one end is the 2001 shark-ladder photo composite, on the other is Tuesday’s stabbing prank, in which a guy named Josh Paler Lin filmed himself getting fake-knifed (he has racked up quite a bit of bad police karma already). Pranks are so well suited to the humor of the Internet that even poorly acted fake pranks get press: Did anyone actually buy the performances in this week’s offering from Roman Atwood (he of the suicide-by-hanging joke), in which he was supposedly outfoxed by his girlfriend after telling her he’d cheated on her? It seems as though anything marketed as a prank is the fanciest kind of click-bait, like a worm that had been stuffed with foie gras.

I’m sure pranking has caveperson roots, but the oldest version of the genre that springs to mind is Candid Camera, which began as a 1940s radio show called Candid Microphone. It moved to a televised format some years later, and in 1961 featured Buster Keaton mildly scandalizing restaurant diners in a proto-Punk’d appearance. Now that we only need a camera phone and the will to freak out other people to broadcast our own amateur stunts, it makes it easier to convince our targets that we’re serious when we, oh, I don’t know, threaten to eat our pet bunnies unless strangers pay us $50,000 not to. Being a good sport when pranked has somehow become tantamount to being a good dude — the joke’s only really on you if you lose your shit.

Even though you’d think that the more victims there were, the more harm would be done, tricks are most palatable when they are pulled en masse, as if the sting of being the butt of the joke dilutes itself when you’re in plentiful company or the effect has been moderated because convincing the world you’ve been stabbed would reverse the punchline. Who could get mad that we’d all been duped into believing that National Geographic‘s photo of the year was a shark about to eat a man on a ladder? Or mad at being mercilessly Rickrolled? It feels like a present, because you’ve been included in a phenomenon. How many people believed that lonelygirl15, a fictional YouTube series that was initially presented as nonfictional video blogs, was the real deal? I have vague memories of following a person named Tara Michelle on Tumblr in 2008, a pretty girl who eventually entered into a publicly blogged relationship with another user I tracked, and then discovering she was fake. This wasn’t a prank so much as it was catfishing, but there was a collective sentiment that we had all been hoaxed together. We harbored no malice (though we did watch, rapt, as the apologies and “I should have known better” posts started rolling in), because we had safety in numbers. You, alone, were not the stupid person. Everyone had been the stupid person, and in the end, the figure behind Tara Michelle was motivated not by an attempt at humor or viral fame, but by a need to appear as someone other than she was. Sometimes we’re a little upset at being duped — like when Reddit fought back against a stunt pulled by a professor at George Mason University that, in retrospect, was probably noteworthy in exposing our own gullibility — but, for the most part, the fallout is less dramatic when it’s spread out. The more people who are creeped out by the cost-benefit economics of what they’re doing, the less likely a prank is to succeed.

Being just one individual in a prank mob removes the element of surprise and the promise of glory, but it’s certainly empowering. There’s Vote for the Worst, which until this past June sought to boost the, uh, underdogs in competitions like American Idol and America’s Got Talent to the upper echelons of whatever competition they were starring on; the time we collectively sent Pitbull to Alaska; and when we ribbed the White House until they made a Star Wars joke. My personal favorite was when 4chan and/or Reddit forced Mountain Dew to withdraw a crowd-sourced contest to name its new green flavor after the top contenders were called “Diabeetus,” “Grannies Squirt,” and “Hitler did nothing wrong.” The more accountability is shared, the more the joke becomes a spectacle, and it’s easier to get the multitudes onboard with something that’s far safer than pretending to get attacked by a stranger in public.

Watching a prank is different, though by no means is it always bad. Jimmy Kimmel’s annual Halloween prank, which asks viewers to upload videos of their children reacting to the news that their parents have eaten all of their candy, invoked the concern of psychologists but racked up a ton of page views. The majority consensus seemed to be that there was no harm done since the candy was returned to its rightful owners, and that, for crying out loud, it was just candy to begin with. Watching people prank their friends or family — take Nathan Fielder’s emceeing of Twitter trickery, for example — is both fun and dangerous. There’s no doubt that some of the responses are fake, but many of them seem genuine and are genuinely funny. Still, the medium is inherently chaotic, and in Stabby Lin’s case requires entrusting a stranger to not push things too far. But one of the symptoms of the prank bug is not knowing when you’ve gone too far until you’re already there. A good prank is dramatic, and whether it’s being pulled by a layman or a professional production company, there’s always the possibility that it will leave you laughless and icky-feeling.

The difference between a funny prank and a teary-eyed “Why did you do that to me?” failure is very small. In 2012, those of us who watched Real World: St. Thomas (terrible season; skip it) witnessed a housemate putting a dead, stinking fish into another’s bathtub. Real World seems to have a clause built into it that its cast must perform a certain number of pranks per season, but this one was the worst I can remember. Being within five feet of the fish carcass made people dry heave, and disposing of it required Marie, the genius behind the whole thing, to put it back in the ocean where she’d found it. It was pointless and only resulted in suffering; it had been a failure in every respect. If you happened to find yourself tuned in at that moment, you put your head in your hands. The whole world had been rendered unfunny.

There’s always a good joke to be made at someone’s expense on the Internet, and if you’re funny, you will be rewarded for it. Nobody wants to be a poor sport — it’s the definition of butthurt, and why we all pretend not to read the comments. That’s part of what makes the web enjoyable — the back and forth, the constantly shifting power dynamics, and the hoodwinking. We know not to trust what we see on here, because to do that would mean trusting people like ourselves who admire the Internet’s inherent humor. What we haven’t decided on is a code of responsibility that weighs real-life outcomes against attention measured in page clicks, and what differentiates something of quality from something sensational. It’s not always clear why an item rises to the top of the heap.

Pranks are momentary lies that suspend us for as long as they play out before giving us the relief with a dramatic fall: It was only a joke. Their lifespans are perfect for YouTube and Twitter, where briefer is usually better. They play on our subconscious fear that we are constantly being duped by our main information source, and that every person we interact with virtually is a liar with a stock photo avatar, but there’s something timeless about them as well (Buster Keaton!). Sometimes our sillies have serious repercussions, but for the most part their effects fall into a decidedly gray area. We want to take each other at face value even though we know our trust is often misspent, all the while circling around a perennial brain-warper: How much of this was actually just a joke, all along, or could be made into a joke later? All of it? We’re still figuring that out, but don’t think too hard on it. Here: Think about the spider instead.

The Purge 2 Is Coming. Now Please Address Each of These Unanswered Questions.