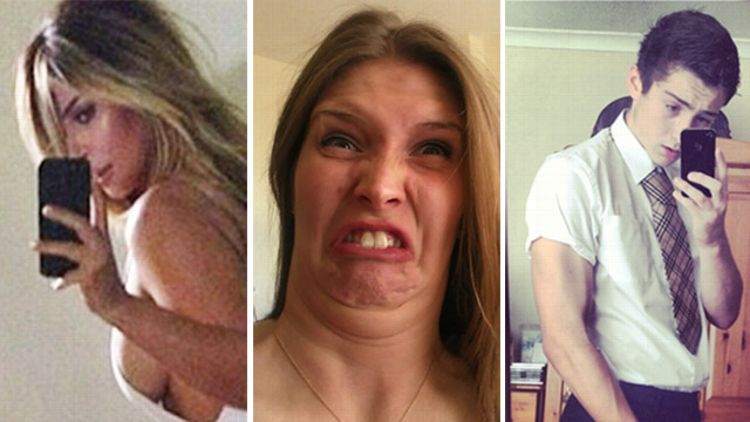 Yesterday was the Internet’s 44th birthday. Here’s lookin’ at you, Internet, which also entails lookin’ at ourselves. In the past two weeks, we’ve considered the selfie from various flattering, filtered angles: the Tumblr “Selfies at Funerals” was born; duck face was dethroned by “sparrow face”; a performance artist streaked across Lyon posting disembodied selfies, and a London art fair hosted an all-selfie exhibition. Considering the selfie (grandpa, it’s a digital self-portrait) is, literally, like stepping into a hall of mirrors. There is baggage associated with taking a photograph of yourself, an acknowledgement of your own narcissism softened by the knowledge that that kind of narcissism is a universal impulse. Babies love mirrors, and then they grow up to love selfies, if only privately. Being confronted with your own image and then manipulating it into something better and softer, messing with the focus and taking as many shots as you feel like, is somehow empowering. If life could be manipulated in the same way modern selfies are, you would exist as only the most beautiful version of yourself and your surroundings would be completely within your control. Messes are cropped, kittens are wrangled, lip gloss is lacquered. You can apply order to your universe and yourself.

In the 1900s, the Kodak Brownie box introduced the world to selfie capability for the first time, but the genesis of the popular auto-portrait is generally considered to be the Myspace pics of the early aughts. They weren’t particularly fancy, because our phones were made of cardboard and pipe cleaners back then, but we were able to share them judiciously. They were a big step in our evolution toward self-conscious branding, despite how toothpaste-speckled they made your bathroom mirror look when the flash hit it, because they represented pictures taken solely for the purpose of public sharing. There’s something innately intimate about the selfie and the implication of being alone with an invisible audience whose numbers and temperaments you can’t gauge. Selfies are ballsy: They’ll either wind up as a performance for a full house or an empty one, but either way you’re on stage mugging away, asking for people to like your face.

As I mentioned, babies love faces, their own included. But what babies really love, according to a University of Exeter study, is beautiful faces. They dig symmetry, as do we, so most selfies are chosen for posting based on their virtues, not their flaws. Ugly Selfies took hold on Reddit and in body-acceptance circles, providing a nice haven of perspective on our obsession with presenting our most attractive selves in our self-portraits, but the majority of auto-photographers prefer to appear attractive, even if they have to alter their photos (consider the app Photo Makeover, which uses “cosmetic magic to change facial features and adjust facial expressions with just a few swipes”).

“Duck face,” a close cousin of baby fish mouth, swept the nation during Myspace’s heyday, though you might remember it getting some earlier play on an episode of Full House. Duck face is a pursed-lip expression that, once identified as a trend, became the marker of a lame-duck novice. It wasn’t particularly becoming, but obviously we all have a secret, innate fear of looking like Fire Marshall Bill. In our minds, we had to compensate for our hideous liplessness with an affectation. Sparrow face, its fowl friend and heir, requires the same plump pout as duck face but insists that you bug out your eyes and part your lips as though you are a sparrow defending its turf. It resembles a person surprised by the doorbell late at night: a mixture of shock, disdain, and eagerness, like you’ve been called to action just before you washed your face and got into bed. You look like you’re about to be hit with a rhythm stick: go ahead, look at me, but be gentle.

You can sparrow face at a funeral (“After funeral selfie LMAO”), or you can crop off your head and still manage to include your dearly beloved’s corpse in the shot. Which of those you choose depends on your level of personal awareness. It isn’t easy to elevate the selfie, so, to use my least-favorite phrase, “it is what it is,” and though the Lyon selfie-streaker Xavier Cha’s performance piece comes with a highbrow artist’s statement (“I am no form, no structure, intersecting every direction at once, grotesquely flipping inside out over and over again”), it’s only illuminating something we’re already intuitively aware of. We’re seeking validation in all of its forms — sexual, social, cultural — when we disseminate pictures of ourselves. Between the Kodak Brownie self-portraits and Myspace, I remember having an anxiety attack while eating a microwaved bagel in high school. I floated above myself and looked down at the top of my head and realized I had no idea what my face looked like, and that I might never have any idea what my face looked like. It was a terrible thought. I did not finish that microwaved bagel, though it was piping hot. The selfie is an attempt to fill the gap between your real self and the one you project, to lasso all those war wounds and lopsided grins into something better with swoopy hair. It’s also reassurance that you’re inhabiting yourself, that you’re still there. (Even if where you are is at a wake.)

This summer, the pope partook in the first papal selfie. It’s not the best shot of the “hipster pope,” but the selfie itself(ie) invokes almost religious themes. You examine your flaws, identify them, and atone. You try again. You offer up what you’ve got for judgment, and hope that you’re still loved. Thinking too much about yourself has dire consequences, like when you forget that you’re supposed to be looking at Beyoncé instead, and what’s the real value in sculpting your avatar anyway? Every so often, though, you just have to make sure you are who you think you are — and whether you’re framing it as performance art or ironic or genuine, the sentiment is the same. Am I OK? Yes, I think so. It looks that way.

The Best Horror Movie of the Year Is an Insane, Micro-Budgeted 29-Minute Story About an Indonesian Cult