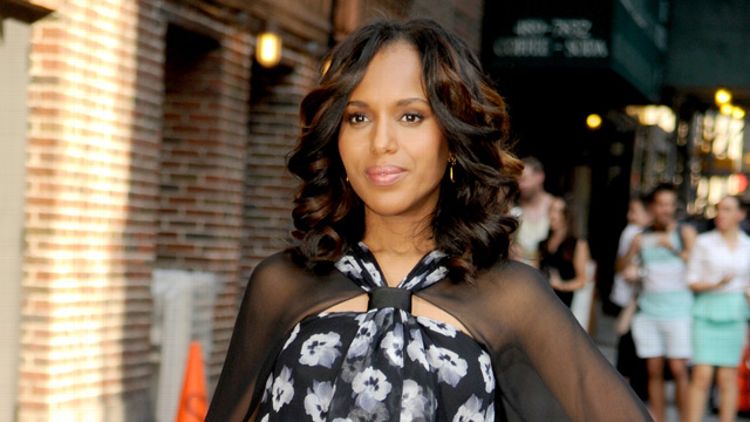 Kerry Washington Is Pregnant: “For the past several months, the Scandal It girl, 36, has been relying on a seamstress to help her conceal a huge secret: Multiple sources tell Us she and NFL Pro husband Nnamdi Asomugha are expecting!” A friend says Kerry is “about four months along,” and just like her secret engagement and wedding, she has no plans to publicize the pregnancy. How will Scandal deal with the pregnancy? Either by writing it in or choosing to “just work around it.”

“Lack of ambition. I can’t deal when someone dillydallies through life. You’ve got to have drive.” —Katy Perry

“If people aren’t nice or try to act like a-holes to be cool.” — Emma Roberts

“A guy who sits around and plays video games and smokes pot.” —Emily VanCamp

“Nobody likes tardy people. And I always say, ‘If a girl, like, spits, that’s gross!” —Harry Styles

Kristin Chenoweth on Southern Shade: “If you say ‘Bless her heart’ after you’ve done the insult, it negates it, like having a Diet Coke and a muffin.”

Misc/Etc: “The boys aren’t hugging it out just yet” “told his wife about the illicit images and was promptly kicked out of the L.A. home they share” “Mary thought it was just a rut. This is devastating.” “I am severely allergic to bees” “Michael Landon drove me to the hospital” “She uses so many emojis” “I wish I were a Muppet” “I was in a full-on standoff fight with my pet pig” “Too broke for him to get a vasectomy” “All I remember is there was a woman, there was some shaving cream” “We’re overspiced” “cozied up to koalas” “They sniff candles!” “Babies eat mostly salsa”

Lindsay Lohan Is Drinking Again: “Oprah might want to stop payment on her $2 million check to Lindsay Lohan. Despite her being out of court-ordered rehab for just three months — and repeatedly declaring that she’s serious about her sobriety as well as filming a tell-all documentary about her own sobriety for OWN — Star can reveal that Lindsay has fallen off the wagon in a major way.” Lohan was spotted at two different bars in New York, where she “downed several vodka drinks” at each. She returned to L.A., “where her partying got more serious.” She went to a party in Hollywood that Paris Hilton and Miley Cyrus were also at. “Lindsay arrived around 3 a.m. and was still there when dawn was breaking.” An eyewitness says that “Lindsay, Miley and Paris were taken to a special room for VIPs. There were lines of cocaine on the table — it was a free-for-all.” Hey, Miley hates coke because it makes parties get dark and creepy, according to Miley in Rolling Stone. “This came just days before a photo emerged of a disheveled Lindsay reaching for a wine bottle at another L.A. party” and the news that Lindsay has dismissed the sober coach she had been partnered with after her most recent rehab stint. Lohan’s rep claims the picture was taken at a misleading angle, but insiders say “Lindsay looked intoxicated at the illicit bash. She was definitely drinking alcohol. She got increasingly sloppy as the hours went on. At one point Lindsay was literally hanging on to a couple of her friends, like they were holding her up.” Sigh, that is sad.

Kelly Osbourne Off the Wagon and Cheating on Her Boyfriend: Kelly “committed the ultimate faux pas when, during a drunken bash with friends, she was busted by her fiancé while making out with another man!” The incident took place at Beacher’s Madhouse, the Hollywood club where everything sketchy seems to occur. Kelly, who has been supposedly sober for a while, “threw back cocktails” for her 29th birthday, with fiancé Matthew Mosshart in tow. “They had bottle service, with two bottles of Grey Goose, and she was drinking a mixed vodka cocktail.” Once tipsy, she hit the dance floor and met a random guy. “They were talking and giggling with each other — and then the next thing you know, she was nuzzling and kissing him.” Mosshart caught wind and “flipped,” pulling Kelly off the dude and yelling at her. “He then grabbed her arm and they left the club without even saying good-bye to any of their friends.” Nobody even knew Kelly had bolted until the club wheeled out her birthday cake, and “the guest of honor was nowhere to be found.” Osbourne has been to rehab four times, and there is a history of chemical dependency in her family. She “first fell off the wagon last year by getting drunk on a cross-country fight — and Kelly has since copped to drinking alcohol while avoiding other drugs.” Her birthday disaster may spur some soul-searching.

Taylor Swift & Katie Holmes & Alexander Skarsgard: “Taylor Swift is at it again! After recently stating that when it comes to dating she should ‘sit it out for a while,’ the 23-year-old already changed her tune, because she has her eye on True Blood star Alexander Skarsgard. The two, who are currently filming The Giver in South Africa, have become close on set, but Taylor has some major competition: fellow costar Katie Holmes!” I thought Katie Holmes was hitting it with Jamie Foxx. “Film insiders say that both women are vying to win over the 37-year-old Swedish actor.” Come on, Tay, he may be the right height but he’s way too old for you. “Taylor is like a giddy schoolgirl around Alex,” but Katie is also “very into him.” Team nobody!

Katy Perry’s Modest Makeover a John Mayer Idea? “Katy’s recent makeover from California candy girl to a sophisticated ’90s-esque icon may be long overdue, but it isn’t the result of a woman maturing.” Let’s think about the word “’90s-esque” for just a moment. “Insiders close to the 29-year-old singer say that she and boyfriend John Mayer are mere months from getting engaged, and before John pops the question, he’s making sure to revamp Katy’s look — and her life.” How very Kanye and Kim of them! “The ‘Paper Doll’ singer, 36, recently took Katy to the viewing salon at Chanel in Beverly Hills, where she shelled out more than $100,000 for new clothes, shoes and handbags, all under the direction of John.” That is seriously so Kimye (and also I don’t believe it at all). Mayer “is image obsessed. He likes to be in charge, and she doesn’t question his judgment.”

Ellen DeGeneres & Portia DeRossi on the Rocks? “Ellen’s a jealous control freak and it’s taking a toll on Portia. Portia loves her to death, but she feels like she’s trapped in Ellen’s world and she can’t get out. She’s had it with Ellen’s jealousy and insecurities! There’s even been talk of a separation, but for now, they’re trying to work things out in therapy.” Ellen is super suspicious of her wife. “She always wants to know who Portia is talking to or emailing. If Ellen had her way, she’d have Portia on the set of her talk show every day. Portia has turned down many acting jobs because of Ellen, and that’s caused some major resentment. But Ellen tries to keep her busy with remodeling their homes and buying more properties.”

Misc/Etc: “MOLLY-LOVING MILEY” “a hedonistic poetry professor” “her nonfamous friends are hard partiers too!” “Minus the emergency pee in a water bottle, not a bad day at all” “WTFace” “a witch with a capital B” “BOOTY BATTLE!” “risked a nip slip and a serious wedgie” “They constantly remind her that she’s not on cable, and every time she puts up a dolphin-rape joke or some such off-color sex reference, they’re risking an FCC fine” “a womanizing, booze-fueled bad boy” “Richard Gere was a far cry from his hunky Pretty Woman days” “Cocaine Cowgirl” “He plays selfish billionaire Benjamin Stacks, who changes his ways after befriending an orphan” “Friendly exes or just good actors?” “The perfect pair first met at the gym”

Miley’s Cry for Help: Despite her recent public shock tactics, Miley’s “most shocking reveal in ages came on Oct. 22 in the form of a single haunting Instagram post.” Alongside a lyric from a Lorde song saying “I’ve never felt more alone,” Miley posted a photo of herself “solo and gazing off into the distance.” She’s been self-medicating her depression with “destructive behavior like nonstop partying and random hookups.” Her problem? “She doesn’t have many real friends and is constantly messed up. She never wants to go home, never wants to be alone and doesn’t want the party to end. The way Miley has been acting is a cry for help.” A photocollage makes the argument that “MILEY HOOKS UP WITH 4 GUYS IN 4 WEEKS” because she is “DESPERATE TO BE LOVED” after her engagement to Liam Hemsworth crumbled. “Everybody is worried now that Liam is gone. She’s a mess without him.” Miley claims she’s “having the best time of my life,” but it’s all just a defensive maneuver. “She was so in love with him and took it really hard.”

Blake Shelton: “Someone told me today that I drink like a fish and it really hit me hard and made me think … Do fish really need to drink?!!”

Kanye Is a Groomzilla: “He’s being such a groomzilla. He’s already saying how it will be the event everyone will talk about for years to come.” He wants to pick out Kim’s dress himself, of course, but other than that the details are under wraps. Well, mostly. Sayeth ‘Ye, “I only got two words in my mind … and that’s ‘fighter jets!'” Luckily for both of them, “bowing to Kanye has become second nature to Kim.”

Misc/Etc: “Nobody knows that I sat there the whole time with my dress completely undone” “I could watch her eat for hours on end, even if the food got stuck in her teeth” “adult film star turned author” “I know you’re not a robot because you can’t sing for shit” “Ppl saying I was FAT @ my wedding, u r the worst kind of ppl on the PLANET” “Excuse us while we wipe away the drool” “looks like a human chicken nugget as she steps out in a triangular fur mask” “from boy-bander to metalhead” “He’s not hot!” “Twerk and play!” “The devastatingly handsome leading man. The stunning supermodel.” “spotted throwing herself at Leonardo DiCaprio” “SIN CITY SMUSHING” “put her hands on her face and let out a crazy high-pitched screech”