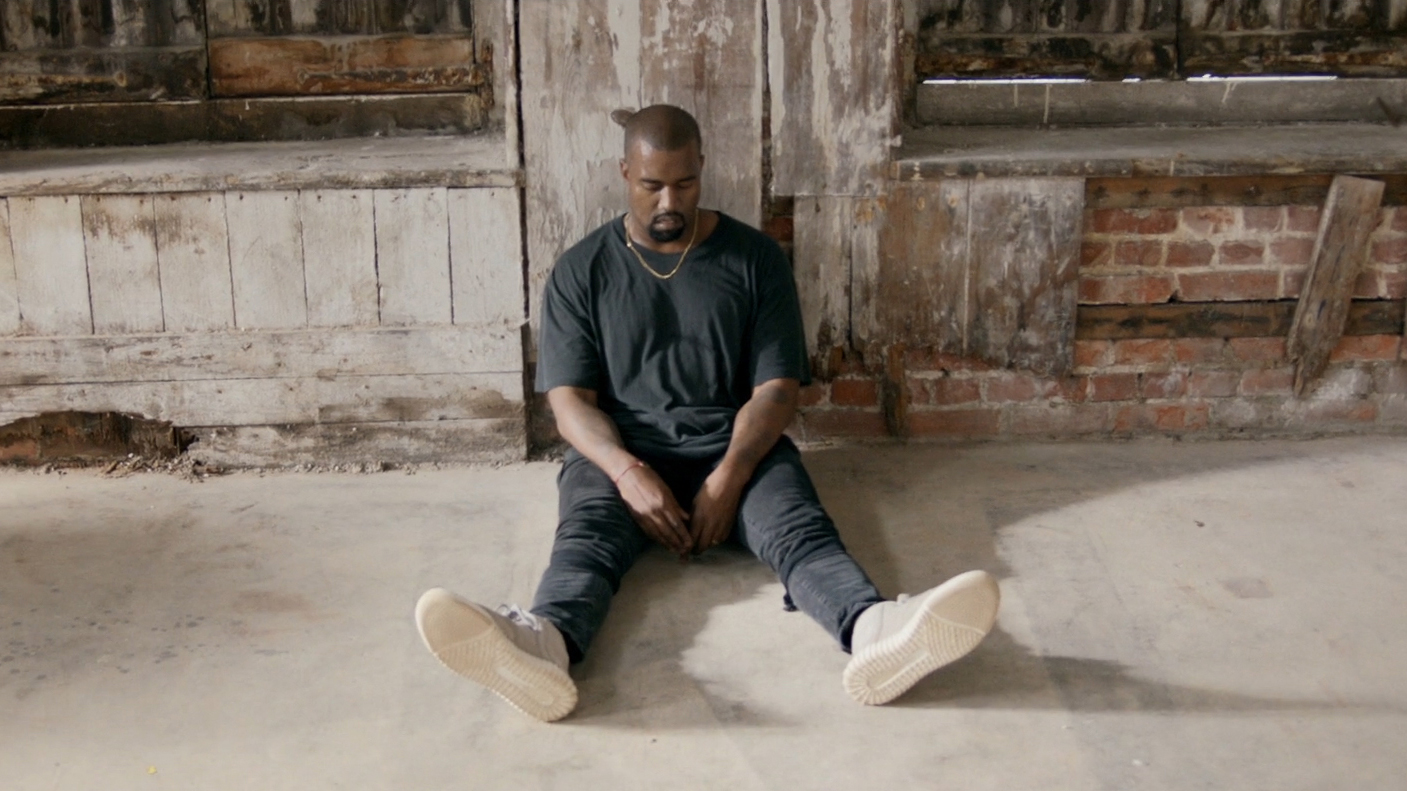 Since Friday evening, an unfamiliar sound has been reverberating across the expansive grounds of the Los Angeles County Museum of Art (LACMA), intruding on the experience of the other exhibits: Kanye West’s voice. A nine-minute video for West’s new songs, “All Day” and “I Feel Like That,” shot in a single take by director Steve McQueen, has been on display in the museum’s BCAM building, and will be until the end of July 28.

Painted on one wall within the exhibit’s space is a description of the video: “play[ing] upon the relationship between the camera and the subject. As in a meeting between the bull and the matador, it remains unclear who chases whom within the arena. The roles of pursuer and pursued are at times inverted.”

So is Kanye the bull or the matador?

The viewer enters the arena before the battle has begun. McQueen opens with a medium close-up of Kanye, looking human — of New York, Chicago, anywhere. He’s motionless, a black man in a black T-shirt, presented against dilapidated white walls. The snapshot doesn’t last long, though. With the sound of Theophilus London’s electric hook, the speakers  — four of them, huge, a unit in each corner of the large room — thud, and the screen shakes; suddenly Kanye is unleashed. He begins rapping, angrily, confronting the camera, his arms swinging and his head nodding, the camera unable to keep up with his aggressive energy.

Meanwhile, Kanye’s rhetorical barbs are cutting, and they’re intensified by the camera’s closeness. He uses the n-word 45 times, forcing the viewer to confront black stereotypes from “How long you n—-s ball?” to “How much time you spent at the mall?” The answer: an emphatic “All day.”

The film becomes dizzying. It was shot in an enclosed dockyard outside of London, the room stripped bare to Yeezy’s liking, but the action is nonstop. With most of the windows boarded, the viewer has no bearings; the film is removed from place — as well as time, though the video has the feel of a not-too-distant dystopia in which everyone wears monochromatic grayscale.

Even within the commotion, it’s hard to miss that the two rooms — the LACMA one in which the audience is standing, and the one in which the video was filmed in London — mirror one another in their sparseness. Within the high white walls of space, there were only the massive speakers and Kanye.

In the LACMA room, Kanye is blown up, projected from the center of the ceiling on a double-sided hanging screen. Viewers clung to the walls like they were riding a Gravitron. “We were kind of pushed up against [the walls] by the bass,” said James Beke, a 24-year-old director with long dreadlocks. “It was definitely uncomfortable to stand there with the visuals and the audio so loud.”

The scene itself could also be unsettling. “It was very Steve McQueen,” said Beke, who, like many of the museum’s patrons, came for the video.1 “I would compare it to one of the scenes in 12 Years a Slave where he’s hanging and they just stick on the scene a little bit too long, and you’re uncomfortable watching him trying not to die. I think the scene is like three minutes long and it’s similar to that.”

The discomfort was almost universally felt. Some, like Maddy, a 21-year-old UCLA student with Padme buns, found the experience sublime. “I think the space showed how confrontational and, like, powerful it is because you had to behold it from a certain distance to kind of take it in, and it kind of pushes you back,” she said. “And you were also forced to confront the other people across the room who were also viewing it at the same time. I was definitely super moved.”

For others, though, the surroundings were so uncomfortable that they couldn’t even make it through “All Day” to experience “I Feel Like That.” Faith Fleury, a retired corporate financier who now makes mixed-media murals, stumbled into the exhibit on a whim. She left, though, after reading the exhibit’s description and watching a minute or so of Kanye’s rapping. “It’s a little bit too loud. But I get what they’re trying to do. It’s just a little too assaultive for me,” she said.

A blonde-haired ball of turquoise (glasses, coat, and shoes), Faith looked like an eighth grade math teacher. “Have you listened to much Kanye?” I asked. “As much as I’d like to,” she said. “I don’t go for hip-hop stuff at all. I find it too assaultive. There are better ways to say the things he has to say.”

A group of men old enough to have gotten down to DJ Kool Herc — but who clearly never did — walked out of the exhibit in a huff. Asked what they thought, one responded in a French accent, simply, “Shit. Absolute shit.” His friend added, “This is the same culture that gave us Thelonious Monk and Charlie Parker, just think about that.”

Really? “I thought it was unprofessional, I’m sorry,” he said.

“Let’s talk about the sound mixing, that the guys who did it did it somewhere else and brought it to a room that has an echo in it. Like that,” he said.

West likely anticipated reactions like these. He’s acutely aware of how he’s viewed in popular culture. That perception is what the film was about; it’s what many of his lyrics are about; it’s why he waved and sat back down when Beck won the Grammy. And when West and McQueen gave a Q&A on Friday following an exclusive surprise sneak peek, Kanye called himself “a bad celebrity, but a pretty good artist.”

Nikki Calabrese, a 43-year-old television showrunner who was attending the installation, disagreed with Kanye’s self-assessment: “I just feel like his music is lazy and he’s more interested in shocking people and being provocative versus being focused on his art.” It should be noted that Calabrese “fucking hate[s] Kanye” and thinks he’s “fucking horrible.”

People who don’t like Kanye West are turned off by his ego, and are further polarized by the proselytizers who call him a genius. For these critics, Kanye’s music is so obscured by his celebrity that it can sound like one long “Haaaan.”

West is a celebrity, but to limit the conversation around him to his celebrity is reductive. There are two sides of Kanye — he is the matador and the bull. You may not like one, or the other, but to truly appreciate or love him is to see him for what he is: a conflicted, complex artist, and a bit of an asshole. The art comes from watching him negotiate these two selves.

This is time and again a lens through which Kanye appears a sympathetic virtuoso. This was never more clear at the LACMA show than when “All Day” transitioned, fairly seamlessly — without a break in the shot, anyway — to “I Feel Like That.”

Kanye turns his back to the camera, and the camera follows him.

While you’re fast asleep, do you experience nervousness or shakiness inside, weakness or dizziness?

The idea that so much can control your thoughts. Lost in your thoughts. Trouble remembering things, feeling easily annoyed and irritated. Afraid of open spaces, going in public.

He sits down, back against the wall, legs out in front of him.

Thoughts of ending your life. Feelings that most people could not be trusted before I had that type of heart, chest pains?

The way Kanye becomes intimate, self-aggrandizing, and raw on “Feels Like That” is not new for hip-hop or for Kanye — great artists have always complemented their swagger with sensitivity. But McQueen’s camera, and perhaps the museum setting, made these qualities more pronounced, literally visible.

For some, Kanye will always be “assaultive,” a truculent rapper without a filter; for others, the juxtaposition between the two songs, presented on two screens as one whole, revealed the simultaneous existence of Kanye the pursuer and Kanye the pursued. Some were able to view Kanye as a victim — of his fame, of his race, of America.

“It did make me want to sit with him for a minute, honestly. I like him in a weird way now,” conceded Calabrese, the showrunner. She saw Kanye as the bull, “the hunted one.”

At the conclusion of “I Feel Like That,” Kanye bows his head, resigned, and the image cuts to black. Some applauded.  It ultimately didn’t matter whether Kanye was the bull or the matador. We were all culpable in allowing this archaic dance to endure; it was a damn good show.