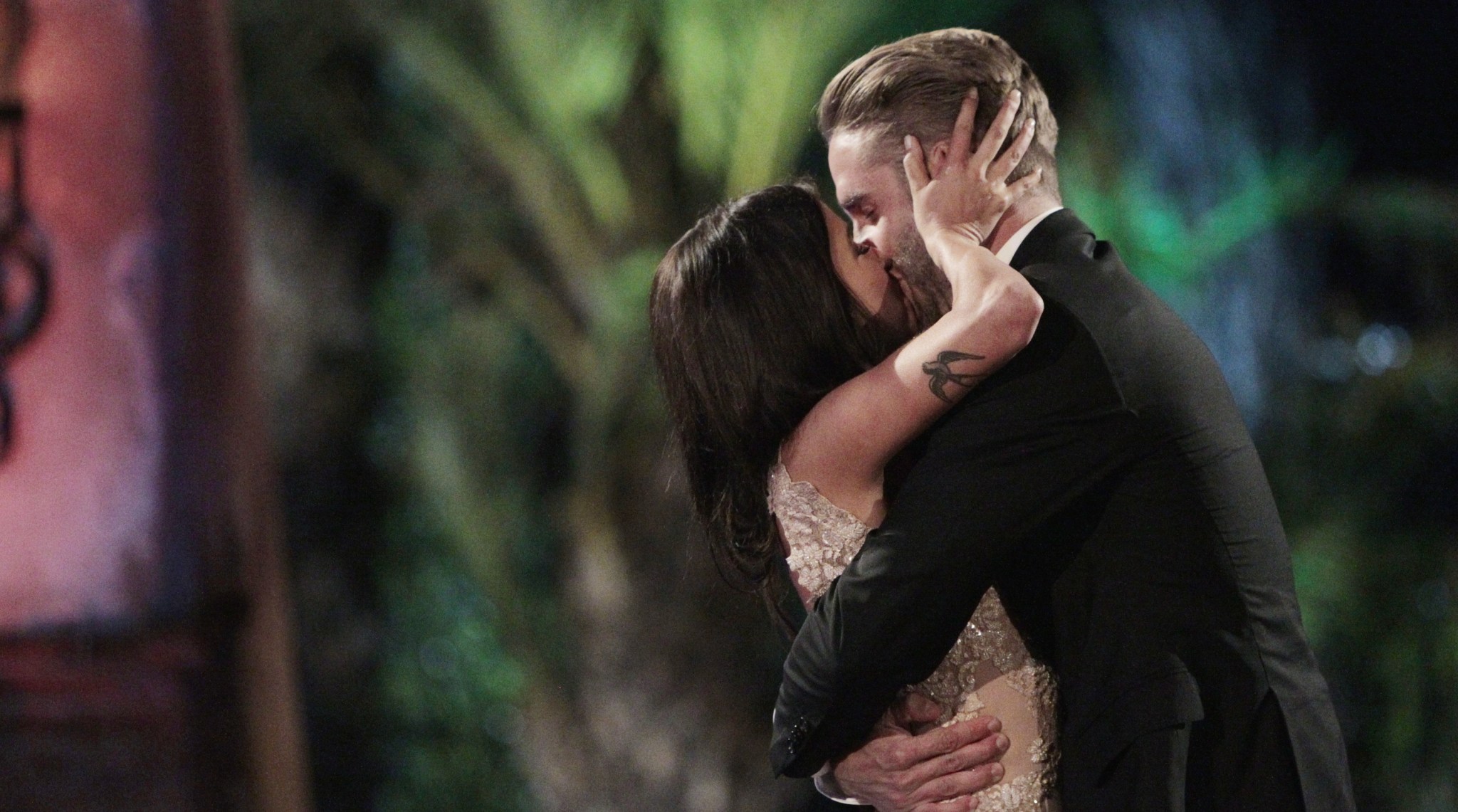 The conclusion to one of the most exciting seasons of The Bachelorette dropped last night. The journey was full of twists, turns, chills, spills, and shocking coitus confirmations. But all good things must come to an end, so we enlisted three of Grantland’s biggest Bachelorette fans — David Jacoby, Mallory Rubin, and Dave Schilling — to share their thoughts on this monumental finale in real time.

Mallory Rubin: (8 p.m. PT) Before we talk about Foreverlove and the choice between Normcore Nick and the Schnoz (credit to Jacoby for all three of those terms), can we discuss how Chris Harrison pronounces “finale”? Seems important.

Dave Schilling: (8:05) Mal, I think it’s worth it for you to consider that maybe YOU have been pronouncing it incorrectly this whole time and Mr. Christopher Harrison is learning you.

Rubin: (8:06) Dave, as usual, you’ve opened my eyes. Speaking of eye-opening: This beard is working for Nick.

Jacoby: (8:07) The appeal of Kaitlyn, Queen of Coitus, GOAT Bachelorette Champion, Breaker of Chains, is unquestionable. Some of her strategy, not so much. Cool, you coitused Normcore Nick off camera. Do you. But why do you tell production? What purpose does that serve? Let’s say you tell production because they have some #unREAL Goldie-type chick shadowing you all day and you can’t help it because you have that “I just slept with someone and I have to tell someone” feeling. Why do you tell Ryan Schnozling? What purpose did that serve? If you end up engaged to him, you have a two-month grace period during which you can slip the information in while the Dodgers game is on, or after he screwed up, or during sex. After that, I just had to question why she told everyone about doing the nasty with Normcore Nick.

Then, when she sits down with her mom, first thing Kaitlyn does is tell her about doing the nasty with Normcore Nick. I love this show.

Schilling: (8:14) There are few things in this world I despise more than the interminable slog of the Bachelor franchise finales. I do my absolute best to be patient and let the three-hour monstrosity wash over me, but any self-respecting Bach-natic knows that these things are not won or lost on the last night. This has been a done deal since hometowns. Or at least since Shawn melted down and revealed himself to be Mark Wahlberg in Fear.

Jacoby: (8:16) Wait, is Nick really going to meet a family of Canadians in a Canadian tuxedo?

Schilling: (8:19) And just as I say that, Nick turns on the waterworks and finishes off Shawn for good. That was the Mortal Kombat fatality of The Bachelorette. FINISH HIM, NICK.

Rubin: (8:21) You’re a dangerous lunatic. The Schnoz is taking this to the bank. He won’t need those manipulative tears to sway Kaitlyn’s family members. (He’ll do that with his biceps.)

Schilling: (8:24) I’m sorry, Mal, but this show is not a test of strength. It’s a battle for emotional supremacy, and for god’s sake look at Nick’s ridiculous puppy-dog eyes and 10-cent smile. Why do you think all those poor schlubs flipped their wigs when Kaitlyn decided to introduce Nasty Nick to the show? Because they know he’s a damn nuclear missile. Your man Shawn is in the blast zone.

Rubin: (8:28) Dave, look how excited she is to see Shawn. LOOK. Don’t deny the inevitable. Also, props to Kaitlyn for being totally chill about sitting down and telling her mom, dad, and stepdad that she boned a dude on national TV. What a woman.

Jacoby: (8:30) Can’t lie, that Shawn and Kaitlyn origin story kind of touched me. I love love.

Schilling: (8:31) Aww, Shawn fell in love with Kaitlyn on The Bachelor … just like America did. Props to Kaitlyn’s mom for calling Shawn out on his jealousy problem. She must have found his ginger-headed Nick voodoo doll in his bedroom.

Kaitlyn would be the worst codefendant. That is legit something you have to consider before proposing. Nothing is off the table.

Rubin: (8:33) Props to Kaitlyn’s mom for calling Shawn “a man” and then making sexy eyes at him as she asked him to step outside. I know her game. Way to be, lady.

Schilling: (8:47) I like to assume that literally everyone on this show is speaking in double entendres at all times.

Schilling: (8:50) I don’t know if this information is readily available on Reality Steve because I avoid spoilers like Britt avoids hot showers, but what is the deal with Nick’s bracelets? Does he ever take them off? Do people call him out on his excessive use of accessories? Did he leave the bracelets on during his national TV sex romp? Does each bracelet represent a season of The Bachelorette he’s been on? This is what I need to know After the Final Rose.

Jacoby: (8:55) I like to think about the time he dedicates to bracelet application every morning. Tying on a bracelet takes time, man. You have to bite that thing, tie it with one hand, and you can’t wear them to bed. I feel like he comes to work 10 minutes late and wearing seven bracelets.

Rubin: (8:56) So Nick hand-wrote and drew a storybook for Andi, but went to Things Remembered for Kaitlyn? Cool.

Jacoby: (8:58) God, Nick’s poem is so bad. There should be a service where you can have someone write love poems for you. And that person should look like Joaquin Phoenix and wear super-high-waisted pants and fall in love with his iPad. Oh, wait.

There is magic in your eyes

And when I look at you
I see my future

If I may quote my best pal Allison Kostka, who just chimed in via text message: “The real loser of this season was the English language.”

Rubin: (9:05) Is this the first time that Shawn has imbibed something other than beer or whiskey? #WineWatch

Rubin: (9:16) Shawn is crushing this final date. A memory jar! That’s more like it! (Even if it’s also from Things Remembered.) He’s drinking beer again, and it shows. SCHNOZ FOR THE WIN!

Jacoby: (9:17) I went back and watched it three times: There was totally a condom wrapper in the memory jar.

Rubin: (9:40) I can’t believe Troy Tulowitzki just hijacked my ability to focus on this fully. So selfish.

Schilling: (9:41) Mal, what will make you more upset: Tulo helping the Blue Jays win the AL East over the Orioles or Nick winning The Bachelorette? 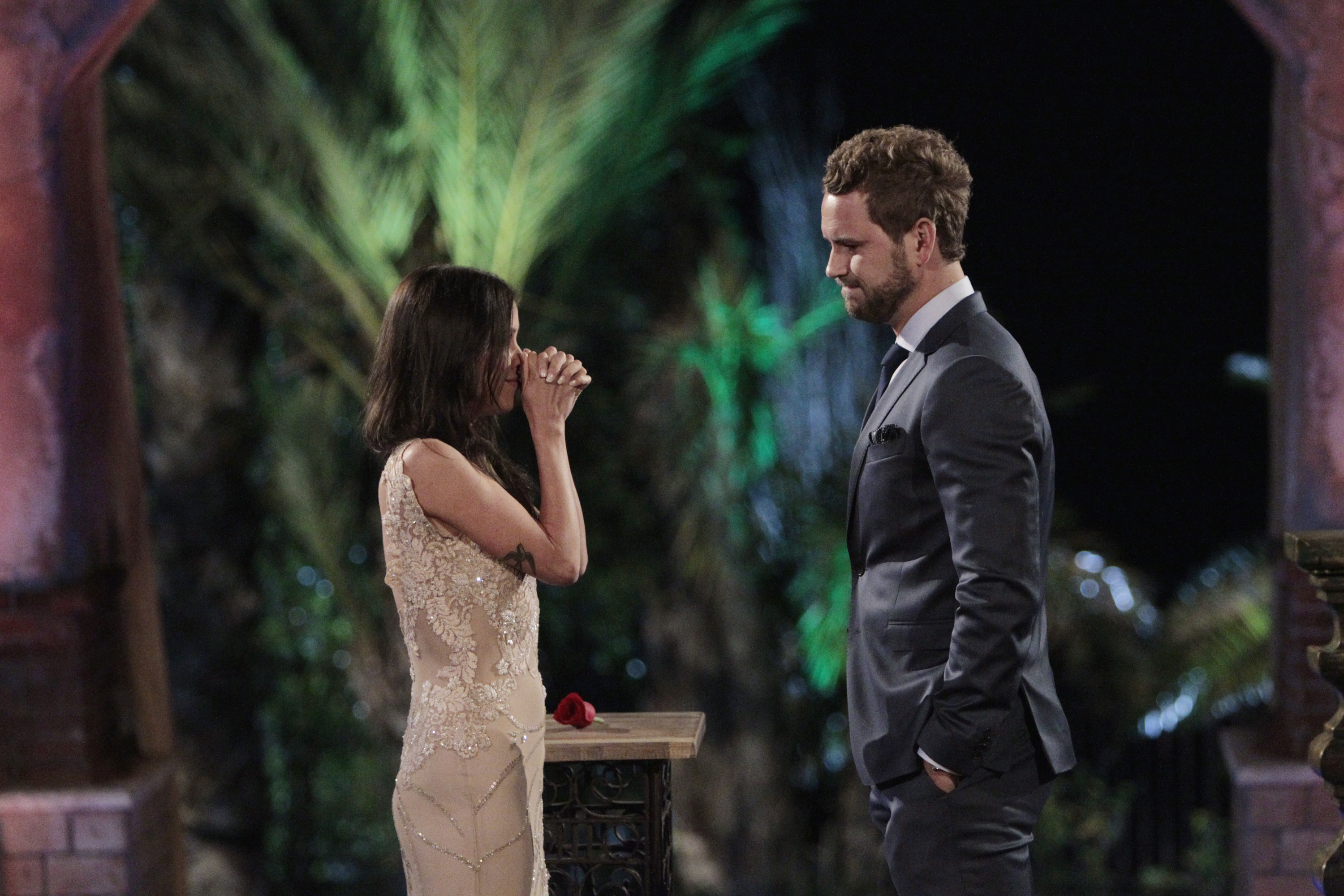 Jacoby: (9:43) Nick saved his best performance for after she Dikembe finger-wagged his engagement shot at the rim. He is bodying this breakup. There is no doubt in my mind that he saw this coming and prepped for it by thinking, How should I behave to guarantee that I will be the next Bachelor? Oh yeah, he was also thinking, If I put one on my ankle, is it still even a bracelet … ah, who cares.

Schilling: (9:46) I’m OK being wrong about this. Something about failure looks right on Nick. He wears it well. Like a bracelet.

Schilling: (9:50) “I’m the world’s biggest joke.” I haven’t seen a last-second collapse this bad since Game 6 of the Clippers-Rockets series. How did Nick really lose to a guy who had, like, eight nervous breakdowns in the span of a single season and was revealing his deep, dark secrets to one of the sound guys? If Shawn had to spend another week with Nick, he might have cut off his own ear and left it in front of Kaitlyn’s hotel room. This is a shocking meltdown.

Rubin: (9:51) Props to Nick’s family for showing up for the live show. That can’t be easy. Just like it’s not easy to listen to Chris Harrison say “fin-ah-lee.”

Jacoby: (9:53) What are the chances if you Google “Nick Viall Bracelets” you can buy them $9.99 plus shipping? A kabillion percent?

Jacoby: (10:19) OK, Ryan Schnozling’s sister sees Kaitlyn, Queen of Coitus, GOAT Bachelorette Champion, Breaker of Chains, on TV and decides he is the one for Kaitlyn, he puts a picture of her with a heart around it on social media, he gets the first-impression rose, then he gets the first “off camera” time, and then he gets “you are the one” affirmation. Is it possible that he really led wire-to-wire? Is it possible that she knew she would marry him from the jump? The only real reason you have to think otherwise is the “connection” and “intimacy” that she’d share with Nick. That can be easily explained: Irish whiskey. There is not a single person reading this who hasn’t slept with someone they shouldn’t have due to Irish whiskey. Ryan Schnozling had it in the bag the whole time he was with Kaitlyn.

Rubin: (10:20) Yes, much like the 1997 Baltimore Orioles, the Schnoz went wire-to-wire. (Sorry, I’ve got baseball on the mind. Curse you, Blue Jays.) Unpopular opinion alert: I’ve always had a soft spot for Nick, who’s got that hot Hobbit look working for him, so I’m sorry to see him take another highly public kick to the naughty bits. But Shawn and Kaitlyn were as meant to be as any TV-manufactured pairing. They’ll be happy playing golf, and bowling, and forcing each other to streak across public spaces. Their children will be great dancers and lifters. They’ll make each other laugh. Or they’ll flame out after a few illicit Snapchats and Shawn will end up on next season’s Bachelor in Paradise. Either way, it’s a win for love, and a win for the television viewing public. And that’s as sweet as any rose.

Schilling: (1:00) Kaitlyn and Shawn concluded their victory lap on Jimmy Kimmel Live last night, where they pledged to pay Jimmy $1,000 if they don’t stay together … for at least a year. What’s a year? A year of marriage is nothing! I’ve been married almost a year now and year one is ridiculously easy! You go on vacations, giggle every time you say “husband” or “wife,” snuggle a whole lot (the snuggling is NON-STOP. It’s crazy), and generally revel in the novelty of doing married-people stuff like shopping for caulk on Sunday afternoon for the first time. Impromptu Home Depot trips are not nearly as thrilling after Year 40, or so the ashen look on my dad’s face led me to believe. So I look forward to coming back here in 364 days to congratulate Shawn and Kaitlyn for doing the bare minimum required and then splitting up quietly. That’ll be fun.