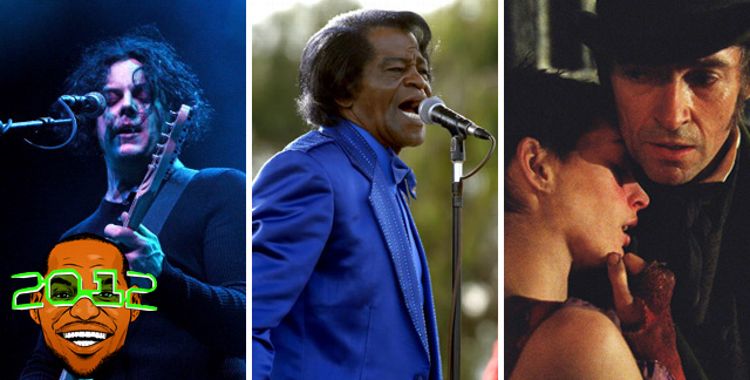 2012 has been a remarkable year for testing the limits of trailers, with studios often oversaturating the market with four or five previews before a film is actually released, putting out teasers for “official” trailers, and even deploying the much-hated “teaser for the teaser.” While this double-tease phenomenon has been the lowlight in the world of movie previews this year, a high point has been the music that has accompanied the trailers.

It’s not simply acoustic guitar into electric guitar with a voice-over anymore. Or just “O Fortuna” or “Gimme Shelter” over and over again. (Well, there was Flight, but …) Major artists are getting involved, new artists are breaking into the mainstream by way of their inclusion in a big movie’s trailer and, in many cases, a trailer (and a film) would be nothing without the wise decision to incorporate the perfect song.

They weren’t all good, though. Magic Mike using Rihanna’s “We Found Love” was a pretty noticeable low point, as was, surprisingly, every time Jay-Z found his way onto a trailer, from G.I. Joe: Retaliation (“Don’t Let Me Die”) to 42 (“Brooklyn Go Hard”) to Gangster Squad (“Oh My God”). Perhaps the worst offense, however, goes to one of the better songs, with Resident Evil: Retribution teasing the audience with “Baba O’Reilly” before transforming into something completely unspeakable.

Thankfully, there were fantastic moments. Sometimes the entire trailer contained a song that held it up from beginning to end, others began amazingly with a song, and then there were those that made a transition halfway through, completely adjusting the way the viewer perceived the film, for the better. The following are the best of the best. Eleven to be exact, because why not?

While I’m quite excited for the film, I haven’t been the biggest fan of the more recent music thrown in the Django trailers. I know, I know, it’s Tarantino, I get it. Just not feeling it. It kind of makes me feel like slavery isn’t over. Go figure. Anyway, of all the choices (especially the Rick Ross track from the third trailer), “The Big Payback” is the one I enjoyed the most. It’s grown on me. And, when taken literally, it’s perfect.

10. Epic: Snow Patrol, “The Lightning Strike (What If the Storm Ends)”

This song, combined with Epic‘s visuals, just transports you to another place, which is the perfect way to utilize a song in the trailer. There’s no way I’m that interested in this purely on plot, but with the song it somehow turns me into a believer.

The purpose here is to trick the audience, and tricked I was the first time I watched the Ted trailer. YOU GOT ME, MACFARLANE. And of all the soft songs to pick from, they picked the softest in “Sweet Disposition.” Bravo.

The inclusion of this song, which takes place in the last seconds of the clip, completely makes the trailer. Also, “True” is the best, and that’s especially true when played at a party filled with monsters that are in college.

I can’t think of a more creative way to display the credits of people involved in a film than having them displayed on block letters to the beat of Doug E. Fresh doing his Doug E. Fresh thing. There’s a lot of great music-related things in this clip, but this is easily the high point.

The idea of Donovan being the soundtrack of an animated film about kids is something I fully support. It works so well. Easily the chillest trailer of 2012.

Yes, it makes sense that a concert film would have a musical element to the trailer, but few have been carried out as wonderfully as Shut Up and Play the Hits and “All My Friends.” Taken literally, it works, because it’s their final concert in MSG surrounded by some of their most adoring fans, and simply as a song it works because the energy and raw emotion of the song match the energy and raw emotion of the crowd, as well as the band.

At this point, songs from M83’s Hurry Up, We’re Dreaming are almost unfair to put in trailers, because they make even the most confusing, nonsensical films feel incredible. Yes, people were excited for Cloud Atlas based on what they were witnessing, but there’s no way the level of mania would have been that high were a different song in the second half of the trailer. Free idea: If your movie is turning out poorly, throw “Outro” behind it and watch it get picked up. I promise. The song is pure majesty.

Not only is Jack White’s version of this U2 song great, but it makes up for the first half of the trailer, which is the combination of The Great Gatsby and “No Church in the Wild,” something that will never sit well with me. They should never be together. Ever. Thankfully, by the end of the trailer, the power behind “Love Is Blindness” has almost made the viewer forget about the first song. Almost.

Just hearing the first three notes of “One Day More” got it to number two. Yes, the first trailer with Anne Hathaway’s “I Dreamed a Dream” runs high on emotion, but the orchestration behind “One Day More” is the backbone of Les Misérables.

No-brainer. For the rest of my life, I will never be able to separate this song from this film and vice versa. They are stuck together until the end of time. Hardy’s song fully supports the cool vibe that the film suggests, works perfectly with the outfits, with the subject matter, with the characters, just everything. It’s almost as if one never existed without the other. But they did, which makes the union even more special.

Anchorman 2 Asks: What Are You Doing Exactly a Year From Today?

Afternoon Links: Big Boi Reads The Grinch, the End of the World, and an Incomprehensible Miss Universe Contestant