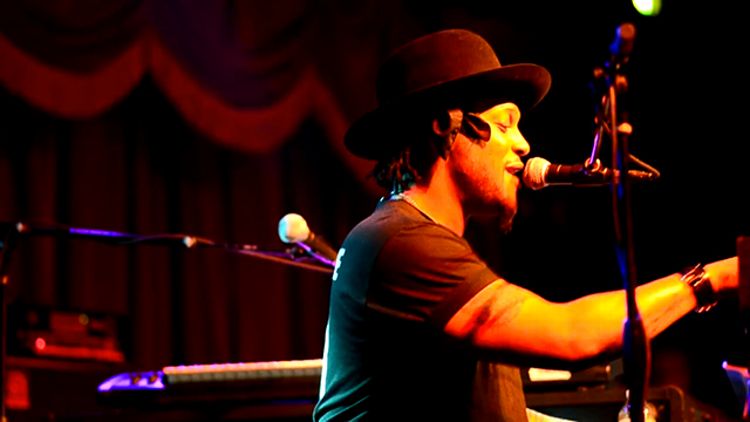 something”s gonna happen major in about 6 days. Warning you now. you’ll have like 3 mins to swipe CC. id follow @brooklynbowl if i were u.

He was not lying.

For certain people, like those who grew up on a certain type of music, few words elicit stronger reactions as “Soulquarian.” Perhaps the most dynamic non-group, non-record label centered music collective, ever, the members continue to represent a period of music that changed the way R&B, soul, and hip-hop were, and continue to be, appreciated.

So titling the Brooklyn Bowl show “The Soulquarians: Brothers in Arms (?uestlove & D’Angelo Doin…” was appropriately cryptic, exciting, confusing, and most importantly, filled me with the highest of expectations, as well as giant fear of being let down (the “Lauryn Hill Phenomenon,” if you will).

Seeing D’Angelo twice in his 2012 comeback tour (at the Made In America festival in Philadelphia and New Orleans’s Essence Festival), I had a sense of what D’Angelo would bring to the table in this two-man show: new music, a voice that increasingly reminds you of the Brown Sugar era, a Zorro hat, a shirt that doesn’t come off, and maybe one classic hit.

And that’s exactly what happened.

Normally, when a late performer finally takes the stage and tells the audience “you can wait another two hours,” this would be met by jeers, but when D’Angelo followed with “Y’all waited 13 years,” — referencing 2000’s Voodoo, his last album — we couldn’t help but agree and cheer.

And before launching into the set, Questlove (speaking solely on behalf of the duo for the duration of the set) told the crowd, in reference to the past and what was to come that night, “We just jam and see what happens. Lower your expectations.”

Maybe expectations were lowered for those in attendance who were looking for singles, but for the majority of the crowd that seemed anxious to go along for the ride that was this once-in-a-lifetime jam session, their expectations were appropriately cemented at high. And they were met.

The song selection was fantastically scattered — from covers of Sly and The Family Stone’s “Let Me Have It All,” the S.O.S. Band’s “Tell Me If You Still Care,” and Prince’s “New Position”; to the Voodoo deep cut “Africa”; to songs one assumes will land on his “upcoming” album. (That word will remain in quotations until the moment I am holding the CD case, ready to spend 8–10 minutes attempting to rip off the Army-grade plastic wrapping.)

After finishing up with “Africa,” the two men walked off the stage, having not played a single song that the casual D’Angelo fan recognized. I wasn’t mad at this, because no one in that room deserved his voice in such an intimate setting. He sounded so like himself, the $35 would have been worth it for him to falsetto croon a few pages of the classifieds and a funeral program.

A few minutes later, however, the two Soulquarians stepped back on stage and performed Track 9 of Brown Sugar, “Lady.”

Once they finished, and left for good, the lights in Brooklyn Bowl came up and no one seemed to know what to do with themselves. But unlike last call, no one felt shame or disgust.

We’d all been cleansed. And there was nothing left to do but go home.

Filed Under: D'Angelo, Live Music, Questlove, The Roots, We Went there