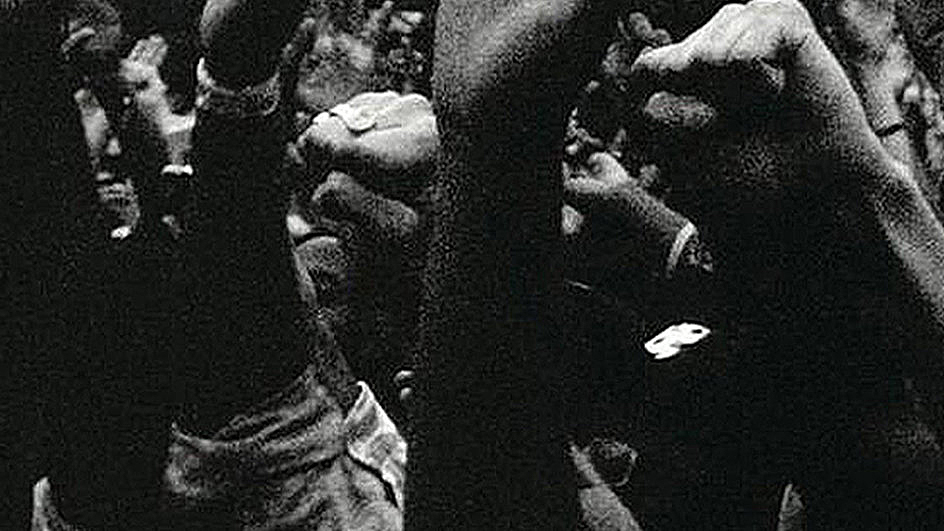 “I’m letting you know / that it ain’t no gun they can make that can kill my soul.”

No other lyrics more perfectly captured the spirit bubbling under the surface of hip-hop in the latter half of 2014 than those sung in J. Cole’s cracking, raspy-voiced performance of “Be Free” on The Late Show on December 10. Clad in a “Fuck Money Spread Love” hoodie, and rocking the post-natural, 2014 version of the revolutionary ’fro, Cole used the venerable Ed Sullivan Theater as a pulpit, bringing attention to Ferguson and the #BlackLivesMatter movement. He provided an anthem for protests taking place just blocks away. While late-night performances are usually for album promotion — in this case for Cole’s surprising 2014 Forest Hills Drive — it was clear Cole was about more than selling records. He was making a statement.

Less than a week after Cole’s live tour de force, Kendrick Lamar, the artist to which Cole is most often linked, gave a similar whirlwind performance of an untitled song on The Colbert Report. Perhaps inspired by the same social climate, and sporting similar lyrics — “tell ’em we don’t die / we multiply!” — Kendrick’s appearance acted as a call-and-response to Cole’s.

The two performances bookended the stealth release of D’Angelo’s seismic Black Messiah. While D’Angelo’s comeback album — a near-decade’s worth of sociopolitical anxiety and creativity — was not written in direct response to last year’s events, the lyrics were almost like strong wine, fermented from earlier events and protests. D’Angelo’s timing was in itself a protest.

If late 2014’s surge in politically charged music is any indication, then 2015 could be a year of kick-ass, no-holds-barred, take-no-prisoners protest songs. Black Messiah is still radioactive right now, with a half-life that should continue to melt eardrums and car amps well into this year. Songs like “The Charade” and its lyrics about the dialogue of violence still have plenty of time as relevant companions to activism in 2015. Kendrick’s album is expected sometime soon and appears to have the makings of a statement album, even in the wake of his recent comments.

Looking forward, the artist who most mainstream music fans associate with incorporating protest music into his work, Kanye West, just released new music and will likely have an album out in the first half of the year. Even though “Only One” is a personal ode, precedent from all of his previous work indicates that Kanye’s next album will be political in some way. This is an artist who keeps his eyes and ears open.

We can divine plenty about the upcoming year and its musical character by looking at the defining quality of protest music: its cyclicity. Going back to the late ’60s and early ’70s, we see another time of social unrest, racial injustice, police brutality, and riots. This period shares obvious social and musical threads with our current day and age. Woodstock in 1969 gave the world a drug-fueled mosh of hazy protest ideas and stories that defined a counterculture. The most-remembered moment of explicit protest was Jimi Hendrix conjuring up Mjölnir in guitar form and blazing the national anthem into dust with a machine gun outro.

But Hendrix was just one voice of many, in a crowd of musicians and fans making some form of protest.

Among the acts that also performed at Woodstock was Sly & the Family Stone. The festival was a stepping-stone for the band’s magnum opus, 1971’s There’s a Riot Goin’ On. The album — which gave funk its dirty, bass-driven final form — also bore some of Sly’s (then completely under the sway of the Black Panthers) most revolutionary lyrics. “Riot” is mean and fuzzy, and the bass lines are so grimy they might have left behind oil slicks. But for all of its sonic singularity, perhaps the most remarkable thing about There’s a Riot Goin’ On is how it functioned as a response to the call of another protest album.

That album was Marvin Gaye’s What’s Going On. Released six months before its funky sibling, we remember Gaye’s album for what it is: a musical supernova, a fusion of the great ideas found in soul and funk, filled with lyrics by a man playing both the street-corner preacher and bleak prognosticator. The album’s title track is arguably the crown jewel of American music. But we don’t often remember that What’s Going On almost never was. Gaye suffered through a deep depression, partly brought on by the diagnosis of a brain tumor for close friend Tammi Terrell, and her later death. He struggled with substance abuse, once attempted suicide, and almost walked away from music forever.

His return to the art was transcendent and carried with it echoes of crises that had fermented in his mind over the prior decade, including the 1965 Watts Riots. What’s Going On wasn’t exactly a direct response to events happening on dates in 1970 or 1971. Rather, it was a timeless blend of ideas and musical structures that existed in response to familiar themes of racial struggle that had become an American cultural leitmotif long before.

This isn’t an elaborate setup to compare D’Angelo’s return to form with the incomparable Gaye. But it is a reminder of the cyclicity at play. Music is in constant dialogue with itself and popular culture and real-world events, and all of those things feed continually and echo one another through time. Ideas, genre conventions, and even figures become the tail of the ouroboros, constantly consumed, reconsumed, and reimagined to fit the present struggles at hand. Curtis Mayfield and Gaye sampled Ghanaian highlife and Afrobeat and dabbled with reggae; those genres had drawn from jazz and soul from the States. Hendrix filtered Delta blues, hard rock, gospel, and jazz through an overdriven Marshall amp, just before Miles Davis’s trumpet spit it all back out in 1970’s triumphant statement Bitches Brew. Hip-hop’s early heyday saw artists repurposing the greatest ’70s protest music, in samples sewn in between breakbeats. A generation later, Kanye West, a scion of the Black Panthers himself, built whole new worlds around Gaye’s music and went to space on an Evel Knievel rocket bike over Mayfield.

In a way, Kanye is the charismatic center of gravity of this musical moment. His music has always had protest in its genes, buried as it often was under his megalomania, silliness, and sometimes startling misogyny. But he has always been mindful of trying to say something. Even his battles with materialism and ego were often laced with subtle nods via samples to revolutionary forebears.

As hip-hop pulled further away from its explicitly political roots, became more of a postmodern reflection on style and aesthetics, and migrated ever further into the mainstream, Kanye managed to be simultaneously within it and without. His work can feel like immediate, of-the-moment pop music while still maintaining an electric connection to the past. Nowhere is this more evident than on 2013’s Yeezus, his first true protest album.

Regarded curiously by most upon release, it has since been absorbed whole by hip-hop’s sensibilities. Yeezus contained Kanye’s most Kanye moment yet — the apex of his personal-is-political worldview — with “Blood on the Leaves.” On that song, a sample of Nina Simone’s cover of revered anti-lynching protest song “Strange Fruit” is juxtaposed with lyrics that ostensibly detail an extramarital affair.

2014’s Run the Jewels 2 gave us Killer Mike and El-P shining societal frustrations and reflections on violence and police brutality through a definitively post-Yeezus lens. Killer Mike has become a spokesman of sorts for the protests and movement around the fight for racial equality, and the lyrics — again, not written in direct response to current events — carried the weight of a present observer. Black Messiah also called back to earlier tunes in its protest, including a not-so-subtle nod to Mayfield’s lush arrangements. Kendrick Lamar’s late-night performance echoes Stevie Wonder and N.W.A’s social warnings. These are all statements. The frustrations of a generation have again begun to push through the economic realities of the market to affect the form of the art.

So we wait for whatever Kanye and other artists will provide this year as the theme song to accompany the beating hearts of the movements. The protests around the nation were sparked out of frustration about incidents of violence against black individuals, but the energy itself is enduring across different faces and times. Whether the protests be in Selma and Birmingham in the ’60s or Ferguson and New York today, the music also endures. Just listen up.

'The Right Reasons' Podcast: 'The Bachelor,' 'The Challenge,' and 'Real World'