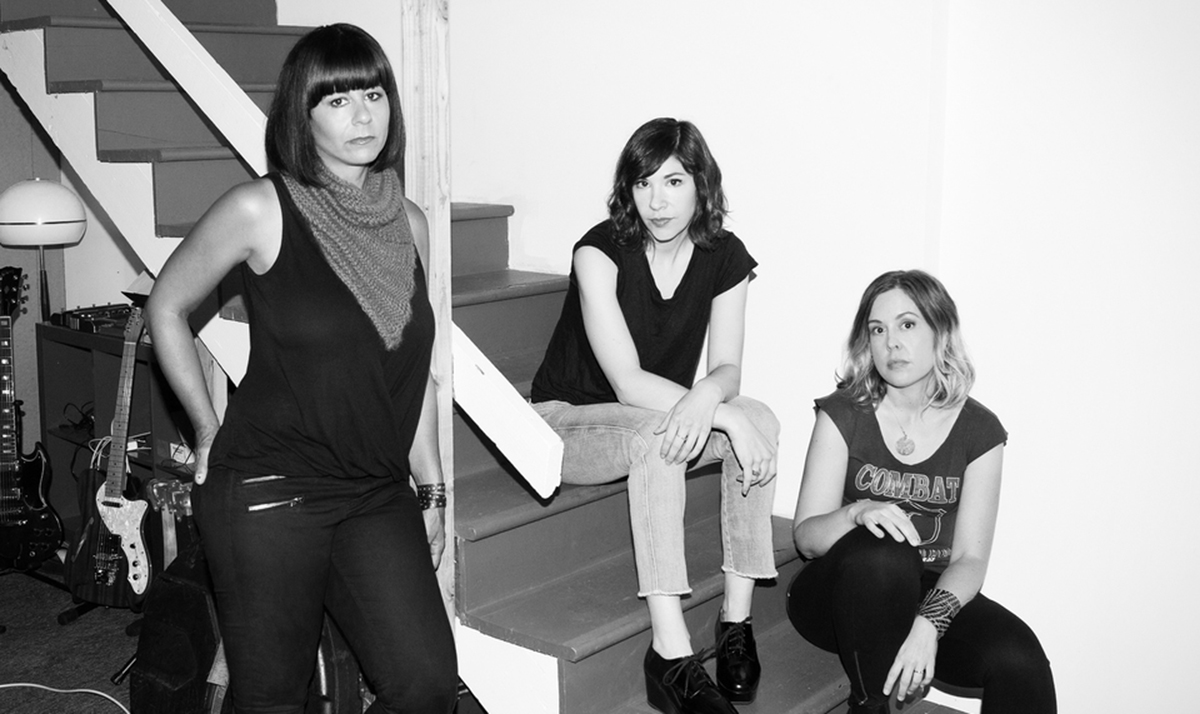 What if they’d called themselves the Uproars? Even by 1994, when 40 years of band names had left the rock-dictionary cupboard pretty bare, and even within the indie-punk lexicon, it was still possible to build a name out of regular English words — the kind people know how to pronounce, the kind they remember. For a new group to call themselves Sleater-Kinney — uh, what? — read as an act of deliberate obscurantism, of introvertedness. Was it Sleeter or Slayter? The hyphenated-proper-noun thing made them sound like prog-rock vanity-noodlers, which was pretty much the opposite of what they were. There was no one named Sleater in the liner notes, and no one called Kinney, either. If you did some research, you could maybe unearth the tidbit that they’d named themselves after a freeway exit in Lacey, Washington, where they practiced. Even by the collapsing post-grunge consensus of the moment, though, the name seemed defiantly anticommercial. It was the sound of a band actively not wanting you as a fan.

That Sleater-Kinney were, in fact, titanic in ambition, with a two-guitar roar that could both remake your reality and knock you on your ass, only made this weirder. Time-burnished S-K lore holds that Corin Tucker and Carrie Brownstein recorded their (eponymous, because of course) debut album over a single day while on vacation together in Australia; you listen to it now and it’s like a leaflet dropped by an advancing army. The power isn’t fully on display yet, but the glimpse of what’s about to hit is terrifying. There’s nothing insular or coy about this music. It’s a static blast of punk rock whose charge comes precisely from what it doesn’t hide. It takes a welter of human contradictions — anger, fear, joy, resentment, hilarity, wistfulness — and then holds them up high and refuses to apologize for them. Whatever the musicians who made this record chose to call themselves, they weren’t ducking you.

Tucker and Brownstein were women in their early twenties, based in the Pacific Northwest, with roots in the riot-grrrl and queercore movements, and as that batch of designations would lead you to guess, their music was proudly political. But it was more than that, too, astonishingly more, even from very early on. Political punk bands, even the really messy ones, tend to be received more as essayists than as artists. And here’s Black Flag’s thesis on poverty … and here’s the Dead Kennedys’ new column on celebrity and mass culture. Sleater-Kinney sang about sexism and gender expectations (“I don’t wanna join your club / I don’t want your kind of love”) and objectification and commercialism (“Do you want it on a magazine cover? / Take it, it’s my body”). But where, say, Bikini Kill — an important early S-K influence — took much of their power from provocation, and so operated on the border of concept art, Sleater-Kinney did something deeper and harder to explain. They brought you into their experience. They involved you in a humanity of which this politics was a natural outcome, and a vital outcome, but not the only outcome. And — this was the miracle — the more they did this, the more weird and funny and mortal they let themselves be, the bigger and more compelling their sound got, and the more they seemed invincible.

The army whose arrival Sleater-Kinney had announced landed in force with their second album, released in 1996. Call the Doctor is an incredible record; at some point in the months since recording their debut, Brownstein and Tucker had figured out how to write melodies (or maybe just decided to stop withholding them) and also figured out how to do a thing with harmony where … well, look, even if you resort to musical notation, punk timbre isn’t easy to decode. But there is a thing that happens to my brain when I listen to Brownstein and Tucker’s harmonies. I’m talking about their vocals, but also about their strange intertwined sea-serpents-spiraling-into-the-deep guitar parts. It feels like parts of my brain are vibrating at different speeds, and the vibrations keep almost converging, and I can almost sense the sine wave they’ll make when they do, only the instant when they’re going to converge, they pull apart instead, and they land on some totally unexpected irrational ratio, a ratio that somehow makes more sense than the expected rational one would. When I listen to Ornette Coleman, sometimes, I get the same effect. It’s unnervingly ugly-beautiful. It makes me feel 12,000 feet high.

Call the Doctor had S-K’s first signature anthem, “I Wanna Be Your Joey Ramone,” which doubles as a perfect introduction to the complex personal and political valences of their work at the time. “Joey Ramone” is simultaneously a take-no-prisoners invasion of male-dominated rock and a love letter to its artistic heights, and it’s really even more complicated than that. Tucker yowl-sings about her ambition to be her generation’s punk icon while chalkboard-nails yeahs detonate behind her: “I wanna be your Joey Ramone / Pictures of me on your bedroom door / Invite you back after the show.” She’s paying tribute to her own rock idols (“It’s on my wall, it’s in my head / Memorize it till I’m dead”) and laying waste to anyone who would let her gender, or anything else, keep her from taking their place.1 “I’M THE QUEEN OF ROCK AND ROLL,” she sings, and it’s kind of a joke, I guess, in that Tucker knows perfectly well that claiming to be the anything of rock and roll in 1996 is inherently an absurd move; at the same time, though, it is ABSOLUTELY FUCKING NOT A JOKE. When she sings, “I wanna be your Thurston Moore,” I can’t speak for you, but there is no quadrant of my being that would rather be Thurston Moore than Corin Tucker at that moment.

In 1996, Janet Weiss joined the band, replacing a series of perfectly adequate drummers whose major shortcoming as musicians was that they were not Janet Weiss. No one is. I’ve never seen Sleater-Kinney live, and I’m not sure I ever could, because it’s impossible for me to listen to Janet Weiss without imagining that, like, atmospheric events are taking place on the horizon. Crows are exploding out of trees. Weiss’s first album with the band was 1997’s Dig Me Out; it’s a masterpiece. Brownstein and Tucker were getting better and more daring — letting in a left-field pop sound, more openly goading each other to have fun. The addition of a pantheon-level drummer turned out to be liberating to their songwriting, too, because there was no limit to what Weiss could imagine. She could take, say, a sunny pop melody and underlay a slightly queasy beat. She could throw down a martial crunch under a comparatively dreamy vocal line. It opened up all sorts of effects. Play the intro to “Dig Me Out,” then listen to the chorus of “Little Babies.” The one stakes out emotional territory you can’t even name (in 20 seconds); the other is a ray of pleasure so focused, it rewrites your mood (in 20 seconds). They sound like the same band. They sound like a band that can do anything.

This was also the peak of the impossible-to-talk-about Sleater-Kinney, the unreviewable Sleater-Kinney. Critics tended to focus on their gender, which put them in a maddening good-for-girls bubble; at the same time, if you ignored or downplayed their gender, you ignored something their own work repeatedly demanded that you deal with. “You’re No Rock N’ Roll Fun,” from 2000’s All Hands on the Bad One, taunted an aloof male rock genius for refusing to hang out with “the girl band” on tour. Part of the delight of the song was the song’s own delight in how casually the girl band blew the doors off the genius’s work.

This problem was mostly a reflection of the fucked-up gender dynamics of the music and music-criticism industries, obviously, that it was even possible for a band this lethally talented to get written about in some quarters as a kind of admirable novelty act. But then, how do you describe anything in terms that are both adequately political and adequately apolitical? I’ve spent some time recently driving around Midwestern highways listening to Sleater-Kinney, and there were times I could believe that Corin Tucker’s voice was what flowed through all the power lines — that the grid was made of Corin Tucker’s voice, holding a note that was half gorgeous and half a scream, and that when you went into your house and turned on a lamp, Corin Tucker’s voice was the light that came out, and it was up to you to decide whether it mattered more that light was light or that light was a girl.

I’ve been driving around listening to Sleater-Kinney because they have a new album out, No Cities to Love, their first in 10 years. During the long hiatus, they all played in other bands; Brownstein starred with Fred Armisen in Portlandia and became more famous as a comic actress than she’d ever been as a musician, which is crazy. The immediately striking thing about No Cities to Love, though, is how little it feels like a reunion record. It could have been made a year after The Woods. It could have come out 10 years from now. You get a sense from it that time doesn’t really exist for Sleater-Kinney, that whatever alchemy of temperament and talent makes them who they are is too strong to be endangered by disuse. That may be a fantasy, but it’s a welcome one.

No Cities to Love is a terrific album, if you need me to say so. It’s realistically maybe their third-best record, after Dig Me Out and Call the Doctor,2 and that’s not faint praise; I first thought, They are out here embarrassing every rock band on the planet about two minutes into the first song, the antiglobalization march “Price Tag.” (And I really thought that when I heard whatever is going on with the guitars during that song’s last 20 seconds.) “Fangless” sounds like three separate musicians practicing three separate songs that happen to synchronize in ways no one possibly intended — Charles Ives rock, and I’m pretty sure Charles Ives would have loved the guitar solo. I need to listen to the whole album about 50 more times, but I’m already glad it’s in the world; there was no guarantee that it would be.

In a way, though, a 10-year hiatus that wasn’t a hiatus at all perfectly fits the logic of Sleater-Kinney. No band of the last 20 years has been better at simultaneously applying labels and escaping them, at finding the gaps in which they’re free to make the statements that matter to them without being reduced to anything less than their full complexity. Now they’ve given time the slip, too. Their name made sense not because they were trying to evade their listeners but because they were good enough to demand that their listeners come to them, in their own strange spaces. (The highway exit, remember?) And if you did, they made you feel like them, whether you were like them or not, because that is what good art can do. It can bridge distances. It can sustain contradictions. I’m the queen of rock and roll.