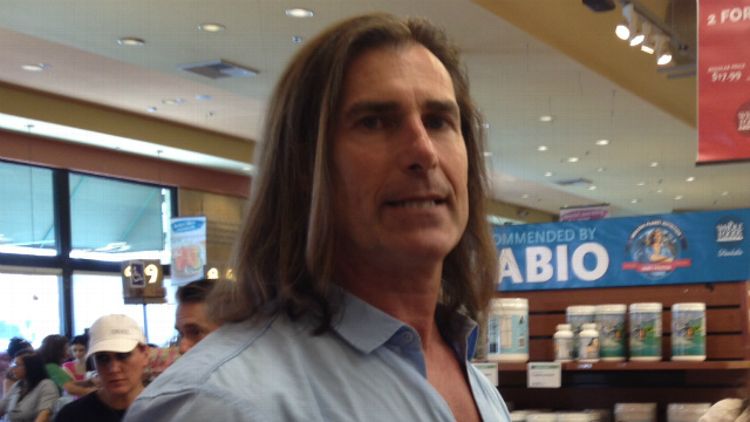 If there’s one supreme rule of etiquette that anyone who has lived in Los Angeles for more than a year or so eventually learns, it is this: Do not acknowledge celebrities at Whole Foods. Whole Foods Market is a kind of Demilitarized Zone in the vast and varied landscape of Hollywood; a place where we have all agreed to let the stars buy their rainbow chard and gluten-free cookies in peace. (This has less to do with consideration for the celebrities and more to do with keeping alive the notion among the civilian shoppers at the West Hollywood, Third Street, and Brentwood locations that they are also very, very famous and important.)

But what happens if, God help you, you find yourself at the Glendale Whole Foods, and the celebrity in question is none other than legendary handsome punchline Fabio, and not only does he want you to approach him, he has posted up for a six-hour(!) “meet and greet” to promote his new brand of protein powder? That there is a no-man’s land of celebrity etiquette. Fabio is not a celebrity, he is a Fabio, and if you try to act like you’re too cool to at least go, “Hey look, it’s Fabio,” you are fooling yourself, my friend. On the other hand, I’ve never been entirely comfortable with in-store appearances and book signings, mostly because I shop at the West Hollywood Whole Foods and am myself very, very famous and important. So I felt a little unsure of myself as I made my way to the store on a Saturday afternoon, having been lured by the promise of seeing this 20th-century icon of the male physique in the flesh. As the sliding doors opened, I saw the flash of his unmistakable golden mane from behind a display of two-bite brownies, and made my way toward him, edging into the small cluster of rapt housewives and smirking twentysomethings who had decided to place themselves in Fabio’s radiant orbit that afternoon. (Yes, they were all women — the husbands and boyfriends all kept a healthy distance, snapping pictures from afar, as if Fabio emitted some pheromone that compelled them to surrender their companions and carry on sorting through the heirloom tomatoes.) There he was, all seven feet of burly, sun-damaged manliness, staring deeply into our eyes and talking to us at length about something he passionately cared about — the biological content of whey.

Nobody would say that Fabio is having a “moment” right now, nor has he had one in the last decade — but, at the same time, has Fabio ever truly been irrelevant? Even the two gawky tween girls who hung back nervously behind their mothers knew who he was, and they were surely born long after Acapulco H.E.A.T. went off the air. If Glendale mayoral-candidate-to-be Kim Kardashian was signing containers of protein in a suburban grocery store, you can bet the line would wrap around the block — I wouldn’t necessarily expect the same fervor for Mr. Lanzoni, but I was still surprised by how little his presence seemed to matter to anyone else in the store. As I paid for my lunch of vegan curry chicken salad and coconut water, I asked my cashier, a middle-aged woman in a bedazzled baseball cap and chunky “I’m still young at heart” jewelry, what she made of that day’s special guest.

Cashier: “I don’t know. I just do checkout.”

Me: “Are you gonna get your picture taken with him?”

Cashier: “Oh, I don’t think so, I have to stay here.” [Indicating checkout aisle.]

The same sentiment seemed to carry throughout Whole Foods that day. It didn’t help that there were about 10 other promotions going on in the store, including a raffle that involved ear-splitting announcements over the loudspeaker every five minutes. The raffle table took up the prime real estate at the front of the store; Fabio and Healthy Planet Protein was relegated to a cramped corner by the supplements aisle. Every time another raffle winner was announced, Fabio would be forced to raise his voice, a twinge of annoyance crossing his chiseled visage, and the cluster of women would inch in closer to hear him. I felt bad for Fabio; though his shoulders were as broad as ever and his pecs strained against the confines of his shirt in exactly the way I would have imagined, he seemed stressed out. There were also few enough people listening to him that it was impossible to duck out without being noticed, so I guiltily stood and submitted myself to his apparently never-ending nutritional science lecture for about 15 minutes. (“Science is about math and numbers,” was a key point he repeated at least twice during this time.)

Healthy Planet Whey Protein costs $45 per container. It has an illustration of Fabio on the label, wearing the same blue linen button-up that he was wearing in the store that day, and that he appeared to be wearing during his fateful visit to Busch Gardens in 2009. While I stood there, nodding solemnly as he dispelled the myths of the nutritional value of soy, I tried to puzzle out why this appearance was taking place in the relative backwoods, as opposed to the more glamorous Hollywood or Westside locations. I was feeling charitable, so I decided that it had nothing to do with his level of celebrity and more to do with the fact that he was hawking whey, which is not currently in vogue in the eternally fickle protein powder market (I mean, DUH, it’s all about hemp and spirulina right now.) Perhaps his long-running association with decidedly non-whole food I Can’t Believe It’s Not Butter also knocked him down a score or two on the Whole Foods Celebrity Power List.

As you probably guessed from my aforementioned lunch, I am vegan, but I felt it was my journalistic duty to try Healthy Planet Whey Protein for myself. I finally broke away from the lecture to go visit Fabio’s Healthy Planet wingman at the sample table and try a tiny sip of the chocolate shake. It was surprisingly light and airy, and when the representative asked if I liked it, I told him that I did. He told me that if I purchased a container, I could get a picture with Fabio. “I’m vegan,” I responded apologetically, then stopped just short of hastily adding, “I just wanted to see what Fabio’s protein tasted like.” I tossed the little paper cup in the wastebasket, checked the photo roll on my phone and decided I hadn’t gotten a very satisfactory picture of the man of the hour yet, then darted back to snap another. Immediately, all the ladies glared at me — and Fabio himself looked nonplussed that I was so brazenly bypassing the suggested $45 photo-op purchase price.

Strangely, as I hurried out of the store before any (likely imagined) handlers could give me a hard time, I felt none of the shame I would normally feel for breaking the Whole Foods celebrity rule, or even just for openly gawking at a fading icon in such a humble setting. When a man becomes internationally famous in the ’90s for gracing the covers of romance novels and selling margarine, part of the deal is that in the 2010s he will have to do things like show up for six-hour protein-powder signings in the suburbs, and that people will take unsolicited cell phone pictures of him — that’s just the way of the world. These are lawless times for Italian beefcakes. Forget it, Fabio, it’s Glendale.

Emily Yoshida (@emilyyoshida) lives in Los Angeles and actually has nothing against Glendale whatsoever.