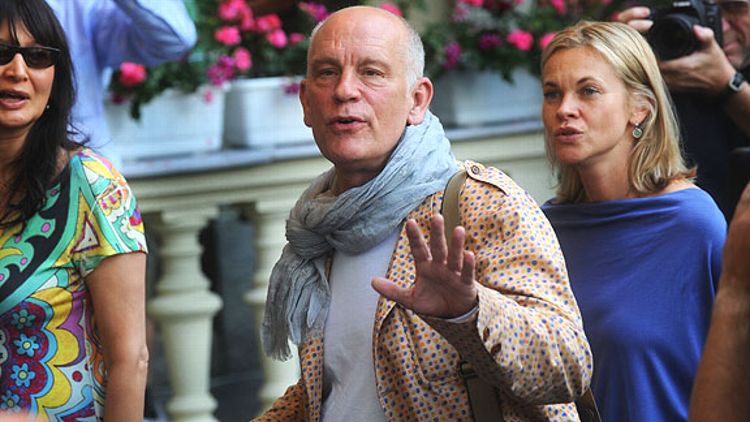 Sex and the City author Candace Bushnell’s 2008 book One Fifth Avenue will be adapted by ABC (under the title One Fifth). The plot revolves around a columnist who moves downtown to the titular address after separating with her husband, and is then pulled right back into the Upper East Side when she starts reporting on a scandal in her old building. Gossip Girl’s Joshua Safran will write the project, thereby continuing his tragically futile game of one-upmanship with novelist Jonathan Safran Foer. Grade: C [HR]

Walking With Dinosaurs — a $65 million CGI/3-D movie based on the popular traveling arena show — will utilize James Cameron and Vince Pace‘s earth-shatteringly groundbreaking Cameron | Pace Group 3-D technology. As far as we can tell this doesn’t mean you’ll be able to transport your brain into a dinosaur, Na’vi style, but, you know, give them time. Grade: A [HR]

Scott Foley wrote a TV show! The actor has teamed up with Pushing Daisies‘ Rina Mimoun on The Escape Artist — about a brother-sister team who help people disappear — which they’ve sold to CBS. This is particularly noteworthy because Foley’s only previous brush with the writing process was suggesting the plotline where Felicity cut her hair. Grade: C+ [HR]

Prolific production duo Josh Schwartz and Stephanie Savage (The O.C., Gossip Girl) have sold the sitcom My Best Friend Is a Lesbo to NBC. A semi-autobiographical premise written by Randi Barnes and Sascha Rothchild, it’ll revolve around two best friends in L.A., one gay and one straight. Congratulations to Barnes and Rothchild and everything, but this is really going to put a cramp in our own sitcom spec, My Best Friend Is a Couch. Grade: B [HR]

TNT has given a pilot order to Scent of the Missing, an adaptation of Susannah Charleson’s book about a leader of a search-and-rescue team whose partner is a golden retriever. A small step in the right direction toward correcting television’s unjust underrepresentation of hero dogs. Grade: D [Deadline]

The Jonas Brothers’ Nick Jonas will replace Daniel Radcliffe in the Broadway musical How to Succeed in Business Without Really Trying starting January 24. In return, Radcliffe has promised to consider buying a Jonas Brothers T-shirt. Grade: B [Deadline]

The Decemberists’ front man Colin Meloy has just dropped Wildwood — a young-adult fantasy novel, illustrated by his wife Carson Ellis, about a girl who enters a dangerous world of magic to save her brother — but it’s already been optioned for an animated feature by Laika, the company that did Coraline. All other twee indie-rock dudes: Step your game up. Grade: B+ [Variety]

Filed Under: ABC, Grading the Trades