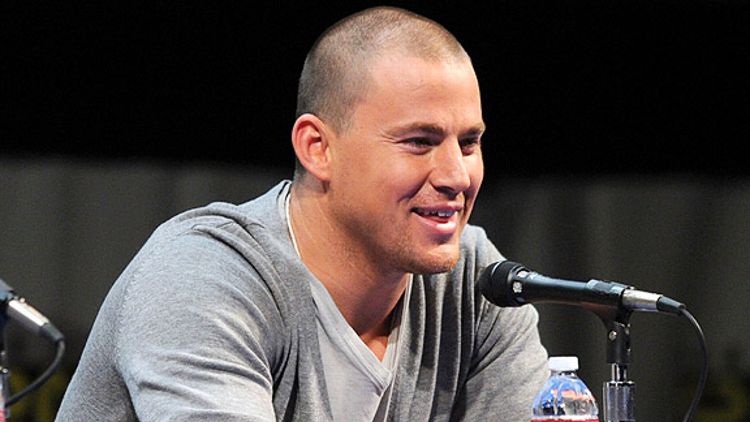 Of all the things to make a movie about, Channing Tatum’s former stripping career seems like a strange choice. So bless Steven Soderbergh, then, for having the chutzpah to do Magic Mike, his upcoming film based on Tatum’s early work as a dancer in a Chippendales-esque Florida nightclub show called Male Encounter. Joining Tatum himself (who’ll play the film’s title role) will be stripping novices Matthew McConaughey, Joe Manganiello, Alex Pettyfer, and Matt Bomer. Sure, these guys look the part — but can they dance? Can they entertain? Could they hack it as Chippendales dancers? For answers, we presented photos and YouTube evidence of the cast’s dancing abilities to Chippendales general manager Kristen Makhatini and dancer Jaymes Vaughan. Here’s what they told us.

First: What do you think of the title Magic Mike, which is also Channing Tatum’s character’s name?
Makhathini: Our performers don’t have gimmicky nicknames like that, but for the purposes of the movie it seems to work.

Vaughan: Strippers commonly do performer’s nicknames. At Chippendales it’s not really the same thing. We’re a show, not a strip club.

What about Tatum’s dancing skills?
Vaughan: I think his strip club stuff has prepared him pretty well to be a stripper in this movie. And his dancing in his other mainstream movies will hopefully help him come across as more legit, as not a stripper but as a performer.

Makhathini: Backflipping off the car and all that — he’s definitely got some acro skills. It can only help.

Acro skills? Is that a big part of the Chippendales show?
Vaughan: Oh yeah. We got a guy that flips off a motorcycle.

Makhathini: Any kind of acrobatic flips or tricks, the girls love ‘em.

Vaughan: By the way I checked everybody’s heights, and [Tatum] meets the requirements: he’s six foot one, so he would be eligible to audition for Chippendales. But from what I’ve seen on the Internet, [Magic Mike] is a little more stereotypical, like thong-popping. We don’t do the thong thing. It’s kind of outdated, a little eighties. Our show is more of a production. We have singers, dancers, instrumentalists, rappers, and all kinds of stuff. No one’s gonna come on stage solo and pop their booty in a thong.

Makhathini: The thing that’s the same is the women. They’re going crazy.

Vaughan: If [the cast of Magic Mike] spend time in our environment, and see the girl’s reaction, it’ll make it a lot more real. They’ll see the genuine reaction, rather than just being on set with extras.

If they don’t end up making it to a show, do you have any tips you could share here on how get a good reaction out of the women?
Vaughan: Absolutely. Our world-famous Chippendales tank-top rip off. Every single time, no matter what, you rip off your shirt and go off into the audience and the girls go nuts. That’s a very crucial skill that these guys should have.

Vaughan: His advantage is that he’s six foot five. Every time there’s guy that’s six foot five, and he’s not the worst dancer in the world, the girls are gonna love him.

Makhathini: I think it’s perfect casting, dancing aside. I think he’s beautiful. And his physique, obviously. He’s not just a shredded guy, but a masculine guy. It’s the perfect balance. We don’t like guys who are too musclebound: they have to be able to do the choreography, and guys with too many muscles look awkward. Some of these other guys, while they’re great-looking guys, they tend to be a bit slimmer.

Vaughan: Joe is the closest [physically], and then probably Matthew McConaughey.

Makhatahini: Joe’s werewolf facial hair would have to go. They can have a little bit of facial hair but definitely no beards.

Alex Pettyfer (a.k.a. The Kid)

Vaughan: He’s probably not right for Chippendales, but his role in the movie is “The Kid” and that makes sense.

Makhatahini: He’s got good dancing skills, but he would need to bulk up a little.

Vaughan: He’s pretty charismatic. I think chicks would dig the accent.
Makhatahini: He was a little shy on Ellen. He was clearly thrilled to be on her show, but he was a little hesitant. He could use more confidence.

Vaughan: I think with a hit movie under his belt he’ll get more confidence.

Vaughan: He’s always got his shirt off, and that’s our signature look. No shirt, cuffs, collars. I don’t think I’ve ever seen Matthew McConaughey out of shape. He’s one of the more muscular guys here; he’s pretty good to go. If he walked into the room for Chippendales, everybody would really take a look at him.

Makhatahini: He’s playing a former dancer and a club owner, so he’s perfect for that. And like James said, everybody’s seen him so many times with his shirt off and he always looks good. The other important thing to keep in mind with casting him is that he’s such a fun, free-spirited, goofy party guy, everyone is sort of naturally drawn to everything he does. And that’s important: it’s not all about the physique, or the look, or the dancing ability — they’ve got to have good personalities. The audience feeds off of that. Our audience becomes fans of our dancers as people, who they are in real life. Like, “You’re hot, you’re beautiful, you dance well — but you’re also super fun.” I think Matthew McConaughey in real life seems to have that same essence to him.

Vaughan: I didn’t know who he was.

Makhatahini: I’m unclear as to what part he’s going to play. He’s a good-looking guy.

Vaughan: I was trying to Google him. He seems like he’s in the Alex Pettyfer category — the slim build and height and stuff. I don’t know, he could surprise us. He could be the dark horse that comes out of nowhere and out-dances everybody.

Makhatahini: He could. I agree.