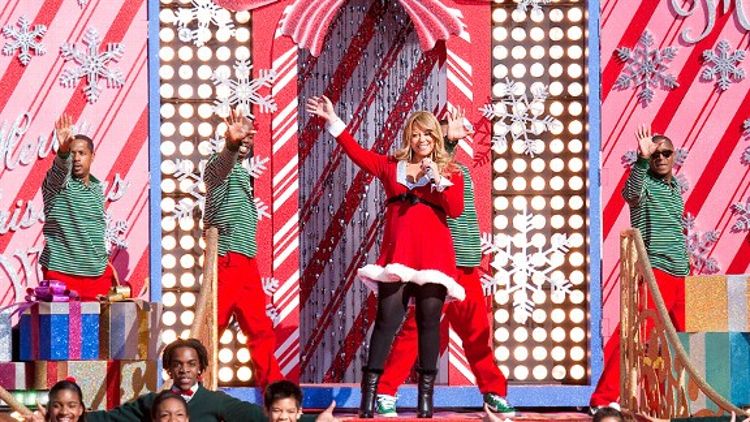 Welcome to December. I have spent most of my Christmases in Los Angeles, where it never snows. It has been bitterly cold at night lately, which has helped get me into the holiday spirit and reminded me how unbelievably bad I am at dressing for and dealing with shitty weather. When I hear Christmas songs, I think of the “ironic” montages from Shane Black movies (and others) where a holiday song plays over shots of palm trees. I didn’t have the requisite non-native distance to get that that was supposed to be weird. My family drove around suburban Burbank every year to check out the Christmas light displays and watch a guy dance on his lawn in a robot costume (we called him “Funky Robot Santa”). Seasonally decorated palm trees still make me feel more excited than firs. Here’s the Top Ten Hot Holiday Songs from the Billboard Charts.

1. Mariah Carey, “All I Want For Christmas Is You”

Nobody owns the “festive” holiday season like the queen of Claus, the voice of the universe’s mysteries, the great and venerable Mariah Carey herself. This song is a lifetime classic because it rulezzzzz. It’s one of the only Christmas songs I can stand to hear out of season because it is foremost well-crafted and catchy, and only secondarily a nutmeg-spiced holiday jam. Mariah flips the Phil Spector holiday album on its back and touches its body in her red velvet, white marabou-trimmed bodysuit. It reminds me of Revlon’s famous ad campaign for Cherries in the Snow and other abstract desires.

Let’s not belieber the point: This is barely a holiday song except for the lyrics. It’s a plodding light-MOR-reggae thing of the sort you hear while checking out the sale rack in American Eagle. Auto-Tune and other filter trickery tries to work around the fact that Justin’s voice is changing. His fans are sure to drink this saccharine drivel up like sugary eggnog dribble before they move on to the harder stuff (Timberlake) in a few years.

Little Miss Dynamite (a.k.a. Brenda Lee) faced the fate the Bieber must endure, as her popularity waned when she aged out of being a child star into being just a regular grown-up lady singer. At the peak of her fame, up-and-coming group the Beatles were her opening act for an early ’60s tour of the U.K. Lee has a perfect rockabilly voice, all singing out and snarl and sassafras. She is cheery without being shrill, jubilant without breaking a fireplace lodge sweat. She sounds like fellow child star Miley Cyrus, who also had a smoky honeyed voice even as a tween (Miley has also covered this song on a Christmas album). “Rockin’ Around the Christmas Tree” came out when Lee was 13 and didn’t sell well until its re-release in 1959, when it did 5 million. Lee held the record for consecutive top ten Billboard Hot 100 hits with nine from 1960 to 1962, a record only later broken in 1986 by Madonna. Lee had her last big hit a year before that, in 1985, a duet with George Jones. She continues to record, tour, and be an all-around bad bitch.

Christmas and rockabilly apparently go together like red lipstick and “Green Front Boogie.” The song that opens Lethal Weapon and serves as a minor plot point in Mean Girls features a prominent double-neck guitar intro that would melt blue suede icicles. It has the beautiful analog warmth I associate with other Christmas favorites, serving as a bed of thick snow for the sleigh bells of a simulated winter ride to lope over. Becomes impossibly hellish when sung by chipmunks.

I read some Old Hollywood blind items about the sexual habits of Burl Ives and now I am scarred for life. Those Claymation Rankin/Bass Christmas specials are weird enough to begin with.

José Feliciano is so fucking cool. Just look at that picture on the YouTube! He apparently constantly pranks his friends about his blindness. He sang a controversial slow Latin jazz version of the national anthem at a Tigers game in 1968 as an anti-war protest. He made a dance record in 1994 (“Goin’ Krazy”) under a pseudonym. His aggressive delivery in parts of “Feliz Navidad” is sorta proto-punk (for a Christmas song from 1970). When he yells “I WANNA WISH YOU A MERRY CHRISTMAS” it’s like he’s an overextended store greeter or gift wrapper nearing the end of his Black Friday shift.

8. Andy Williams, “It’s the Most Wonderful Time of the Year”

9. John Lennon and Yoko Ono, Happy Xmas (War Is Over)”

Impressed this song makes it into the top ten despite its overt political content. (Where’s Steely Dan’s holiday junkie song, “Charlie Freak”?) Doesn’t hurt that it’s such a wonderful song. I always imagine a nativity scene with John Lennon/Joseph and Yoko Ono/Mary singing it to a little baby earth. The other Beatles are the three shepherds.

George Michael is one of my all-time favorite pop stars. Behind the fluffy hair, tawny tan, leather, and denim beats the throat of a classic soul singer. “Last Christmas” succeeds on so many levels: as a Christmas song, an ’80s soft-pop masterpiece, a bittersweet ode to holiday-season melancholia, about the time when we all tend to be willing captives at airports and family homes, forced to cozily contemplate the year that was in the starkest terms between bites of ham. That’s if you’re lucky, of course. But something about all the forced joy does seem to bring out the dark side in people sometimes. Crime spikes around the holidays. This just absolutely smashes the Bieber track in the bubblegum holiday category. I will play this on the in-flight mix on the journey to newly found alternate Earth Kepler B-22.