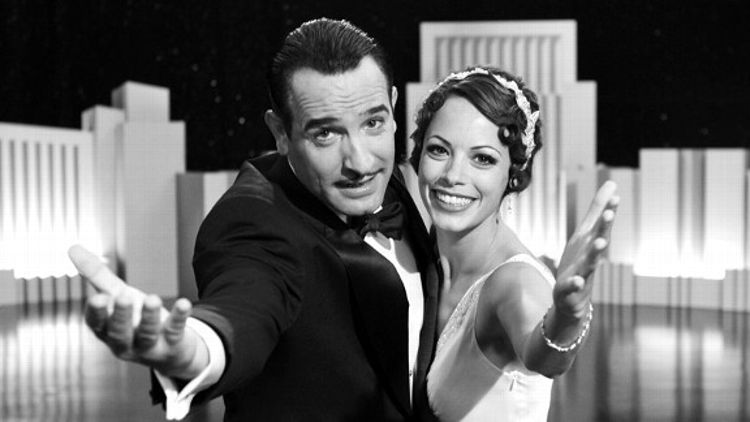 In thinking about the race for Best Picture this week I found myself drifting unhappily back to the 1980s, specifically to a stretch during which the Oscars reacted to an uncertain (i.e., post-Raging Bull) period in high-end American moviemaking by retreating to a safer, more virtuous and conservative definition of “prestige” films. In a period of just seven years, Best Picture Oscars were won by Chariots of Fire, Gandhi, Amadeus, Out of Africa, and The Last Emperor. Some of those movies were good, and all of them had their virtues. But collectively, all they told us about the world and times in which they were made is that apparently nobody in 1980s Hollywood wanted to think about 1980s America.

This year’s Best Picture contest is starting to feel afflicted by a similar sense of what I would call belligerent nostalgia. The two movies to win high-profile prizes so far, The Artist and Hugo, are both being hailed as odes to the early days of cinema. But really, they’re not. The Artist tells you everything it knows about the painful transition from silents to talkies in its first 10 minutes: It’s an undeniably charming but extremely slight comedy-drama that mimics the most basic elements of silents (They were black-and-white! The screen wasn’t wide!), but seems more engaged by their poignant quaintness than by the visual language, wit, beauty, complexity, or psychological richness of the movies it purports to honor. And as enchanting as it can be to enter the glittering, hermetically sealed but vividly three-dimensional toy chest/train station universe that Martin Scorsese has created in Hugo, there is something slightly self-adoring about the story it tells. Hugo is not a valentine to the dawn of movies — it’s a valentine to people who send those valentines, a halo placed lovingly atop the heads of cinephiles and film preservationists. (And, not incidentally, film critics and Oscar voters.)

I’m all for venerating old movies, and if I’m a bit resistant to the allure of The Artist and Hugo, it may be because they practically grab you by the lapels and order you to feel a childlike sense of wonder, goddammit! But as the plot of a third Best Picture contender, Woody Allen’s Midnight in Paris, reminds us explicitly that nostalgia for values you never actually held from an era you yourself didn’t live through isn’t really nostalgia — it’s sentimentality.

At this point in the Best Picture contest, The Artist’s biggest problem is Hugo, Hugo’s biggest problem is The Artist, and Midnight in Paris‘ biggest problem is that these two newer, higher-profile movies are now vying for the “let’s go on a magical journey to a more inspirational time” voting demographic that Allen has had to himself for most of 2011. A lot of advertising dollars are being spent on the proposition that this mood, which propelled The King’s Speech to a very 1980s-ish win over The Social Network last year, still prevails.

How broad a swath of the votership does this cover? The bet being placed on faux nostalgia is so large that it extends — inaccurately, I think — to the push for two of my favorite movies of 2011, Terrence Malick’s The Tree of Life and Steven Spielberg’s War Horse. War Horse is told in a language of almost expressionistically heightened emotionalism, and combines Spielberg’s always astonishing technical prowess with a kind of mythic visual grandeur that few filmmakers since John Ford have dared to traffic in. And The Tree of Life recreates a 1950s Texas childhood in a series of vignettes that are virtually whispered, constructing an entire narrative out of implication rather than emphasis. Yes, it replicates a set of “family values” (some of which prove valueless) that is rarely depicted on-screen these days. But the label “old-fashioned” — despite its status as this year’s cinematic Good Housekeeping Seal of Approval — is probably the least interesting tag you can pin on either movie (though it may be a selling point for both).

I’d be happy to see the Malick and Spielberg films nominated in any season, but it’s still undeniably bizarre: If this turns out to be a year that yields, say, six Best Picture nominees, and those nominees are The Artist, Hugo, Midnight in Paris, War Horse, The Tree of Life, and (speaking of escaping from present-day realities) The Help, what will anyone make of the list 15 or 20 years from now? All they will glean about 2011 is that (a) 2011 was an immensely unappealing subject to the filmmakers who endured it, and (b) an extraordinary number of people either lived in France, came from France, fought wars in France, or really wanted to visit France.

Is this an issue with the Oscars or with the movies? It’s easy to say that Academy Awards are only a reflection of what’s out there. But plenty of 2011 movies are, on some level, about the way we live now, and they’re eminently worthy of consideration. Imagine a list composed, for instance, of Moneyball, Margin Call, The Descendants, Contagion, Ralph Fiennes’ contemporized Coriolanus, and Extremely Loud and Incredibly Close. Collectively, they’d create a very different snapshot of a year and a world — more specifically, a recognizably post-9/11 world in which we are largely obsessed with and freaked out about money and war and an always looming sense of threat. Throw those six movies into a time capsule and, when it’s unearthed generations hence, someone might at least be able to make a reasonable guess as to when it had been buried.

Whatever the final Best Picture roster of between five and 10 movies turns out to be, it is likely to be drawn from the dozen movies above, plus the still-officially-undiscussable Girl With the Dragon Tattoo. But this year, the mood of the awards universe is listing so strongly in one direction that the roster could well be composed of all of the voyages into the past from Column A plus just two of the more contemporary movies from Column B: The Descendants and either Moneyball, Extremely Loud, or Dragon Tattoo. Any other nominee would be a major surprise.

And a major surprise is something I’m rooting for, because it still feels too soon for the Oscar commentariat, a handful of critics, and the considerable forces of movie publicity to have predetermined the final lineup. But we’re running perilously low on time for anything unexpected. By a week from Thursday, the Los Angeles Film Critics Association, the Broadcast Film Critics Association, the American Film Institute, and the Golden Globes will all have announced their winners and nominees. And any movie or performance that hasn’t at least gotten a mention by then is going to have an almost impossibly difficult time reaching the radar of Oscar voters.

So just before the door closes, we may as well acknowledge that although the Oscar race is many things, “fair” is not one of them. A few days ago, Hollywood Elsewhere’s Jeffrey Wells raised the provocative question of what might have happened if Fox Searchlight had reversed the release dates of The Descendants and Tom McCarthy’s Win Win, which opened way back in the spring and thus has only the faintest pulse (primarily for its screenplay) in the awards conversation. Both are movies about families caught in the grip of a pressing financial decision (although the one in Win Win is a lot more relatable); both films are about how those families reform themselves after a rupture of the status quo — in The Descendants it’s an unexpected loss and betrayal, and in Win Win it’s an undesired arrival — and I’d argue that the performances of Paul Giamatti and Amy Ryan are every bit as worthy of attention as those of George Clooney and Shailene Woodley. But in the Oscars, out of sight is out of mind.

And sometimes “out of sight” becomes brutally literal. On Twitter last week, an outcry arose that made it all the way to Time over Fox Searchlight’s decision not to send Oscar voters or critics’ groups DVD screeners of Kenneth Lonergan’s troubled, long-delayed, imperfect but fascinating film Margaret. For a company long known as one of the most filmmaker-friendly in the business, it’s an uncharacteristically sour and petty decision. And also an unnecessary one: Searchlight can more than easily afford to be generous to a movie by a two-time Oscar nominee that hasn’t gotten a fair shake (Margaret received only a token release in single theaters in a couple of cities and grossed less than $50,000, although it’s recently opened to some very strong reviews in London).

Sure, Academy voters get to choose for themselves, but they don’t get to choose what they get to choose from — and without DVD screeners and a campaign, Margaret doesn’t exist. The same is true for Paddy Considine’s well-regarded Tyrannosaur, which took prizes for Best Picture, Best Actress, and Best Debut Director at the British Independent Film Awards over the weekend, but in the U.S. is in the hands of Strand Releasing, a small, consistently thoughtful indie company that simply can’t afford the kind of full-scale promotional push that would give the movie a real awards profile.

This isn’t the old complaint about the lack of a level playing field; we’re talking about a system that doesn’t even allow certain movies onto the turf. Which is why it was infuriating to see Academy president Tom Sherak write to voters last week that while watching DVD screeners may be “tempting,” seeing movies in a theater is “the only way we can insure the integrity of the process.” That actually has nothing to do with integrity: It’s perfect-world thinking from inside the Academy bubble. Yes, in a universe in which 5,000-plus Oscar voters have unlimited free time and every movie worth seeing from the past 12 months is always playing on a big screen within a convenient distance from their homes, no matter what part of the country they live in, Sherak is right.

But that’s never going to happen, so the practical effect of his anti-screener admonition would be to limit the pool of Oscar contenders even more — to the already-too-lopsided calendar of year-end releases, plus whatever movies can afford a multicity rerelease or a robust schedule of special screenings. Indies and small movies, which depend on DVD screeners to give them even half a chance, would be even more marginalized. Nobody wants Best Picture decided by a group of voters lazily half-watching a film on their iPads. But at this moment, the Academy should be encouraging its members to see as many movies as possible — by any means and, yes, in any medium, necessary.

OK, over to you: As I’ve said, right now the 10-movie pool looks to be as follows (alphabetically): The Artist, The Descendants, Extremely Loud and Incredibly Close, The Girl With the Dragon Tattoo, The Help, Hugo, Midnight in Paris, Moneyball, The Tree of Life, and War Horse. Now I’d like to hear from you about which movies not on that list you wish were in the Best Picture conversation. For instance (to name 10): Bridesmaids? Contagion? Drive? Harry Potter 7.5? Margin Call? Martha Marcy May Marlene? Take Shelter? Tinker, Tailor, Soldier, Spy? Shame? Win Win? Tweet me. I’ll be back with results.

The Cabin in the Woods Trailer: Always Take Advice From a Creepy Old Man