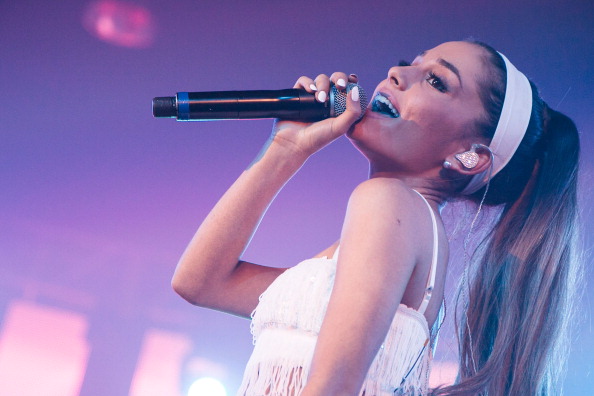 Background: Ariana Grande is a 20-year-old singer and actor from Boca Raton, Florida. Initially known for a role on the Nickelodeon show Victorious, she moved to reprise her character on the crossover iCarly spinoff Sam & Cat last year. She also released her debut album, Yours Truly, which went double-platinum on the strength of its Mac Miller–featuring single “The Way.” “The Way” sampled the same Brenda Russell song as Big Pun’s “Still Not a Player,” Grande immediately garnering comparisons to Mariah Carey for her four-octave soprano voice. Grande says the person who really inspired her most was Gloria Estefan, who encouraged an 8-year-old Grande to pursue a musical career after seeing her sing on a cruise ship. Grande is a rising star in pop R&B, and if her stage presence doesn’t quite match up to her voice yet, well, she’s just getting her sea legs. Give her a little time.

Grande is a lapsed Catholic who converted to Kabbalah, is a strict vegan, has three adopted dogs, and last year she opened for Justin Bieber on his tour. She is currently the most squeaky clean pop star in the game. When people compare her to Mariah, they specifically mean early, pre-“Honey” Mariah, the Mariah who had a hyper-wholesome image that was controlled by Tommy Mottola. Grande has a hyper-wholesome image, as well as an extremely childlike face. Whenever she does get styled overtly sexy it’s a little uncomfortable and Lolita-ish. During the promo cycle for her first album, Grande dressed entirely in wide-skirted Betty Draper ’60s party dresses with long styled hair, reminiscent of the kinds of clothes Taylor Swift rocked for years in an earlier phase of her career.

“Problem” is the first single from Grande’s upcoming sophomore album. Grande is maturing, evidenced by a leggy cover photo of her in white thigh-highs, and a guest appearance from the Australian white female rapper Iggy Azalea. The song itself, though? Still pretty squeaky clean. She even performed it for the first time at the Radio Disney Music Awards on April 27 wearing sparkly Mickey Mouse ears. Grande may not be a Disney kid, but right now she owns the kiddie queen throne that Britney, Miley, Demi Lovato, Vanessa Hudgens, and Selena Gomez all stepped down from in pursuit of finding their adult selves. But Grande’s choice of a black leather corset top to complement the Mickey ears seems like a sign that she, too, will eventually start to chafe against the restraints of being a professional good girl. “Problem” is the first step toward taking her fan base beyond the tween sector. She’s got natural talent to burn, is adorable, and has improved her live performing.

Why It’ll Smash: “Problem” went to no. 1 on iTunes immediately. It’s already a certified bop. It’s a positive breakup song, not a barn burner or a torch song, just a cute song to get ready to go out to. If there’s any Mariah song to compare it to, it’s “Shake It Off,” another breezy jam about breaking up and moving on. There are also some Andrews Sisters–ish harmonies that recall Christina Aguilera’s Back to Basics–era hit “Candyman.” The klezmer-beat intro riff will remind listeners of Jason Derulo’s current hit “Talk Dirty” and Macklemore’s “Thrift Shop.” All in all, “Problem” is feather-light without being too saccharine. As with previous Grande singles, it’s often impossible to make out the lyrics, but it doesn’t matter. There’s not a ton of soul or swagger to her vocal runs and riffs, but again, she’s still young, and that’s the kind of thing that develops with more life experience. The whispered chorus is actually Big Sean. It’s lethally catchy.

Liabilities: Look, any song becomes annoying when you hear it a billion times. The weak link here is the guest verse by Iggy Azalea, who keeps calling herself “Iggy Iggz.” She raps some clean bars about leaving a bad boyfriend behind. The problem with Iggy is that she has nothing to say, and it’s blatantly obvious here. The references to Biggie and Jay Z are the cringe icing on the Lamington cake. I would like her more if she rapped in her real Australian accent about Vegemite.

Previous Summer Jams It Will Remind You Of: “Party in the U.S.A.” by Miley Cyrus, “Hit ’Em Up Style (Oops!)” by Blu Cantrell, “You Belong With Me” by Taylor Swift, “It Must Have Been Love” by Roxette, “Every Heartbeat” by Amy Grant, “Forever” by Chris Brown, “Call Me Maybe” by Carly Rae Jepsen

Current Summer Jam Contender It Will Crush/Replace: Get ready to say good-bye to “Happy.” You’ll miss it once it’s gone!