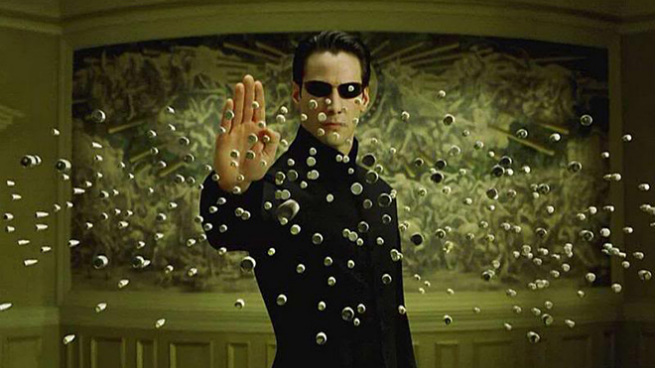 It’s no secret that The Matrix borrowed inspiration from everything from Baudrillard (who rejected an invitation to work on the sequels with the Wachowskis, responding that “[t]he most embarrassing part of the film is that the new problem posed by simulation is confused with its classical, Platonic treatment … The Matrix is surely the kind of film about the matrix that the matrix would have been able to produce”) to Grant Morrison’s comic The Invisibles and everything in between, but when it comes to nailing Warner Bros., the Wachowskis, and Joel Silver for outright theft, legal victories have proven elusive. Yesterday, District Judge R. Gary Klausner ruled in The Matrix’s favor against allegations filed by Thomas Althouse last year. Althouse claimed that aspects of his script The Immortals had been illegally recycled after he submitted the script to Warner Bros. in 1993. The plaintiff has not spent the 10 years that have elapsed since the release of the Matrix sequels gathering evidence; according to The Hollywood Reporter, he didn’t get around to watching them until 2010, which was when he first suspected his material had been repurposed without permission.

Althouse’s script does not lack for an interesting plot: A CIA agent named Jim Reece, who has taken an immortality drug, is tasked with fighting “Hitler’s son, Wagner, and a party of immortal Nazis,” who have been brought back from a cryogenic freeze, imperiling all the mortals roaming the globe in 2235. Sounds just like The Matrix, right? No. As the ruling stated, “the basic premises of The Matrix Trilogy and The Immortals are so different that it would be unreasonable to find their plots substantially similar,” the only through-line being that “both stories portray a protagonist attempting to prevent a dominant group from oppressing and annihilating a subservient group.” Also too weak to hold legal water were common allusions to Christ figures, blue lights emanating from machines, neck plugs/chips, and protagonists who “have an enemy who [sic] they hate.” You want icing on this cake? Warner Bros. claims the Wachowskis had already begun work on The Matrix a year before Althouse submitted his draft.

If all of this is giving you déjà vu, it could be due to The Matrix lawsuit story that won’t die. For 11 years now, the fable of Sophia Stewart’s “multibillion-dollar” legal victory has been circulating, reported as fact on websites updated as recently as 2013. Stewart, who told the L.A. Times in 2005 that she was “the kind of master writer that comes once upon this Earth” (she also said, “The Oracle is me. I wrote myself into my work”), maintains that she answered a magazine ad posted by the Wachowskis in 1986, sending in a copy of her manuscript “The Third Eye” in the hope it would be turned into a comic book. She never heard back, and her materials were never returned to her. (The Wachowskis deny this; at the time, Andy was 18 years old and Lana was a 21-year-old college student.) The case was closed in 2005, with no damages awarded to Stewart, but apparently she’s still stocking up on blue pills.

When someone asks you what your favorite Matrix lawsuit of all time is, though, don’t forget about that time when Tank (Marcus Chong) sued the producers for slander after he was cut from the sequels (for unknown reasons, speculated to be due to salary negotiations). He sought to recoup what would have been his pay from the films, plus damages, after claiming the Wachowskis had — somehow — painted him as a terrorist. Maybe a craft-service terrorist: According to an old Entertainment Weekly interview, cited here, Chong admitted to “crashing a press junket, snatching food from production offices and crank-yanking the Wachowskis” after he had been uninvited from the second and third installments of the franchise. Perhaps he should get in touch with Grant Morrison, who panned the sequels by saying that “[the Wachowskis] should have kept on stealing from me and maybe they would have wound up with something to really be proud of — a movie that could change minds and hearts and worlds.” You know, like one about cryogenically frozen Nazis, something really original. Oh, wait a second. And then wait another second. You know what? Forget it. There are no original ideas. We’re all just copies of Agent Smith.

Filed Under: Movies, The Matrix, The Wachowskis