Every Tuesday, Grantland’s Maester netw3rk, our resident expert in Game of Thrones lore (i.e., he’s “read the books”), will seek to answer lingering questions, untangle knotty backstories, and generally shine the light of Knowledge into Westeros’s darker corners. These learning sessions will be spoiler-free.

Dan asks, “So it appears that Benioff and Weiss have taken a possibly major departure with [[REDACTED]]. Can you give us your thoughts on the ramifications and maybe on diverting from the books generally?”

Welcome, book readers and Thronies alike, to uncharted territory! Game of Thrones has taken liberties with story structure and characters before — Ros and Robb’s wife, Talisa, exist only in the television narrative; Shae and Osha the Wildling play a much bigger role in the show than they do in the books — but always on the margins of the core story. A rearranging of the furniture and maybe some new throw pillows, in other words. But Sunday’s episode, “Oathkeeper,” represented a full-on remodeling, the most significant departure from the novels’ narrative yet.

Doing a side-by-side detailed comparison would be, I think, both too spoiler-y for the show folks and too speculative in general, as certain arcs are fast approaching the edge, and beyond, of our actual canonical knowledge. The once quaint notion that George R.R. Martin, and his increasingly glacial authorial output, could manage to stay ahead of a show that delivers sex and dragons every spring like clockwork is now more fantastical than the actual story. Without mentioning specific changes and whether those changes are for the better or worse (too early to tell on that score), the choices the showrunners made last episode are things that had to be grappled with at some point, due to the way Books 4 and 5 of the series are constructed.

Answers to your burning Game of Thrones questions.
Martin originally envisioned A Feast for Crows and A Dance With Dragons as being one gigantic volume, until several thousands of pages and the realities of modern bookbinding techniques conspired to scuttle that little dream. Splitting the book into two resulted in numerous core characters disappearing from one volume or the other. Obviously, a television show having an entire season where multiple characters don’t appear is a nonstarter, especially when it’s a show with teenagers cast in major roles. Bran is written as a 9-year-old in the books, and Isaac Hempstead-Wright already looks like a mid-1980s Bruce Dickinson from Iron Maiden. The revisions seen in “Oathkeeper” were the first steps toward answering the structural questions posed by the books’ split narrative.

Amos asks, “Who the fuck was that Super White Walker at the end of the episode? I’ve read all the books and I have no idea what the hell happened. Do you?”

OK, this Darth Maul cocaine-fingernail White Walker is something that doesn’t appear in the books, and is a thing I think I can talk about since no one knows what it is. So: I don’t know either, though I do have a theory about what the place is. I think there’s a decent chance we hear about where/what that is this season, or for sure next season, so, let’s just leave it there.

Ran asks, “If all of Cersei’s children were fathered by Jaime, as you indicated last week, did she just never have sex with Robert Baratheon? Because Robert wasn’t sterile — he apparently has bastards all over the place. What gives?”

This is a great question. Episode 2 of Season 1 features a touching scene of motherly empathy mixed with sociopathic attention to detail when Cersei goes to visit Catelyn, who is holding vigil over Bran after his ever-so-tragic fall from a window. Young boys — rambunctious, accidents will happen, after all. Cersei mentions to Cat that her first child died of fever and describes him as “a little black-haired boy.” From our knowledge of Westerosi gene theory, we can safely assume — if Cersei is telling the truth — that this child was Robert’s. Additionally, the books mention the Maesters having access to certain substances that can end a pregnancy. Watch the Purple Wedding again; when Cersei approaches Maester Pycelle, he’s telling a young serving girl to come up to his chambers so he can examine her. Cersei blows up Pycelle’s spot by saying the girl will do no such thing and telling her to “Go see Qyburn, he’s very good.” From this, I think we can draw the conclusion that Cersei not only has used, but also continues to use the services of a Maester (in this case, ex-Maester) as a kind of Westerosi Planned Parenthood.

Who is this Locke fellow, the guy up the Wall who seems to want to help Jon out? 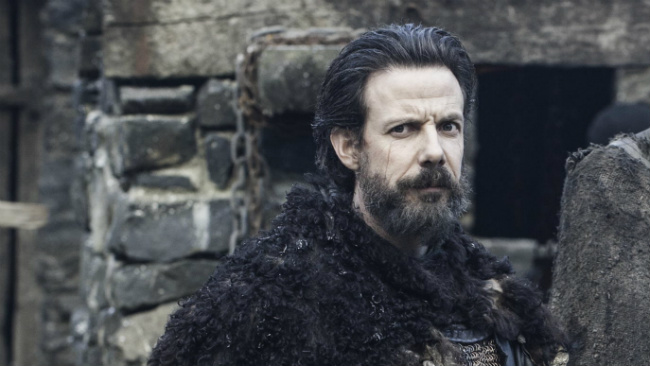 Three seasons and change in the Hobbesian state of nature that is Westeros have, one hopes, taught us to be wary of people who seem to just want to lend a selfless helping hand out of the pure goodness of their hearts. Locke is an agent in the employ of post-Stark Warden of the North and Red Wedding conspirator Roose Bolton. You probably best remember Locke as that dude who cut off Jaime’s hand and tied it around his neck. When Roose returned to the North after the Red Wedding, he found out that Theon Greyjoy’s extended enhanced interrogation had produced information on the young Stark boys, Bran and Rickon — namely, that they are, like, totally still alive and were last seen headed small-N north. The Starks, as we have said before, have ruled the North for basically all of recorded history; they are well loved among the noble houses and small folk of the North. House Bolton — due to its well-earned reputation for depravity, occasional rebellion, and now, oath-breaking — is most certainly not loved in the North. If a Stark heir still lives, Roose’s status as Warden of the North is in jeopardy, whether or not King’s Landing backs him. The North would rise, and quickly, to put a legit Stark back in power.

So, from Roose’s point of view, Bran and Rickon have to die. Jon Snow’s membership in the Night’s Watch is common knowledge, and, as he is the closest known still-living relative of Bran and Rickon, it’s quite logical to assume Jon knows where the boys are and that they are headed to Castle Black. Locke was sent to Castle Black to find out what, if anything, Jon Snow knows about the boys’ whereabouts, and he does a pretty decent job of it. Last episode, when Jon and Sam were in some Castle Black scroll room discussing HOW BRAN IS ALIVE AND PROBABLY AT CRASTER’S KEEP JUST TOTALLY OUT LOUD IN NORMAL SPEAKING VOICES AS IF THIS WEREN’T REALLY IMPORTANT NEWS THAT YOU DON’T WANT PEOPLE OVERHEARING, Locke’s shadow clearly darkened the hallway behind them some moments before he announced himself. That’s why Locke volunteered for the mission to Craster’s. Starks stay not knowing how to play the game of thrones. Learn to fucking whisper, Jon.

Who is the dude drinking wine out of Jeor Mormont’s skull in Craster’s Horror Cabin?

That’s Karl. He was part of Mormont’s initial ranging party, which was smashed by the White Walkers and retreated to Craster’s, where tensions over food led to mutiny and much worse. It’s basically been The Purge 24-7 there ever since.

The other notable mutineer is Rast. We first saw Rast glowering at Jon Snow and Tyrion as the latter two discussed books during the recruiting trip that brought Jon to Castle Black all the way back in the second episode of Season 1. Rast was sent to the watch for being a rapist, so, right place, right time. Also, he killed Lord Commander Mormont during the mutiny at Craster’s.

Who are the Wonder Twins accompanying Bran and DJ Hodor on their magical camping trip?

The siblings escorting Bran north are Jojen and Meera Reed. They are from the swampy, southernmost area of the North known as the Neck, and are part of the Crannogman culture, which I would describe as the North’s version of Cajuns. The Neck is an isthmus that connects the North to the southern regions of Westeros. The most notable landmark of the Neck is the ancient tumbledown fort of Moat Cailin, which commands the Kingsroad; when held, it is essentially impassable. The Crannogmen are known for their stealthy nature, hunting prowess, and guerrilla fighting tactics. Jojen and Meera are the children of Howland Reed, who was a key ally of Ned Stark, which is probably why they came to protect Bran. Hopefully, the relationship between Howland and the late Lord of Winterfell eventually gets explored.

Daniel asks, “How old is Tommen supposed to be?”

The show wisely ages Tommen up. The actor who portrays Tommen, Dean-Charles Chapman, is 16, while, in the books, Tommen is written as a 9- or 10-year-old. So, yeah … this is better.

Where the hell is Daenerys now?

She just conquered the city of Meereen, one of the three city-states of Slaver’s Bay. Slaver’s Bay is exactly what it sounds like, the hub of the intercontinental Game of Thrones slave trade, located on the southern coast of the eastern continent of Essos. The other two cities of the bay are Astapor, where Dany bought her army of Unsullied and killed her first master by dragon fire, and Yunkai, where Dany crowd-surfed on the hands of the emancipated like it was 1994. Shout-out to Dirtbag Daario, wherever you are.

The region around Slaver’s Bay was originally the heartland of the Ghiscari Empire, a regional rival to the Valyrian Freehold. (I wrote about the Valyrian Freehold here.) The two empires vied for supremacy in the region, but Valyria had dragons and the Ghiscari didn’t. Valyria conquered the area about 5,000 years ago, razed the Ghiscari capital of Old Ghis, and began colonizing the region. After the Doom of Valyria, the cities broke free of centralized rule and became independent states unto themselves, with Valyrian as their language. Despite being essentially Valyrian, the post-Doom citizens of the cities of Slaver’s Bay adopted many of the cultural accoutrements of the old Ghiscari Empire, and the local patois is peppered with Ghiscari loanwords, such as mhysa, which means “mother.” So, there’s some irony that the descendants of the Valyrians who conquered the Ghiscari with dragons have since wrapped themselves in the trappings of Ghiscari culture, and are now being conquered by a Valyrian with dragons.

So, if they speak Valyrian, why was “Kill the masters” written in English?

The stand-in for English in Game of Thrones is “the Common Tongue.” So, really, “Kill the masters” was written in the Common Tongue, which is weird anyway because the masters of Meereen speak Valyrian, so what gives? My guess: Creating a Valyrian alphabet and written language is not something a person does when they have an actual life. The spoken Valyrian language of the show was created by linguist David J. Peterson, who also created the language of the dark elves from Thor: The Dark World, and if you know what those two things are, and I do, consider taking a long walk outside to let the sunlight fall upon your flesh.

Andy asks, “Does winter come to Essos too? Will the Braavosi have to give up their beachwear for a generation?”

The unpredictable length of seasons in the world of Game of Thrones is probably best chalked up to magic. Whether winter, as Westeros experiences it, also affects Essos is undefined right now. My guess is that it does, but we really don’t have an answer.

Zapruder 2: How Did Littlefinger and Lady Olenna Poison Joffrey?

Grantland’s own John Lopez wrote up a second-by-second analysis of possible Joff poisoners a few weeks ago. Now that we know who was involved, how did they do it? 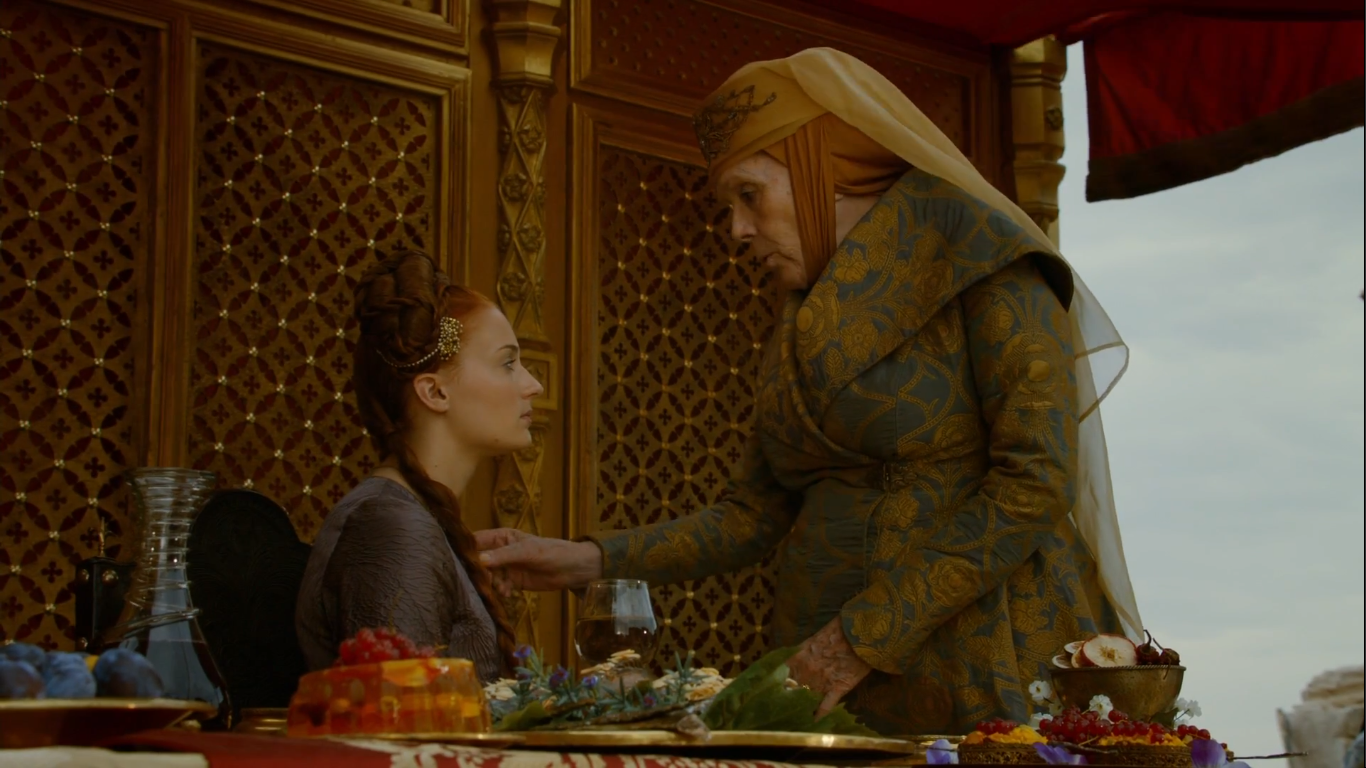 Lady Olenna moves in for the concern troll. 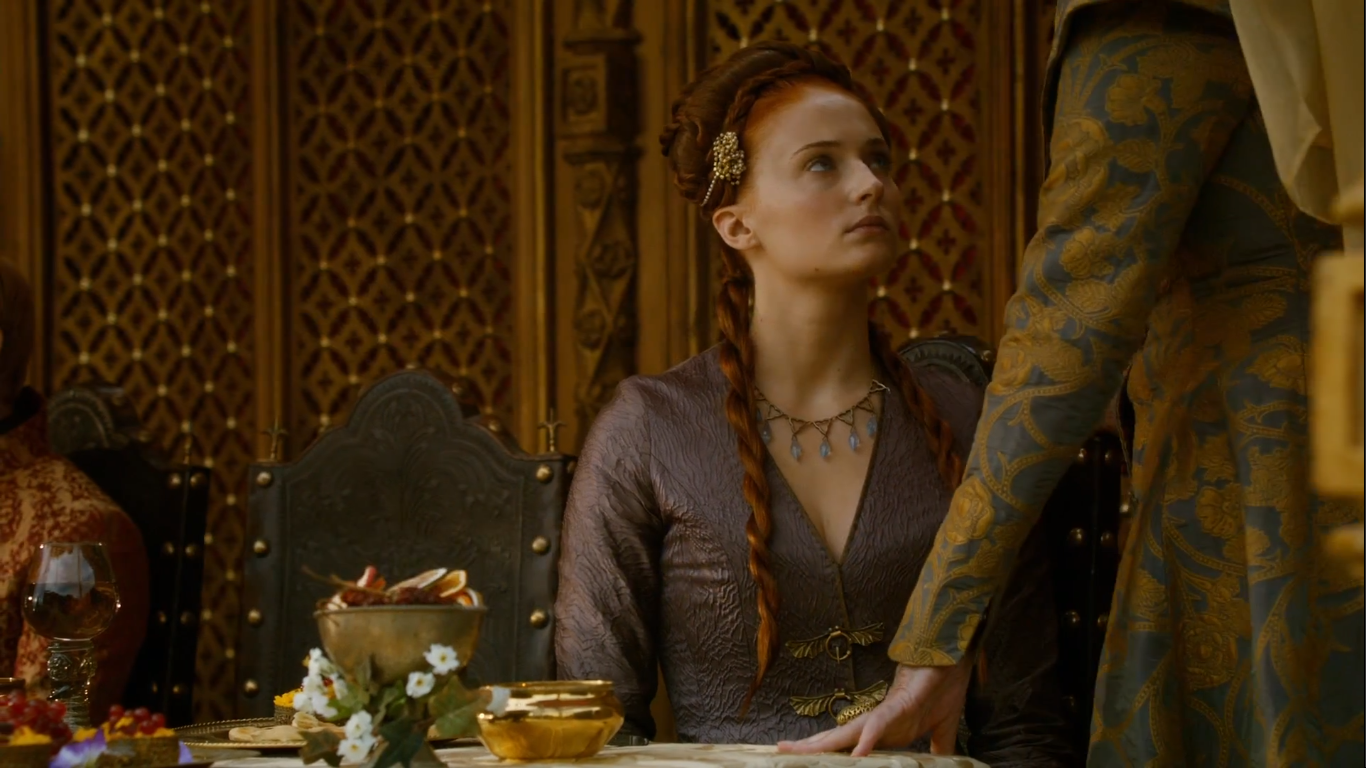 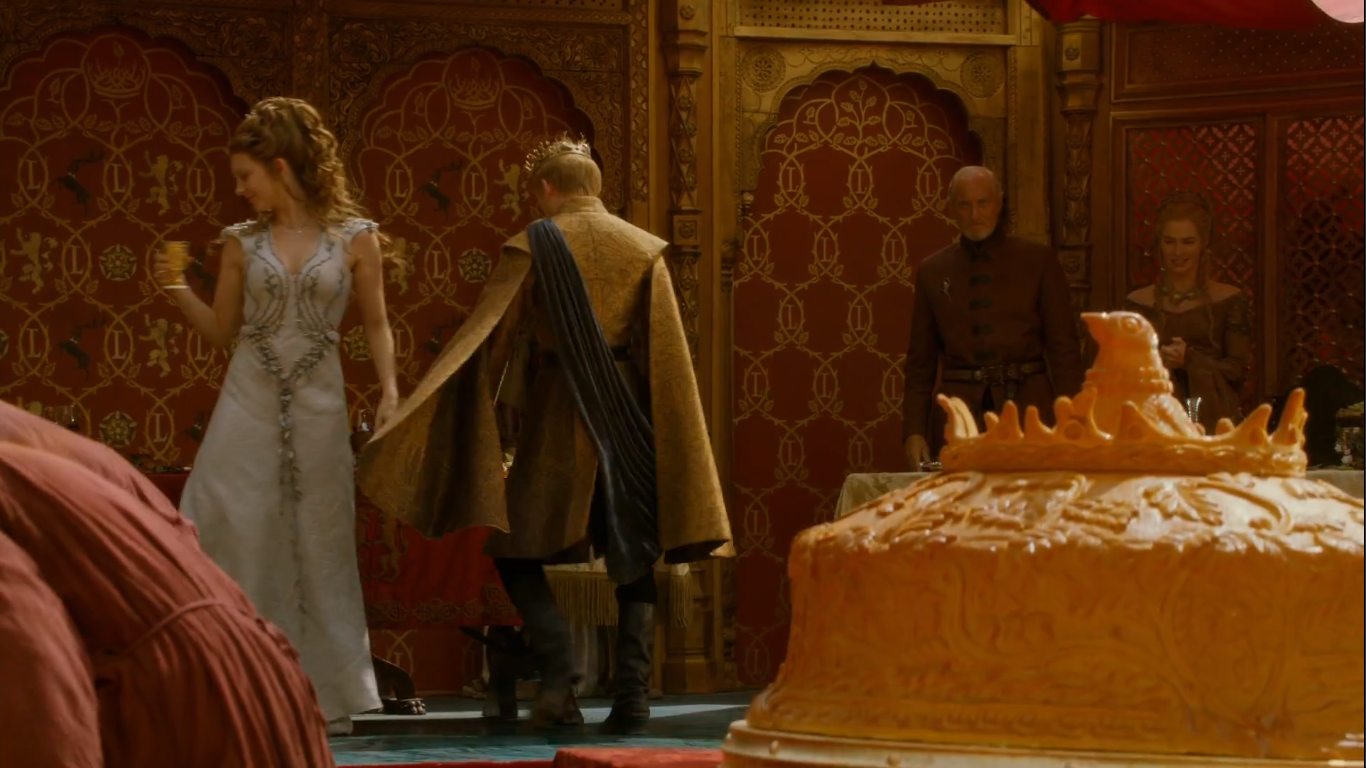 Margaery with the unwitting assist. 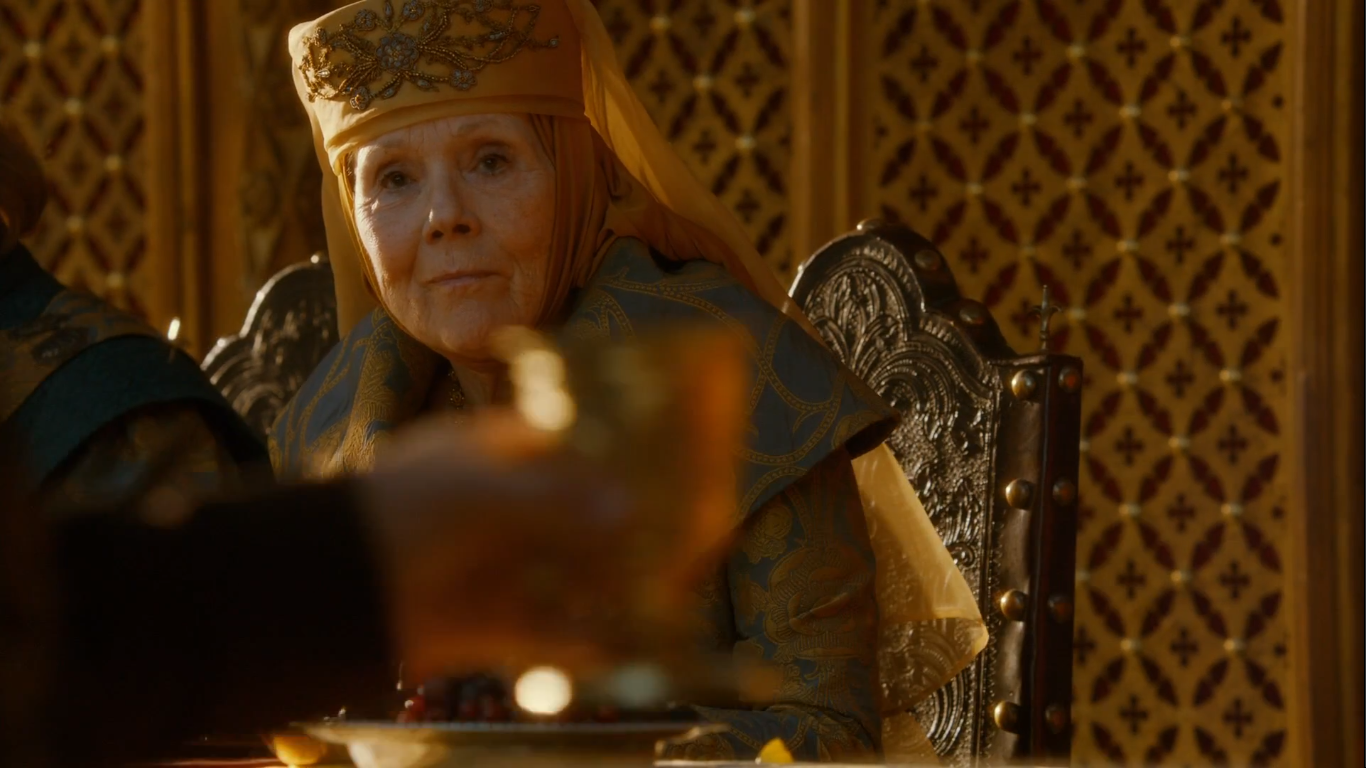