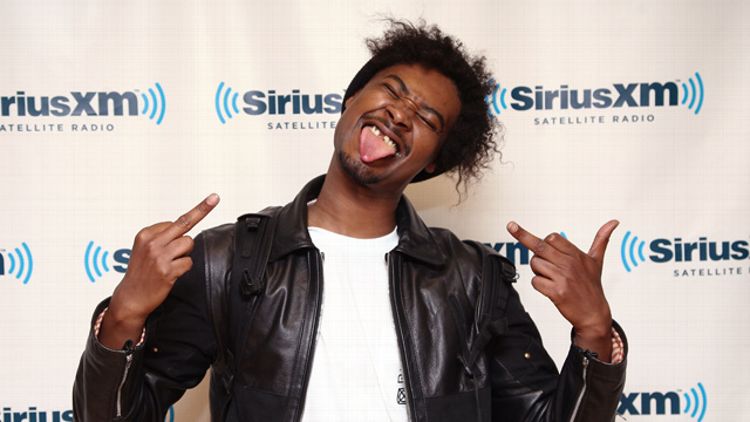 The idea was simple enough. Danny Brown — the 32-year-old drug-guzzling Detroit MC who has made some of the rawest, oddest, and best rap music of the last few years — has a new album. It’s called Old. So let’s do stuff that old people do.

OK, but … what kind of stuff do old people do? I mean, yeah, all kinds: lead countries, play first violin in various international philharmonics, win Nobel Prizes. Specifically, though, for our intentions here, we were talking “stuff old people do” of the generally clichéd variety (the 2009 IGN.com commenter thread “Let’s list things that old people do” was quite helpful during the research phase). Please believe me when I say that this was ageism of only the best-intentioned kind.

And, to his great credit, Danny Brown — early, on a Monday morning, in his own hotel room — was down. 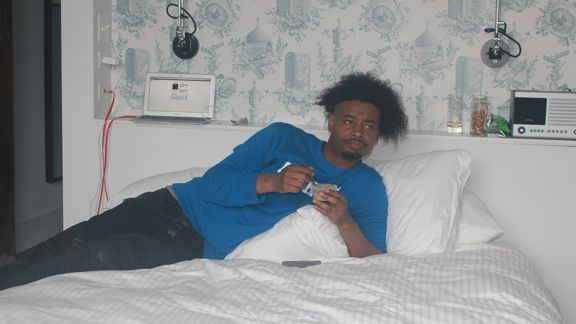 “I’m hungry!,” Brown says, as I hand him a tin of Mott’s cinnamon applesauce and a spoon. “A little herb, some applesauce. That’s a nice breakfast.” He dives in, smacking thoughtfully, and after a few seconds: “It’s all right. It’s all right. Taking me back to kindergarten right here.”

When did you come up with the album title?
My homeboy Kwele, he hit me up one time. He said, “I was talking to Roc Marciano and he said you should name your next album ODB. Like, Old Danny Brown. OG Danny Brown.” I was like, that’s tight. Eventually, as time progressed, I figured out a way to drop the rest and just make it Old. It has nothing to do with age. Even though I’m eating applesauce. Out my front teeth. I don’t know if I can eat all this. This a lot of applesauce. [He keeps eating.]

Where in Michigan do you live now?
I live in Royal Oak now [outside of Detroit]. I lived on the east side and west side of Detroit. I’m from neither side.

I went to school in Ann Arbor, which I know is not much like …
Ann Arbor’s tight! I like Ann Arbor.

Oh, nice. You ever hang out at that bar 8 Ball, underneath the venue the Blind Pig?
Nah. I just go down there, use the ATM to buy weed. When I’m up there, they always bring me mad edibles. I don’t really care about edibles. They always tryna push edibles on me up there. I want the flowers, man!

Do you remember the first time you got high?
My mom smoked weed. I just remembered my house always smelling like weed. So I liked the smell. First time I got high I didn’t really like it that much. I came home, my mom said, “Boy, you high? [Pause.] You better share.” I’m telling you, my mom didn’t let me smoke unless I smoked with my mom. Started smoking blunts with my mom. That was like 16, but I didn’t smoke weed everyday until I was like 18.

Was weed right away something that helped you make music?
That’s the thing. When I was like 16, I wrote raps every day all day. And then once I really started smoking weed every day, I stopped writing raps in general. Didn’t rap for like two years almost. Which kind of fucked me up! [Laughs.] I didn’t write a rap. I didn’t think about rap. Just hustlin’ and shit.

What else has changed between then and now?
Back then what I didn’t know is, just don’t care about nothing else. Back then I cared about everything. I had to have the cool girl song … I thought like every other rapper probably thought. Had to have my content the same way as what I heard on the radio, or what I seen on TV. Thought that’s how it was. Now [I know] what people gravitate to more than anything is somebody that’s genuine. Nobody likes being lied to on nothing. So damn sure nobody wanna be lied to on music.

So you weren’t quite as honest back then.
I probably would just talk about some gangster shit. I would never talk about the other side. I don’t know. I can’t even say that. I always had my little sad songs. [Looks at applesauce.] Mott’s applesauce. This hot applesauce. I like it cold. Cold applesauce. Got to throw them shits in the refrigerator, know what I’m saying?

Activity No. 2: Watching the News

I start segueing to our next Old People activity, then realize that, as it happens, the TV in the room is already tuned in to MSNBC. I point out that Danny’s already watching the news and Dart, Danny’s manager, cracks: “Yeah, ’cause he’s old!”

So you’re already watching MSNBC.
They had some fuckin’ shit: Sex Trade in the Motor City. I ain’t know it was going on like that back home! I was watching that shit last night. It was tight. It wasn’t tight … I remember, two girls got burned up in Detroit, Backpage Killer and shit … I ain’t be out there fucking with the hoes! I ain’t be riding the streets of Detroit in the late nights! I ain’t know it was like that!

What else do you like, as far as the news?
I usually watch cartoons, but Cartoon Network is not on here. So I was just watching the news. That’s how that came about.

You’ve got artists like Purity Ring and Charli XCX on the album, and I know you listen to a lot of different stuff outside of hip-hop. Were you always like that?
My dad was a house DJ, so he listened to everything. Roy Ayers and shit like that. The biggest album in my family was fuckin’ Loose Ends, you know what I’m saying?

So you always knew about the Detroit electronic scene.
I knew about that, I feel like, before I even knew about rap. I remember, the time I heard my first rap album was kindergarten. I feel like soon as I was born [my parents] were listening to that [electronic] shit. At house parties, on the car — it wasn’t like they’d listen to the shit that was on the radio, because we always liked our music super fast. 140 BMP. That’s why it wasn’t hard for me to transition to rapping double time and shit like that.

Does your dad weigh in on your music now?
I mean, he encouraged it. I can say that. But I don’t talk to my dad about my music like that. He get too critical. Some of his [favorite] shit be the shit where I just say some relatable shit. Other shit he probably don’t … he like, “You weird” [laughs].

But my dad is crazy. Last time I saw him he was listening to Young Jeezy. The second one, The Inspiration or whatever. I’m like, “Why you listening to this album?” “It’s the shit.”

Activity No. 3: Taking a Nap

This one didn’t go over so well. Danny: “I don’t wanna get too comfortable and fall asleep. Whatever other ideas we got here … ” 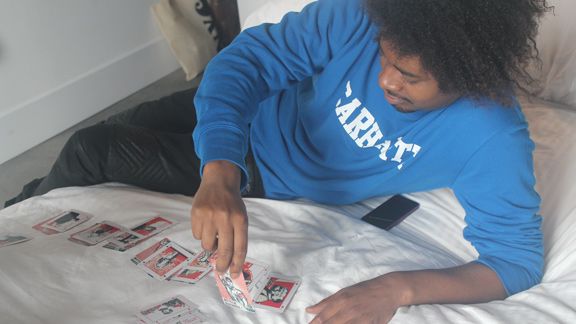 This one went over only incrementally better. We break out the deck of cards (a commemorative Mao Zedong set, incidentally), and Danny’s immediately apprehensive: “What are we playing? Go Fish? I don’t play cards.” His publicist Jaime has a suggestion: “You should play solitaire. My grandma always plays solitaire.” Dart agrees: “That is definitely the OG old-people activity.” Danny has to concede the point: “My grandma play solitaire all day. Real shit. Solitaire. All day.” It turns out, though, that Danny himself has never played. That’s right: We’ve captured Danny Brown’s first-ever game of solitaire.

Jaime gives him a hand running through the deck while he chimes in inquisitively: “The four up here? What? Then what’s that supposed to do for me?” Gamely, he plods through for a while, explaining that he’s never done much of anything with cards: “I never was good at gambling. Always lose my money.” I ask if he ever went up to Windsor, Ontario, the casino town across the river from Detroit, and he points out that that would have been difficult because of certain criminal indiscretions: “Hell no! They just now let me in Canada.”

After a little while, Danny’s patience runs out: He abandons the solitaire and yanks out his PlayStation Vita to rock with some FIFA ’14. “I’m not down with this!” he announces. “I don’t wanna do none of this part of the game.” Then: “Old people like to smoke cigarettes. Can I go smoke a cigarette?”

Activity No. 5: Complain About Young People

Got any complaints in regard to young people?
Any complaints? I mean, at the end of the day, young people want everything too fast. The Internet made you not patient. They wanna shoot a video every day. They wanna make a mixtape every month — you wait six months, you could probably make a great mixtape. Then they realize why they can’t get shit going, can’t make money off this shit. ‘Cause you oversaturated your shit before you even got it started!

Do you remember your own strategy from when you were first breaking through?
I had did so much. So once I got going, I was happy to be. Now, certain shit get on my nerves. But at that time I was down for whatever. I played so many free shows. I just rapped in front of so many people. For no reason. That was a big deal for me. But I’m glad I did that. Because now being on that stage is second nature.

Was there one show in particular when it dawned on you, like, “Oh shit, I made it”?
Nah. I don’t think so. Not from shows. A big show for me was playing Fader Fort. And I got hit in the head with a lemon. So it was like, what the fuck. I never get pumped up about a big show. Every show is whatever.

To be honest: I had one more activity planned. I had a few coins of various foreign currencies, and I was going to give them to Danny as a means for him to start a coin collection (this is a thing that old people do? Collect coins?). But it wasn’t even noon yet, and he’d been such a good sport so far, and I just couldn’t do it. Instead, I suggested, should we go smoke that cigarette? “That would be nice.”

We headed to take the stairs down because the elevator apparently smelled weird (“It just reminds me of something bad in my life. I don’t know what”). The next stop in the day for Danny was a specialty pet store on the Upper East Side: He has a Bengal cat that he likes to spoil — “she got her own kitty house, jungle gym shit, towels and shit, all type of little dumb toys” — and he was going to try to see if he could find some more knickknacks for her. As for as himself, he explained, he doesn’t have too many expenditures. “I always buy clothes and shit,” he said. “But, I mean, I don’t drive a car. I don’t do jewelry. I’d lose that shit. Take a Xanax or some shit and forget where I put my chain.”

Right before we left the room, Dart pointed to the stash of Mott’s and asked, “You want the rest of the applesauce?” Danny, politely enough, waved away the offer: “No more applesauce.” 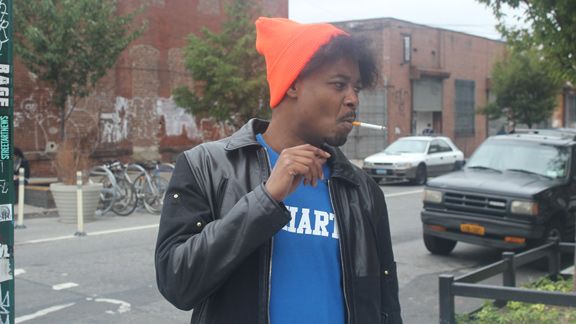