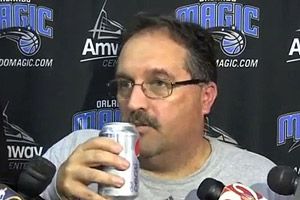 Stan Van Gundy and Dwight Howard starred in what might be the most cringe-worthy impromptu press conference of the NBA season on Thursday. But you know who, or more accurately what, stole the show? Stan Van Gundy’s Diet Pepsi can.


Ah yes, the Diet Pepsi can. Prop of the haggard worker everywhere. Here are the Stan Van Gundy Diet Pepsi Can Power Rankings:

SVG uses the soda can to acknowledge the higher power in charge of his fate. The sarcastic way he does it tells us that higher power is Otis Smith.

You know how on basically every television show ever, there’s a scene in which one character is talking about someone behind their back, and that person suddenly appears, standing behind said character? It’s the Harry Crane-Megan Draper situation. Isn’t this basically what happens right here? Did SVG see Dwight coming out of the corner of his eye and keep on keeping on? Or does this last, deep gulp represent Stan taking a final breath before one of the most awkward encounters ever captured by cameras takes place?

The “Reality Point,” wherein SVG cocks the can toward the media, emphasizing his and the gathered throng’s insignificance in the larger context of, like, the universe.

The extended, long swig. Right about here, you kind of wonder whether SVG is thinking, “Holy shit. I am actually doing this? Why am I sweating and freezing at the same time? What do I do with my hands? Why do I feel like I’m about to barf? What time is it? My lower back hurts. Diet Pepsi.”