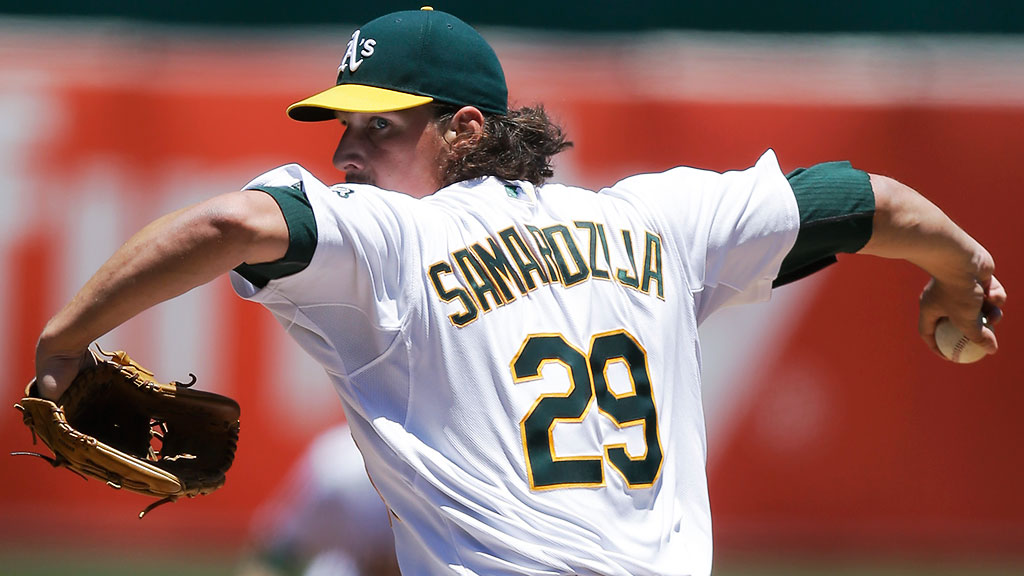 The Chicago Cubs and Oakland Athletics pulled off a blockbuster trade over the holiday weekend, signaling the small-revenue Athletics’ commitment to winning now and the mega-market Cubs’ desire to keep costs down until they’re fielding a contending team at some point in the future.

Oakland acquired veteran right-handed starters Jeff Samardzija and Jason Hammel, while the Cubs picked up top shortstop prospect Addison Russell, Class A outfield prospect Billy McKinney, right-handed starter Dan Straily, and a player to be named later. The trade could alter this season’s World Series chase, and could have far-reaching implications for both teams.

At first glance, it might seem odd the A’s pursued starting pitching this aggressively, since Oakland starters led the American League in ERA and park-adjusted ERA before the trade. A closer look at recent numbers reveals some troubling trends, however. As ESPN.com’s Tristan Cockcroft noted in his most recent Fantasy Forecaster article, A’s starters had posted a 5.93 ERA in the last two trips through the rotation, from June 22 to July 2. After flashing a 1.99 ERA in his first 10 starts, Sonny Gray has posted a 4.81 mark over his last seven; he’s also in his first full major league season, meaning no one knows how much he’ll have left in the tank come September, let alone October. And like Gray, Jesse Chavez looked nearly unhittable to start the year, but he’s posted an ERA above 4.00 over his past nine starts while surrendering 59 hits in 51⅓ innings; Chavez, a journeyman entering this season, wouldn’t have cracked the rotation if Jarrod Parker and A.J. Griffin had not suffered season-ending injuries. Meanwhile, Drew Pomeranz broke his hand while punching a chair, and his replacement, Brad Mills, allowed 27 baserunners in 16⅓ innings during his brief audition as the fifth starter.

Even the team’s two best recent starters carried question marks. Scott Kazmir is one year removed from being a minor league pickup in Cleveland, and his injury history makes it tough to feel completely confident in his health, even as he’s emerged as one of the AL’s 10 best starters. And while Tommy Milone had gone 6-0 with a 2.62 ERA in his past 11 starts, his success was fool’s gold built largely on flukishly strong results with men on base and in scoring position; the A’s sent him down to Triple-A after the trade. Oakland’s starting five were unlikely to flourish for much longer, and the team knew reinforcements were badly needed.

By landing Samardzija and Hammel in the same deal, the A’s addressed that growing need while also continuing to abide by the roster-building method that has them on pace for a third consecutive AL West title: spread risk by diversifying the roster. Numerous reports claimed A’s GM Billy Beane and Rays GM Andrew Friedman were discussing a deal involving Russell and Tampa Bay ace David Price, and while we may never know why the deal failed to solidify, Beane made good on his depth-and-no-weaknesses approach by nabbing two good starters instead of one great one, eschewing the stars-and-scrubs tack richer rivals often employ.

Samardzija paid immediate dividends Sunday, limiting the reeling Blue Jays to four hits and one run in seven innings while pushing the A’s to a four-game sweep. Shark had a terrible June, posting a 5.45 ERA and .879 OPS against, and that dip in performance coupled with some skepticism about his move from the lower-run-scoring NL Central to the tougher AL West caused some hand-wringing over the Athletics’ willingness to surrender their top two prospects, according to Baseball America. Samardzija has several factors working in his favor, however. First, the 29-year-old figures to cost about half as much as Price will between now and when they both become free agents at the end of next season. Second, Shark went from the NL’s third-worst defensive team to the AL’s best, according to Baseball Info Solutions’ Defensive Runs Saved stat. Third, he went from a team with a mediocre bullpen to one with an elite relief corps, which means he can pitch with confidence for six or seven innings, knowing the pen will likely protect the lead he built. Throw in Samardzija’s excellent ground ball rate, and the A’s clearly felt confident their big pickup could survive the rigors of the American League, Trouts and Cabreras and spelling bees and all.

Hammel is the piece that could nudge this deal over the top for Oakland, though. Pick a stat, and Hammel’s numbers are nearly identical to Samardzija’s. Hammel has actually bested Shark in strikeout-to-walk rate, and ranks just an eyelash behind in ERA (2.98 to Samardzija’s 2.74) and fielding-independent pitching (3.17 to 3.02). Hammel is essentially a three-pitch pitcher, throwing a four-seam fastball, a sinker, and a nasty slider a combined 90 percent of the time, and that slider has produced more value than any other pitcher’s this year. Hammel is 31 years old and can become a free agent at season’s end, so barring a contract extension, he won’t be in Oakland for long. In a trade market that probably won’t deliver many blockbusters, however, he’s a solid midrotation addition for a legitimate contender.

While Samardzija and Hammel give the A’s five starters who rank among MLB’s top 36 in ERA and make the organization the most dangerous World Series contender it’s been since the height of the Moneyball era, Oakland’s prospect losses are Chicago’s gain.

All those prospects are position players with staggering potential. The 22-year-old third baseman Kris Bryant is batting .355/.451/.720 with 30 homers in 87 games across Double-A and Triple-A, and he looks like one of the best hitters to come through the minors in years. The 21-year-old shortstop Javier Baez has struck out 105 times (while walking just 28 times) in 79 games, but he’s also very young to be playing at Triple-A, where he’s racked up 32 extra-base hits and 15 steals this year. Injuries have limited 22-year-old outfielder Jorge Soler to just 15 games this year, but he’s banged out 10 doubles and two homers in that limited playing time and projects as a future middle-of-the-order major league hitter if he can stay healthy. The 22-year-old infielder Arismendy Alcantara, 20-year-old outfielder Albert Almora, and 19-year-old McKinney round out a killer group of front-line prospects.

Russell could become the best player of the whole bunch, though. Just 20 years old, he’s already at Double-A (after a brief end-of-season cameo at Triple-A last year), where he’s showing off his combination of extra-base power, promising plate discipline, speed, and athleticism. Scouts believe Russell’s defense will remain strong enough for him to stick at short, which is rare: Many top prospects start off as shortstops because that’s where the best athletes tend to play in high school, and then eventually move to other positions. The A’s adopted a flags-fly-forever mentality in parting with Russell, who has a chance to become one of the best shortstops in the majors if he keeps developing at this rate.

And if he does keep developing at this rate, the Cubs could face some tough personnel decisions in a year or two. They’ve got two under-25 infielders locked up in Anthony Rizzo and Starlin Castro. Rizzo is in the midst of a breakout season, batting .276/.384/.487 while playing smooth defense at first; he’s signed through 2019, or 2021 if the Cubs pick up both of his club options. Castro has also put up numbers this season, batting .287/.332/.465, but he’s also been a poor defender for most of his five-year career, and he plays a position that two elite Cubs prospects also play. If Baez and Russell both pan out, one will probably move to second base, while the other will stay at short. If Bryant continues developing, Castro, who’s signed through 2019 with a club option for 2020, will be blocked at third base as well. While the odds of all these prospects becoming MLB stars are admittedly slim, the Cubs could end up with surpluses at one or more positions in the next couple of years, creating some intriguing trade possibilities.

They’ll need ’em. While Theo Epstein, Jed Hoyer & Co. deserve credit for signing multiple pitchers to short-term deals and then converting them into tasty returns at the deadline — Scott Feldman and Hammel chief among them — the Cubs remain thin on big-time pitching prospects in the high minors, meaning they’ll likely need to make more deals or open the vault to sign free-agent talent if they hope to build a championship-caliber staff. And that’ll be true even if Jake Arrieta’s breakout first half proves to have legs.

Lots of trade possibilities have started floating around already, including engaging the pitching-rich/hitting-needy Mets in talks for big minor league right-hander Noah Syndergaard. There’s no major rush, however. The Cubs will likely field offers for Justin Ruggiano (.286/.364/.476 in a weak market for hitters), Luis Valbuena, Travis Wood, Edwin Jackson (no, really, take him!), and most of their other veterans. They’re going to finish last for the second year in a row and fifth for the fifth year in a row, including the days before the Astros left for the AL.

And for now, that’s OK. The Cubs have committed themselves to a slow and steady rebuilding process, which has them drafting high every year, spending well over the limits on international talent when the opportunity presents itself, and netting tens of millions of dollars in annual profits for team ownership. Aggressive losing has become in vogue for rebuilding teams; hell, the Astros just landed a Sports Illustrated cover for losing tons of games while carrying a tiny payroll. If the Cubs’ wealth of young talent pays off in 2016, 2017, or even later, the end will presumably justify the means — and the wait. Until then, North Siders might have to settle for watching Samardzija and Hammel taste October glory with another team.